Hello, Travelers! Your Genshin Impact dev team is back once again, bringing you details for Version 1.6 coming on June 9. As the world of Teyvat enters the hot summer season, in the upcoming update we’ve prepared for you tailor-made summer outfits and a brand-new series of sea and island adventures to refresh everyone from the heat. Meanwhile, Kaedehara Kazuha, the first new playable character from Inazuma, will join in and lead the Archon Quest to a new chapter.

Travelers who’ve completed the main storyline in Liyue will be able to move onto the new Archon Quest with Kazuha. You may also spend some of your splendid summertime in Teyvat in an uncharted sea area for a limited time during Version 1.6. 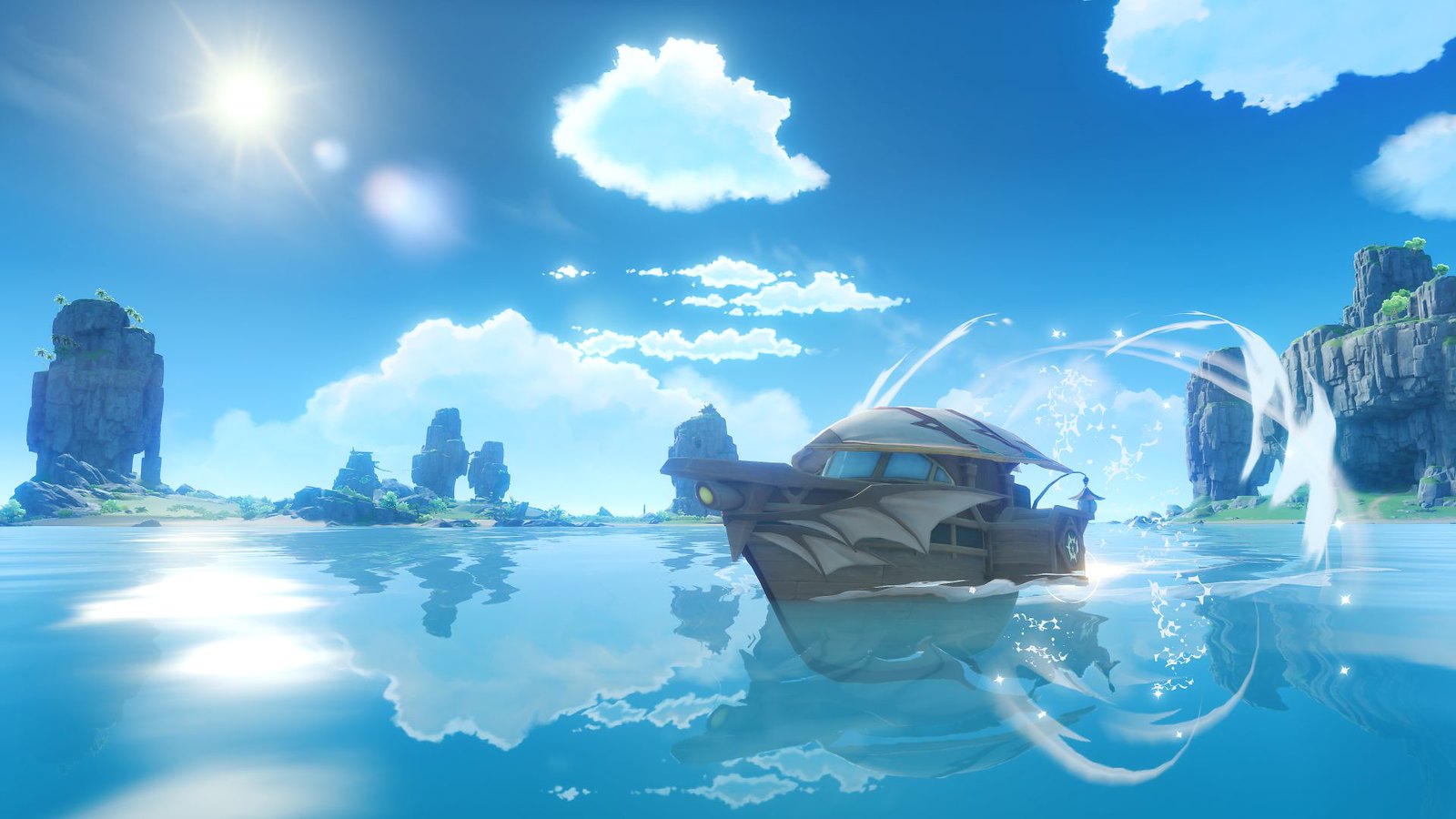 If you’re fond of sailing, exploring, and fighting, we may have something for you in Version 1.6’s main seasonal event: Midsummer Island Adventure. The story begins when Klee receives a mysterious letter from a Dodo-King threatening to take Dodoco away from her. To help Klee and Dodoco, the Traveler will sail on a boat called a Waverider and explore a secluded archipelago scattered over a remote sea area.

The Midsummer Island Adventure main event will be divided into four stages, each featuring unique gameplay. In the first stage, players need to sail on the Waverider and destroy enemy floating towers and encampments, either through firing your boat’s cannon or in close combat. In the next stage, players will be challenged in a race that combines both sailing and flying. The third stage will put your combat skills to test with the new opponent, Maguu Kenki. And finally, players will be asked to clear out nearby monster encampments with the aid of three kinds of Harpastum Bombs. 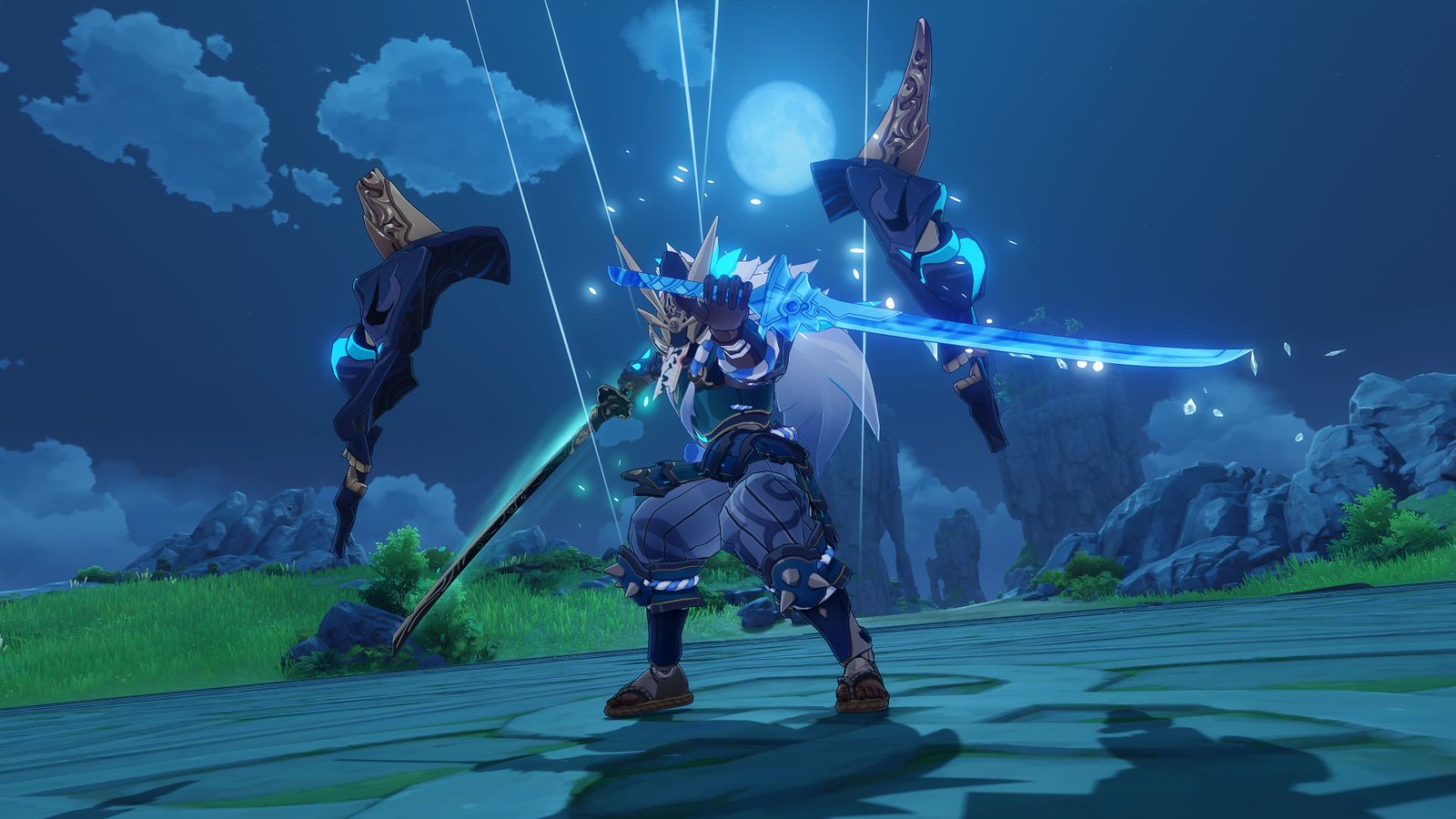 We also want to introduce a bit more about the new monster mentioned earlier, Maguu Kenki. With its unique Inazuma-style aesthetic, Maguu Kenki also has its own attack style. When Maguu Kenki’s health falls below a certain amount, it will summon phantoms and can deal both Anemo and Cryo damage against players. In addition, any ranged attack will be blocked if Maguu Kenki is not engaged in close-range battle, forcing players to confront it face-to-face.

Bountiful rewards also await you in the Event Shop. By completing the main event challenges mentioned earlier, you can obtain two event currencies, Shiny Flotsam and Mini Harpastum, which can be used to exchange for various resources and items, as well as the new four-star catalyst Dodoco Tales up to maximum refinement. 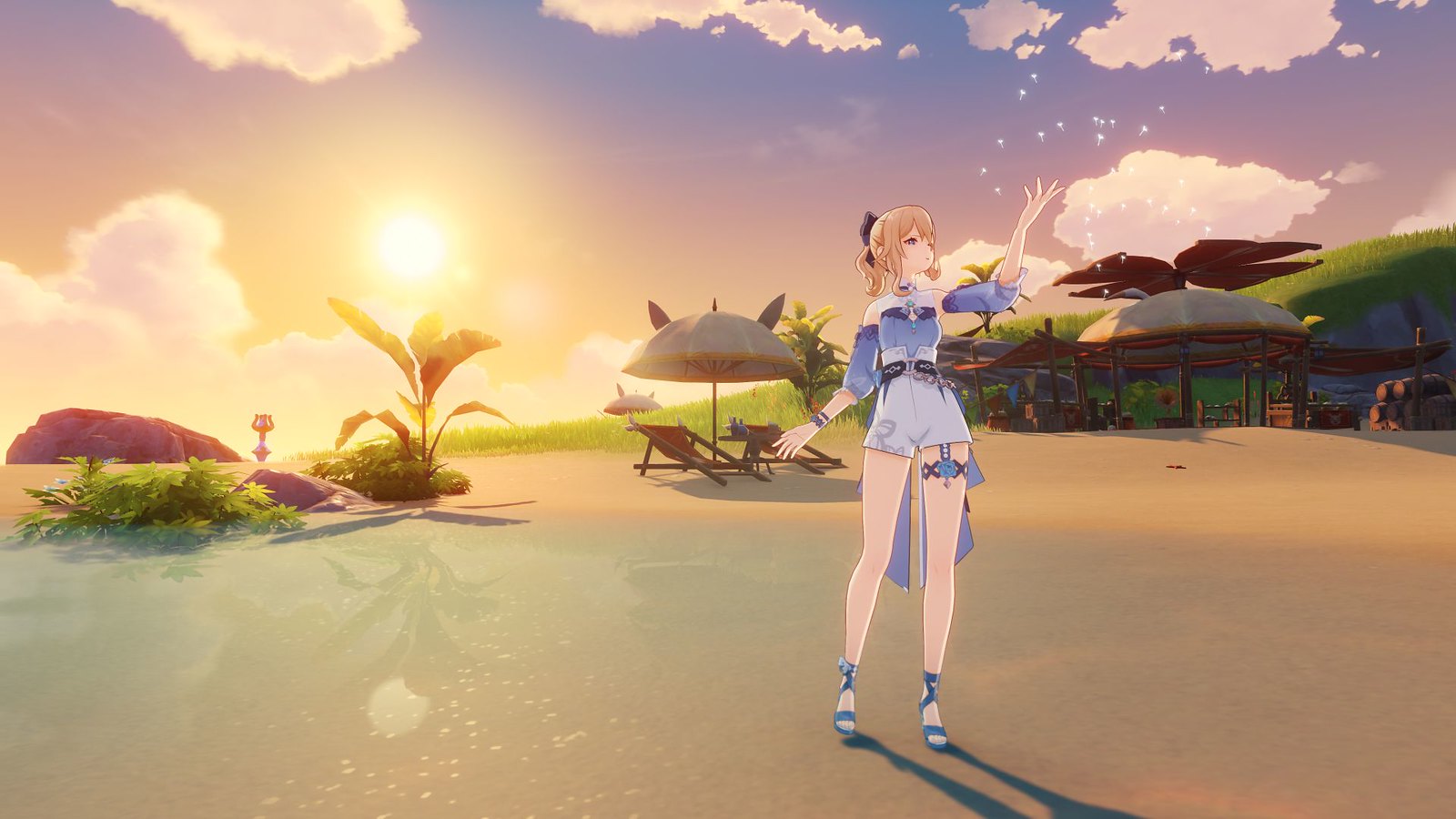 Dress up for the summer

No summer vacation is complete without cool summer clothes. Therefore, we’ve designed summer-themed outfits for Jean and Barbara, providing you the first-ever chance to dress them up with alternate outfits.

Jean’s outfit Sea Breeze Dandelion will be available for purchase in the in-game Shop at a limited-time discount. Barbara’s outfit Summertime Sparkle will be free to claim by participating in the Echoing Tales event. 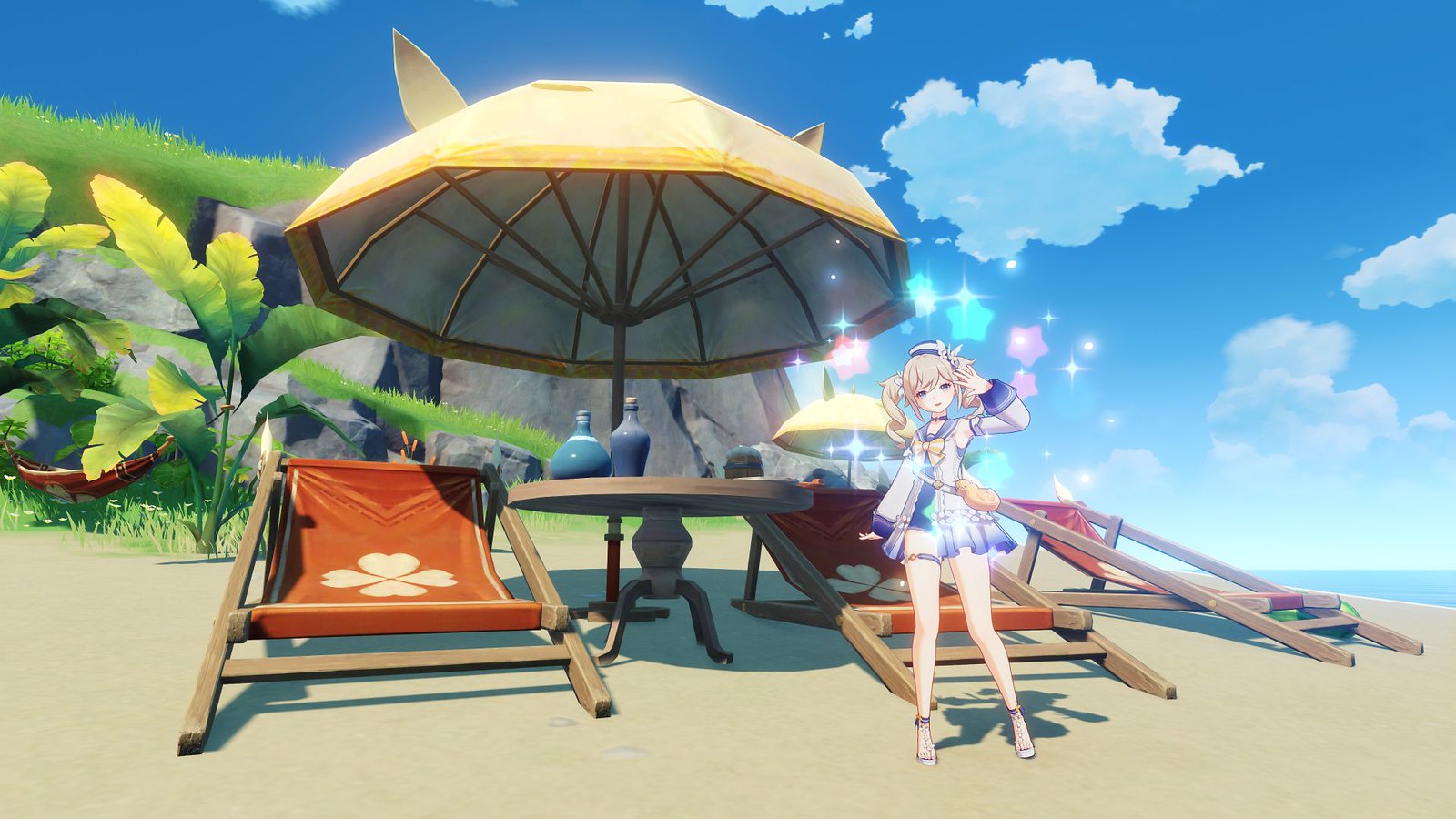 We’ve also prepared other events full of fun games and challenges on the archipelago. So be sure to check out this limited-time new area during Version 1.6. 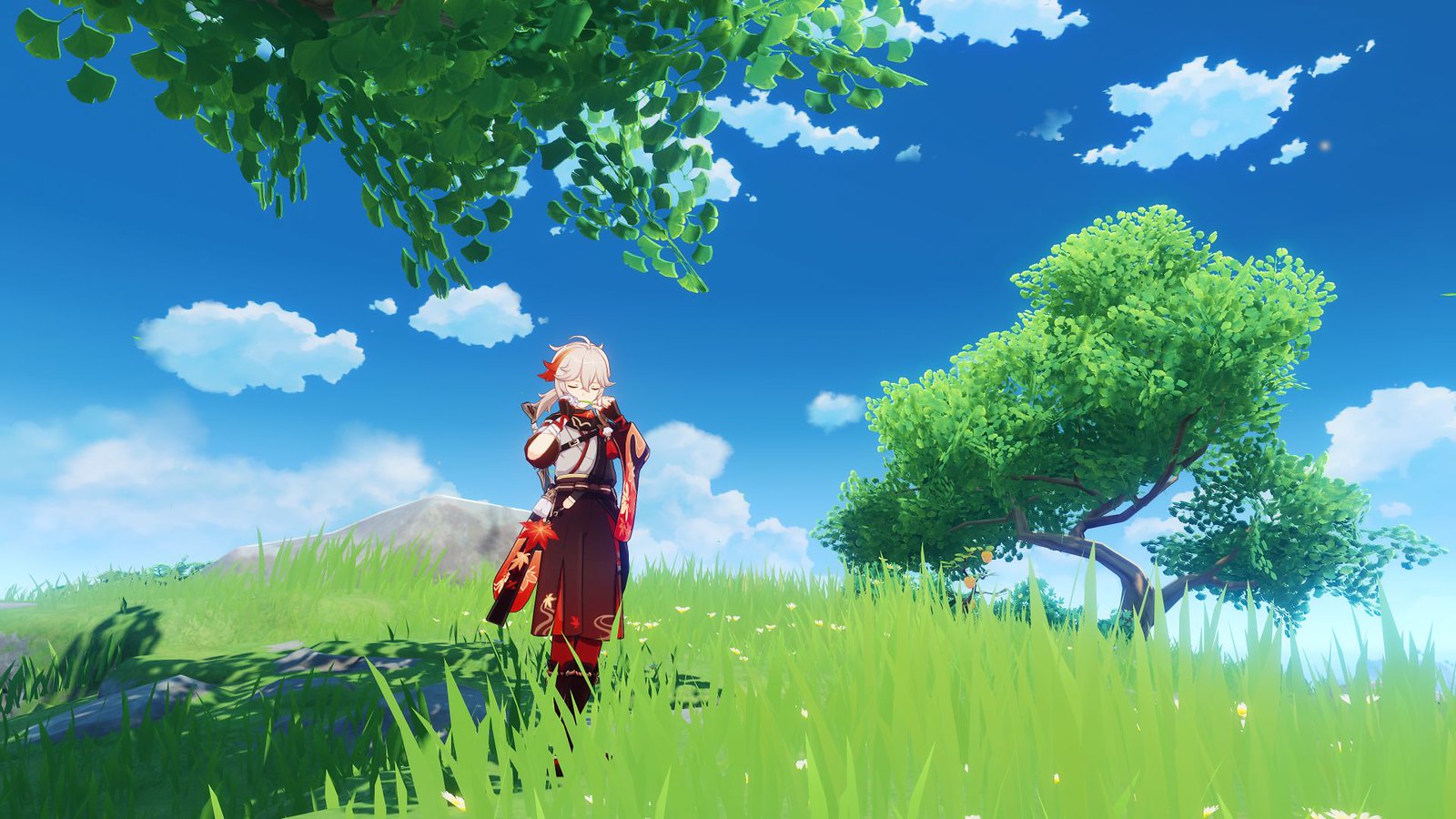 One step closer to Inazuma

Kaedehara Kazuha, the first playable character from Inazuma, will officially join the game during Version 1.6. Wielding an Anemo Vision and a sword, Kazuha not only boasts a versatile combat style, but also provides buffs to his teammates under certain circumstances.

Kazuha’s Elemental Skill Chihayaburu will release a rushing wind current that pulls objects and opponents towards his current position before launching nearby opponents, dealing Anemo damage and lifting Kazuha into the air. When Kazuha is in mid-air from the effects of Chihayaburu, he can unleash a special Plunging Attack, “Midare Ranzan,” dealing Anemo damage and creating a miniature wind tunnel that sucks in surrounding objects and opponents. His Elemental Burst Kazuha Slash will attack the enemies with Anemo AoE damage in a single strike, and leave behind a storm field that deals Anemo AoE damage at set intervals to all opponents within. To make Kazuha even more powerful, both his Elemental Skill and Elemental Burst can deal additional elemental damage if they come into contact with Hydro, Pyro, Cryo, or Electro.

Kazuha also provides additional buffs to the team, making him a great choice for your party and team. Upon triggering a Swirl reaction, Kazuha can grant his teammates an elemental damage bonus for their corresponding element. One of his other Passive Talents can decrease sprinting stamina consumption for your own party members.

In the latest Archon Quest, Kazuha will also provide clues about the way to the closed-off Inazuma. For some reason, this wandering samurai is wanted by the Inazuma Shogunate and now traveling with Beidou’s Crux Fleet. The Crux Clash, a grand martial arts tournament, will be held there. 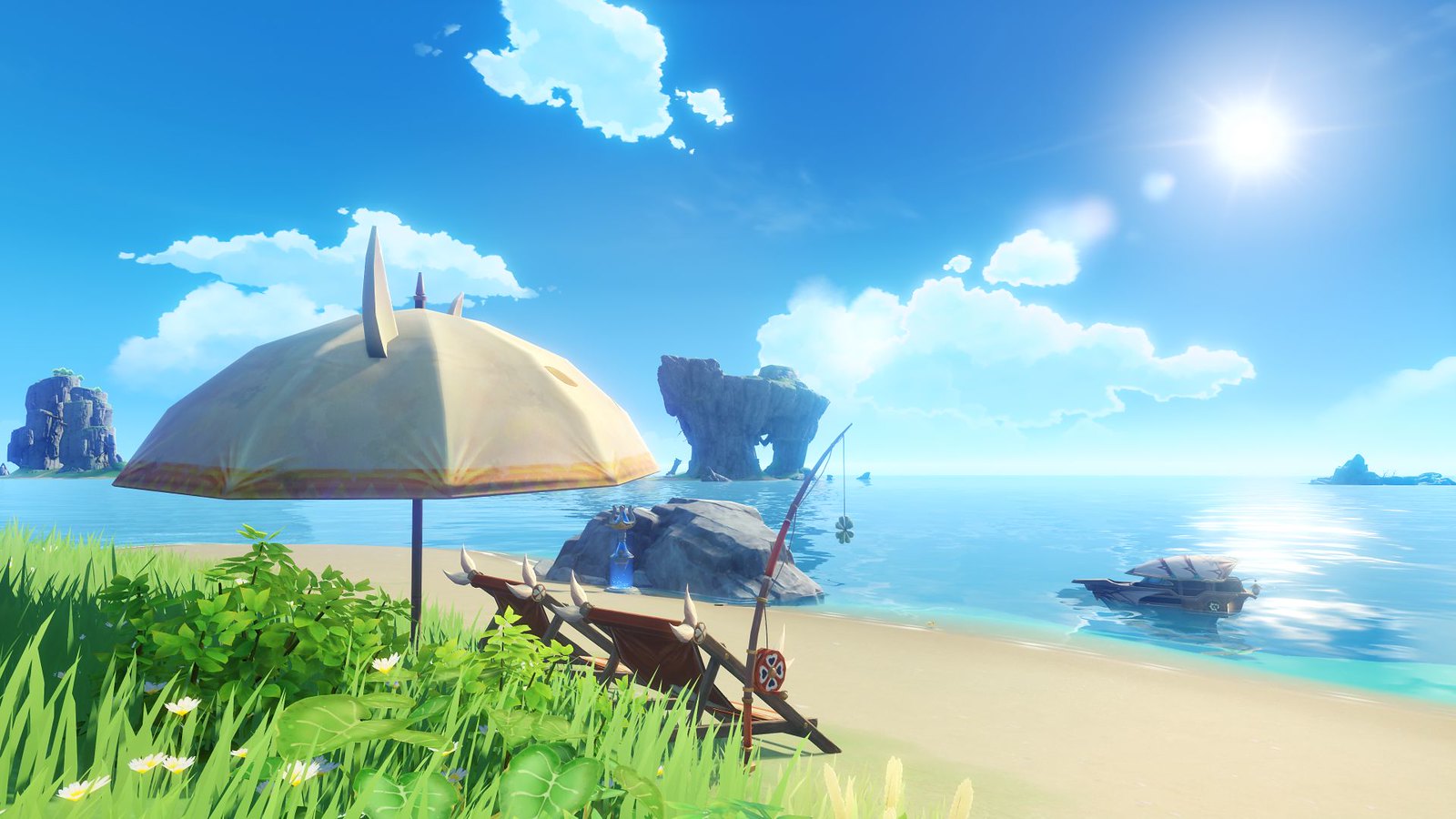 Other improvements and more

As always, in the end we’d like to share some adjustments our team has decided on to improve the current gameplay based on serious considerations and player feedback! Some of you might have already noticed a patch released shortly after Version 1.5 went live. The patch aims to improve performance from several perspectives, including a steady rise in frame rate on PS5 and PS4.

With Version 1.6, if you’re fond of the Serenitea Pot we introduced earlier, you will also be able to invite characters you own to reside in your realm. Characters in your realm will gradually accumulate Character Companionship Experience over time, and this rate of increase will grow faster with a higher Adeptal Energy Rank.

And that’s all we’d like to share ahead of the Version 1.6 release on June 9! We hope you have a wonderful summer on the sea and islands in the world of Teyvat!