Welcome to Knockout City, the dodgebrawl capital of the world

Hey everyone, I’m Josh Harrison, and I’m the Marketing Manager at Velan Studios. We’ve been working on a team-based action game called Knockout City, and we’re beyond excited to have finally revealed it to the world. Knockout City is a game where you’ll team up with friends to take down rival Crews in epic dodgeball battles.

As a dodgebrawlin’ denizen of Knockout City, you’ll make a name for yourself through your skill and style. You’ve learned to flex your abilities, you’ve shown up looking your best, so now it’s time to chuck dodgeballs at your rivals’ faces. This is a multiplayer experience unlike anything you’ve ever played before, so I’m here to take you through what sets Knockout City apart. 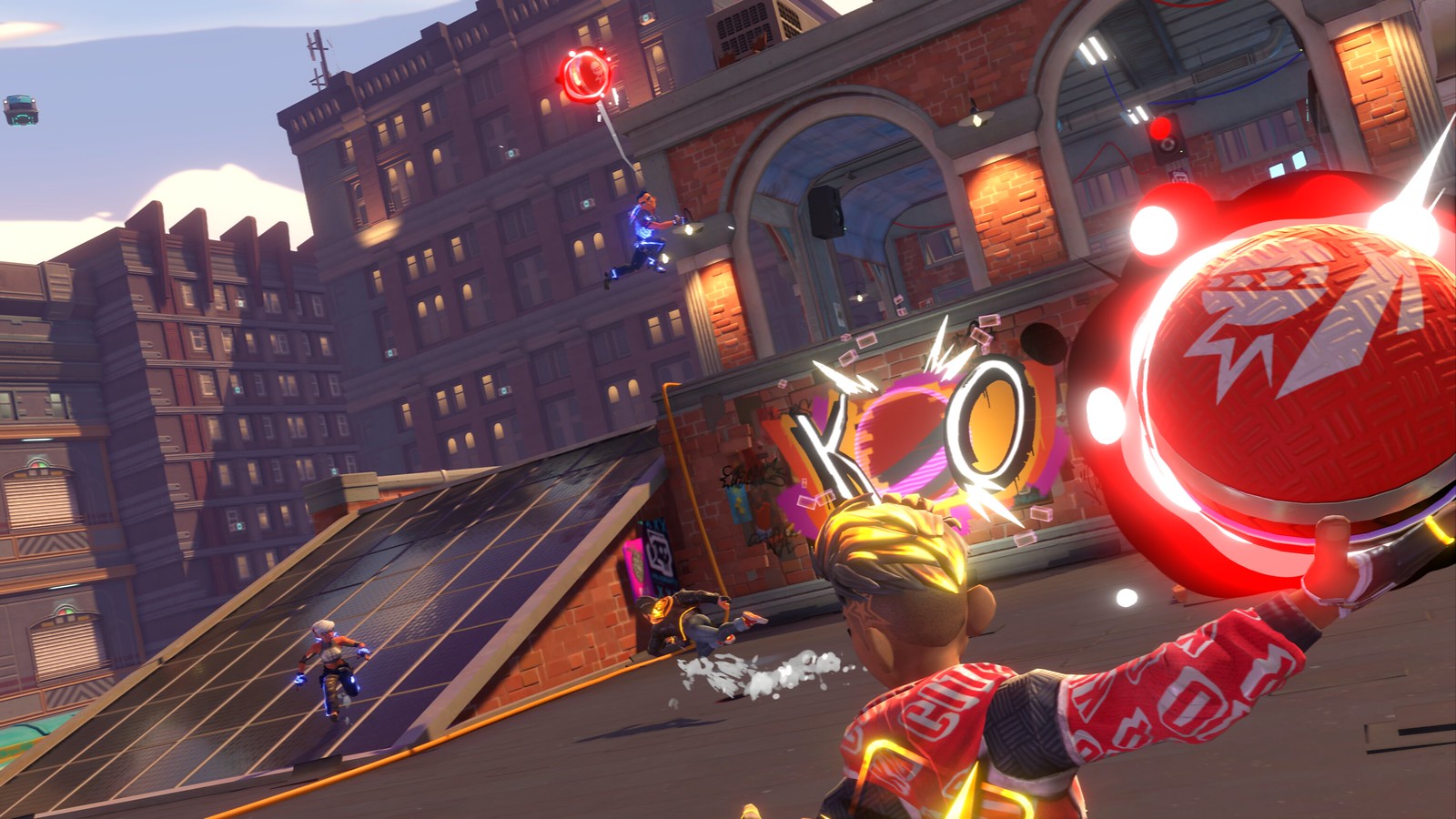 The basics of a brawl come down to throwing and catching, but you’ll need to master positioning, timing, and teamwork if you want to take home a win. Catching a ball with perfect timing powers it up, making it faster when you throw it back at your opponents. Trick shots let you lob a ball over objects or curve them around corners. The dreaded Fake Throw can screw with your rival’s catch timing, giving you a window to knock them out for real.

Dodge out of the way of incoming balls, or tackle opponents to disorient them and make them drop any balls they might be carrying. Don’t let anyone tell you assists don’t matter, either, because a quick pass to your teammates will power up the ball and let you hit an enemy from a better angle. All of these skills combine to give you a recipe for success on streets and rooftops across the city.

Don’t worry about being caught empty-handed—everyone in Knockout City can drop to the ground, Ball Up, and become a weapon for their teammates to use against the other team. Use this ability to move quickly into the fray or get a quick knockout when your rival least expects it. Charge up a teammate in your hands to perform an Ultimate Throw: launch them high into the air so they crash back onto the battlefield in a huge, instant-KO explosion. There’s nothing more satisfying than wiping an entire team off the map in one move.

The only thing better than dominating in Knockout City is looking good while you’re dominating in Knockout City. You’ll have near-endless ways to modify your style, thanks to an included progression system that gives you hundreds of cosmetics and customization options to choose from. Pick your brawler’s appearance, with a range of looks from badass to hilarious. Beyond what you’re wearing, we want you to add attitude and personality to everything from your KO Effect to your Victory and Defeat Poses to your Glider. (Oh, did I mention you can pop out a hang-glider at any time? Because you can.)

Your team will have your back in a specific match, but your Crew has your back forever…  or at least as long as you want to rise to glory together. Up to 32 friends can Crew up, offering a whole new way to customize your looks. You’ll all sport your holographic Crew logo on the back of your jackets and arrive to your fights in your Crew’s stylish hovercar. Each Season, you’ll also have weekly challenges to complete as a Crew, unlocking more options to define your Crew’s unique identity.

Take a stroll through Knockout City, and you’ll find plenty of places worth defending with your Crew, each with unique mechanics to keep your scuffles interesting. High winds in Rooftop Rumble will boost your glider forward. A giant wrecking ball will fling even the toughest brawlers around in Concussion Yard. Knockout Roundabout is the home to endless traffic, perfect for a drive-by KO or rolling underneath for a fast getaway. Back Alley Brawl, our most recently announced map, has a series of tubes that’ll suck you up and spit you out across the map for a speedy escape or a new angle of attack on your opponents. Between these and more locations to be announced in the future, there are plenty of places you’ll be marking your territory.

Beyond the standard dodgeball, you’ll have plenty of Special Balls at your disposal to keep matches feeling fresh and dynamic. The Bomb Ball starts ticking when you pick it up, and after a short time, it (unsurprisingly) explodes. Trap your opponents within the Cage Ball for an opportunity to turn them on their teammates or toss them off the side of the map. If you want some serious air, grab the Moon Ball! You’ll jump higher, like you’re on the surface of the moon, and hitting an enemy with it will practically knock them into outer space! Just announced today, our Sniper Ball will lock on to an enemy far across the map and snap to the target at crazy-fast speeds when thrown. Stay tuned, because we have more to announce here, too.

Our standard game mode is Team KO, a multi-round 3v3 match, but we’ll be introducing over 20 new playlists by the end of the year. Another you’ll be able to try is Face Off, where you and one opponent are pitted against each other in a slowly shrinking battlefield, armed with nothing but your wits and a bunch of dodgeballs. There are plenty more playlist reveals coming soon, including some surprises that can only exist with the unique mechanics of Knockout City.

You can catch Knockout City on PlayStation 4 for $19.99 / €19.00 when it comes out on May 21, with backwards compatibility and enhancements for PlayStation 5 players. We’ll be celebrating our launch by letting everyone on all platforms play free for a limited time. If you’re looking to check it out sooner, we’re hosting an upcoming cross-play beta, and we’d love for you to try it with your friends, no matter how you’re playing. Sign up for beta access* to get an early taste of what dodgebrawl glory feels like.

Knockout City has been in development for four years, and the whole team at Velan Studios is delighted to be sharing it with you soon in partnership with EA Originals. Keep tabs on all things Knockout City by following us on Twitter and Discord.

© 2021 Velan Studio, Inc. EA and the EA logo are trademarks of Electronic Arts Inc. Trademarks are the property of their respective owners.