How Fallen Legion Revenants blends intense battles with a branching story, coming to PS4 on February 16

The Fallen Legion Revenants team shares their thoughts on creating a unique JRPG.

Heya I’m Spencer Yip, the director and programmer on Fallen Legion Revenants. We’ve been developing a JRPG with heart-pounding tactical battles and a story where your choices count. It’s coming to PlayStation 4 on February 16 in North America and February 19 in Europe. We have a demo on PlayStation Store that contains the complete first chapter, and your save data from the demo can be imported into the full game.

Fallen Legion Revenants takes place in a world covered in miasma where a floating castle is mankind’s last refuge from mutated beasts lurking below. Lucien, a magnetic politician protected in the castle walls, discovers an ancient book where he learns of the Exemplars, weapons that can turn into sentient soldiers. He joins forces with Rowena, a revenant determined to find a way to come back to life to raise her living son. The two reluctantly make a pact to overthrow Ivor, the mad tyrant controlling Welkin.

How did you write the story?

Geoffrey Golden, Narrative Director: Early on, we knew Rowena would be a ghost warrior and Lucien was a social manipulator. Those elements were crucial to the core game loop. Since their mechanics were so different (combat vs. social), I liked the idea of Rowena and Lucien having opposing personalities. Rowena is tough, honest, and plain-spoken. Lucien is charming, duplicitous, and witty. They’re forced to work together, so their scenes had plenty of interpersonal conflict, and that’s fun to write. Let those sparks fly!

Since the first Fallen Legion was about making tough moral choices, Spencer and I wanted to push that idea further. To make the obstacles the characters face gut wrenching for them – and hopefully, the player! The story tests what Rowena and Lucien are willing to do for the greater good, and for the people they care about most.

How did you come up with the designs for Rowena and Lucien?

Leon Marcello Sutanudjaja, Art Director: Rowena’s spirit lingers because she wants to save her son so we picked blue as her color theme to represent a mix of sadness and sincerity. In battle, Rowena casts spells with a magic staff she uses to channel her energy. The staff has a curved metal design to show how fate spirals and the many paths she can end up in.

In contrast with Rowena’s cool temperament, Lucien has a warmer color palette to match his charismatic, but secretive nature. We emphasized this in his signature thinking pose where he smiles while his hand is under his chin. Later on, we gave Lucien long hair to make his movements and animations livelier. You play as both Lucien and Rowena, so we wanted to highlight these personality differences in their artwork.

How does Rowena fight monsters?

Spencer: Rowena commands a team of three Exemplars and each button controls a different character. You can slash a monster with Zulfiqar by pressing square and combo right into a blunderbuss blast with Jacquine by pressing circle. Striking enemies fills up Rowena’s mana which lets you cast spells using the triangle button or unleash deathblows by holding R and pressing one of the Exemplar buttons.

Enemies don’t wait for their turn to retaliate in Fallen Legion Revenants. You can hold down the L button to block or if you block right before an enemy strikes you can parry their attack. A well-timed parry sets Rowena’s team up for a counterattack and can even reflect projectiles back at foes.

You can also move Rowena on the grid to dodge attacks, escape debuffs, or walk over to a healing buff. Some deathblows like Zulfiqar’s Rushing Sentry can knock enemies backwards into a different tile and the strongest attacks only target specific tiles. A good way to inflict heavy damage is to use one character to push or pull an enemy into a tile where you can hit it with a powerful deathblow.

What does Lucien do while Rowena is battling specters and venomous pigs?

Dedee Anderson Ganda, Producer: Lucien uses his wits to wheel and deal with politicians in Welkin. We designed Lucien’s scenes so there are multiple ways you can play them. If Lucien wants to pass a bill, you could ask his allies to support his proposal or blackmail rivals to force them to join your side. Since Rowena and Lucien’s storylines happen at the same time, Lucien also helps Rowena by mixing potions or gathering information.

Sometimes, Lucien needs to sneak past patrolling guards to gather what he needs. Guard behaviors are a key element in our stealth design. Some guards only move in one direction while others quickly turn around to catch Lucien. I tried to hide secrets when designing levels so keep an eye out for sparkling items on the ground and hapless guards holding treasure chests. 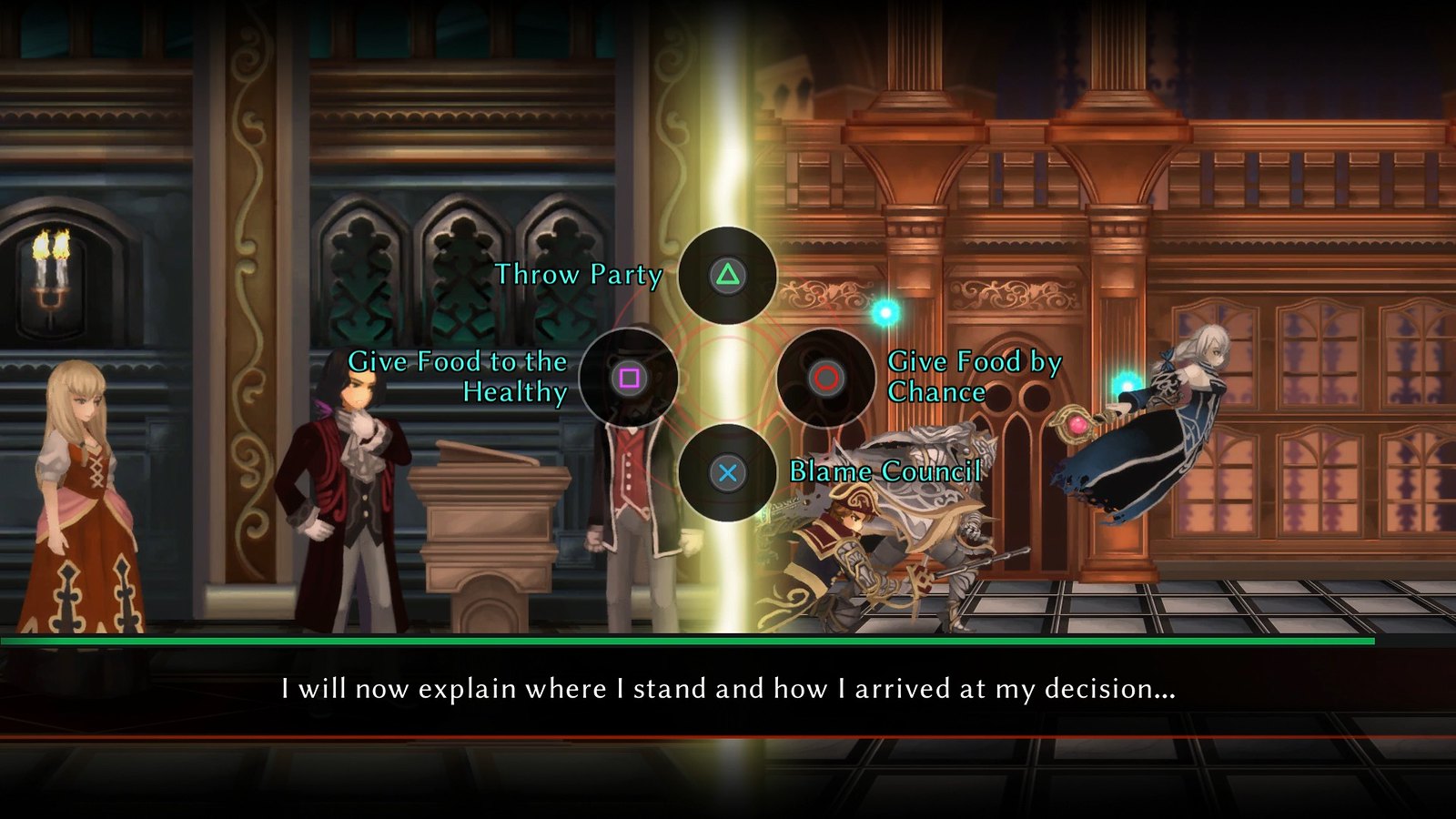 What do my choices do in the game?

Spencer: Choices are a huge part of Fallen Legion Revenants. The way Lucien talks to people in Welkin changes his relationships with everyone around him. The friends or enemies you make alter what Lucien can do in the future. Rowena also makes decisions and the choices both characters make affect the story.

The first Fallen Legion had many story routes, but only one ending. We made sure to change that for Fallen Legion Revenants. Without spoiling anything, I’ll say there are *a lot* of endings to discover. We spent one voiceover session with Erika Harlacher (the voice of Rowena) and Joe Zieja (the voice of Lucien) just recording ending lines.

If you talk with the Oracle, you can use the Scry option to go back to an earlier chapter and make different decisions. Scry is kind of like “New Chapter+” you get to keep all of the Exemplars, weapons, and battle items you found when you replay a chapter.

The Fallen Legion series started right here when it was announced on the PlayStation Blog. We wanted to show our appreciation for the PlayStation community and drew this just for you. We hope you enjoy our game as much as we enjoyed making it! 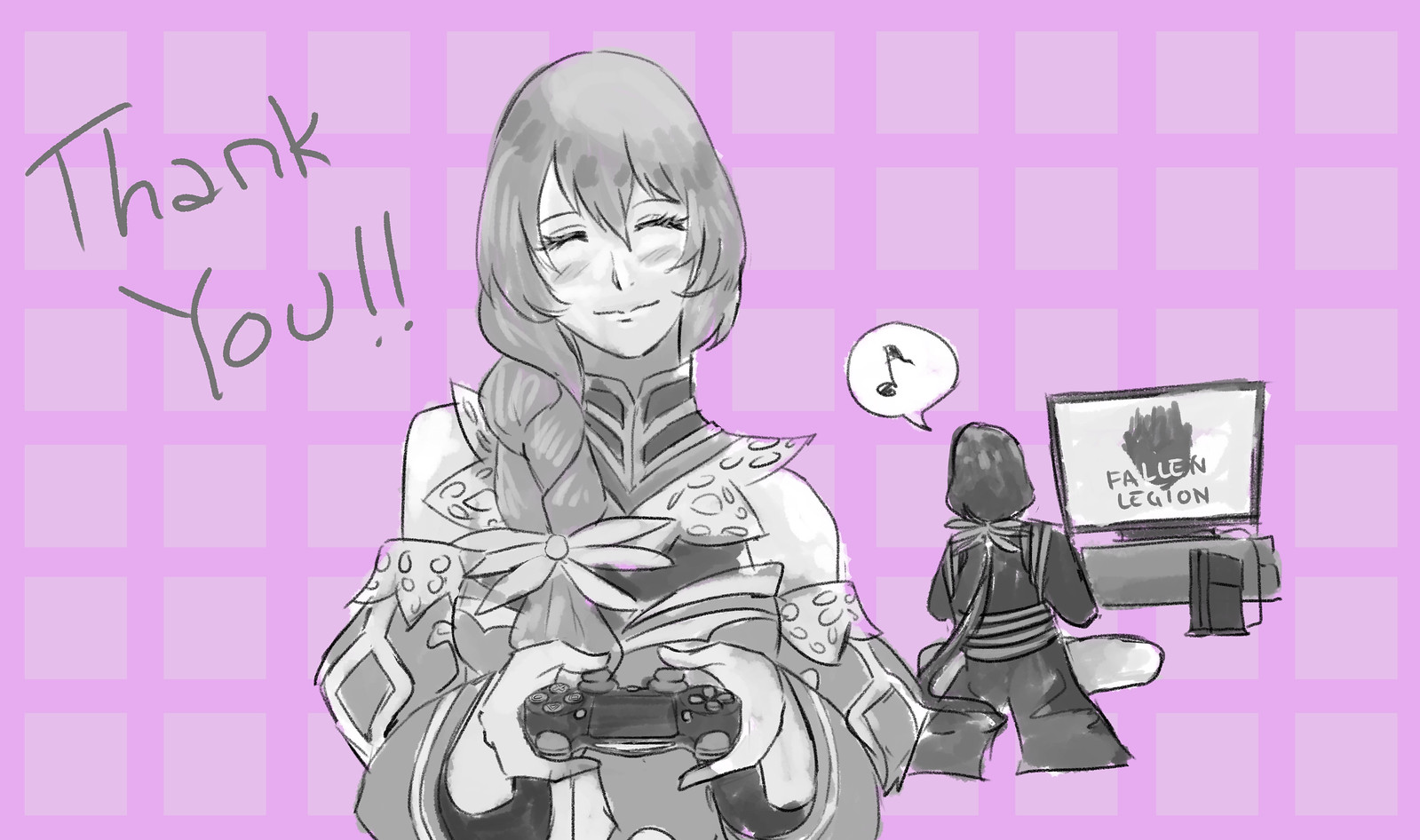