The urban RPG arrives with new quests, full voice-acting, and an extra area.

Hello, PlayStation people! This is ZA/UM here to tell you that our award-winning urban RPG Disco Elysium is coming to PlayStation 4 and PlayStation 5 in March 2021. We’re very excited for you all to check it out.

We’ve called the version you’ll be playing Disco Elysium – The Final Cut as we’ve been busy wrapping up everything we wanted to do with the game since releasing it for PC in 2019, and putting a pretty little bow on it.

We’ve added over 150,000 words with new quests that let you explore your character’s political dreams — you’ll set out to rebuild your party, get filthy rich, or attempt to turn back time. Expect to see some truly monumental sights along the way, meet new characters, and explore a whole new area. If you’re playing on PlayStation 5, you’ll be able to experience Disco Elysium – The Final Cut in 4K resolution and at 60 frames per second. 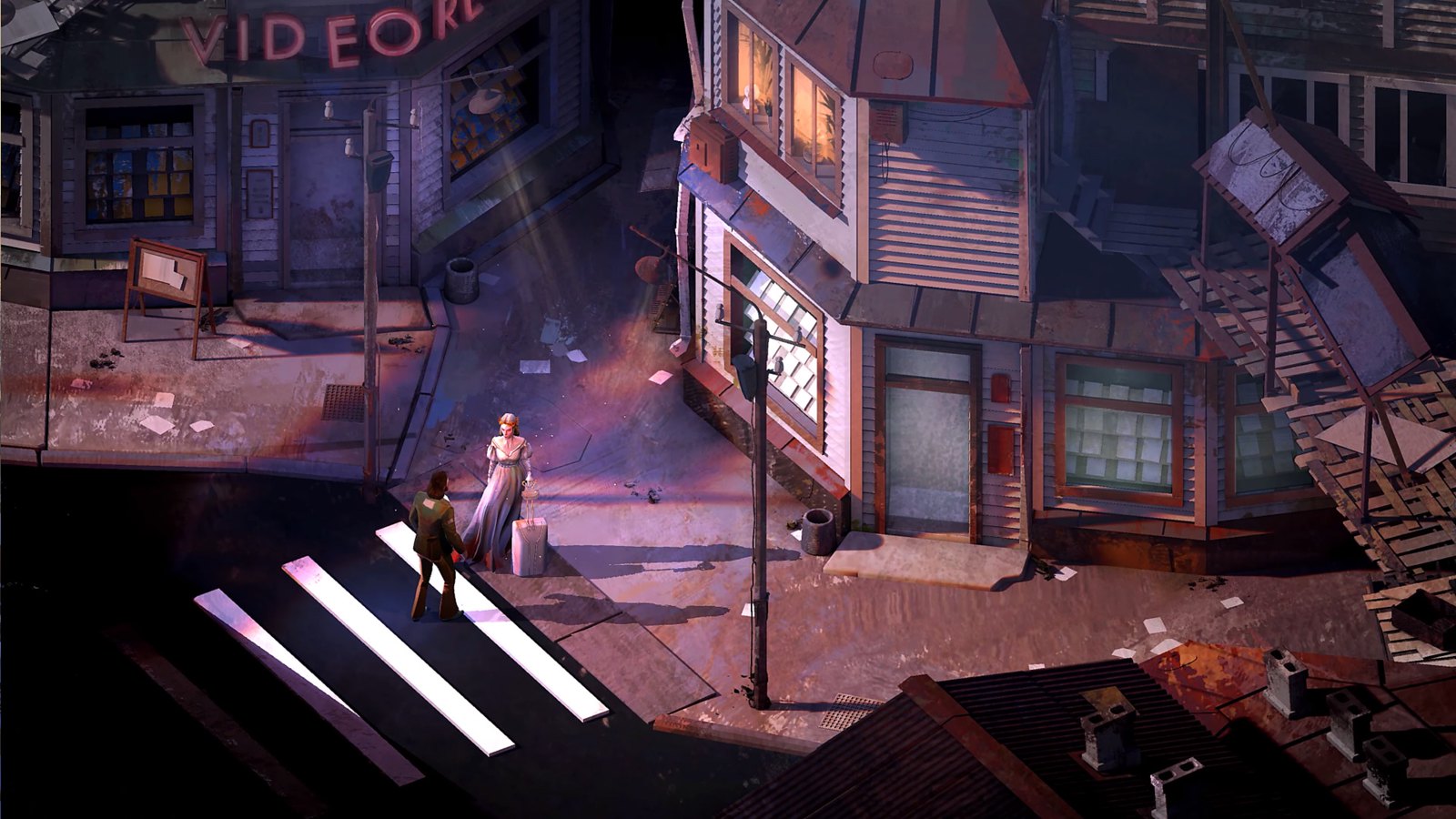 We’re also thrilled to announce that after hundreds of hours in the recording studio, Disco Elysium now has full voice-acting for every character, so you can have the entire game read out loud to you. The number of supported languages has also been increased to include French, German, Russian, Spanish, Brazilian-Portuguese, and Korean so more people around the world can enjoy it.

Disco Elysium is about a detective who wakes up in a rundown coastal district with a banging headache and only a few dregs of memory left. You set out to discover what happened to him inside the unique world we have created. We’ve thrown together disco music, early motor carriages, and post-revolutionary angst for our setting, and brought it all to life with actual oil paintings.

You have the kind of freedom to explore it all that’s only really experienced when playing tabletop role-playing games, like Dungeons & Dragons. In fact, Disco Elysium started out life as a tabletop game with rulebooks and dice rolls. This is why big moments in the game are decided by the roll of dice and why we’ve ensured that failing these rolls is just as fun as succeeding. 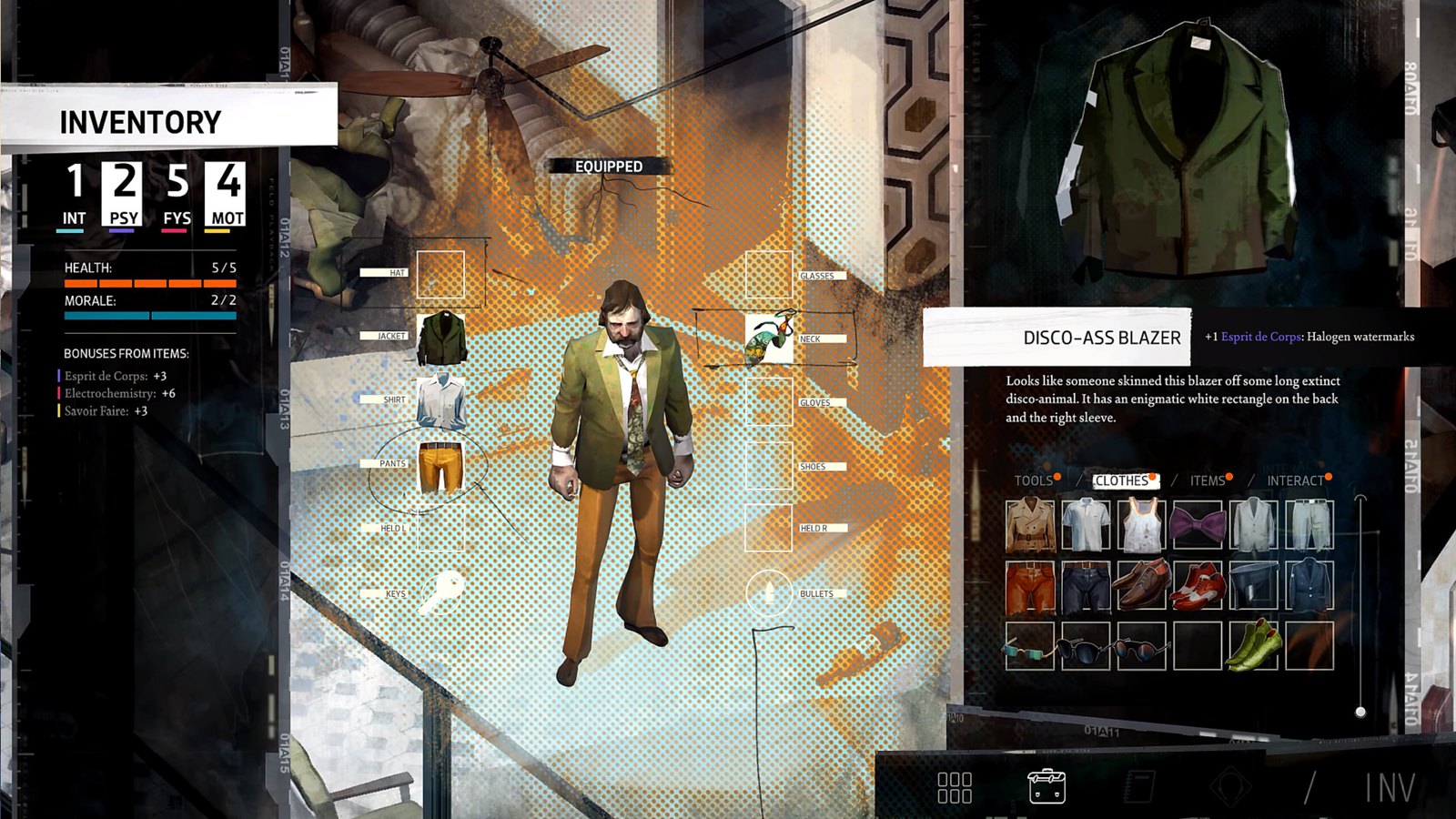 Adapting from the tabletop experience has enabled us to engineer a story with an absurd number of possible outcomes. We have written over a million words to accommodate the many, many ways you can approach and tackle each situation — whether it’s solving a murder, singing karaoke, hustling a billionaire, or solving the meaning of life.

But you won’t be alone as you tackle the problems that our world presents. Unlike other RPGs, the 24 skills in Disco Elysium have distinct personalities that talk to you from inside our main character’s head. They come in four overarching categories: Intellect, Psyche, Physique, and Motorics. You can level these skills up to increase your proficiency in them and unlock new solutions.

Put points in Hand/Eye Coordination and you’ll be able to catch a coin flicked through the air at you and look cool doing it. Or really pump up your Physical Instrument skill and you may be able to strong arm your way past a man built like a bulldozer who’s blocking your path. Likewise, if you don’t have a high Perception skill you could miss out on details in the surroundings that may help with your investigation. 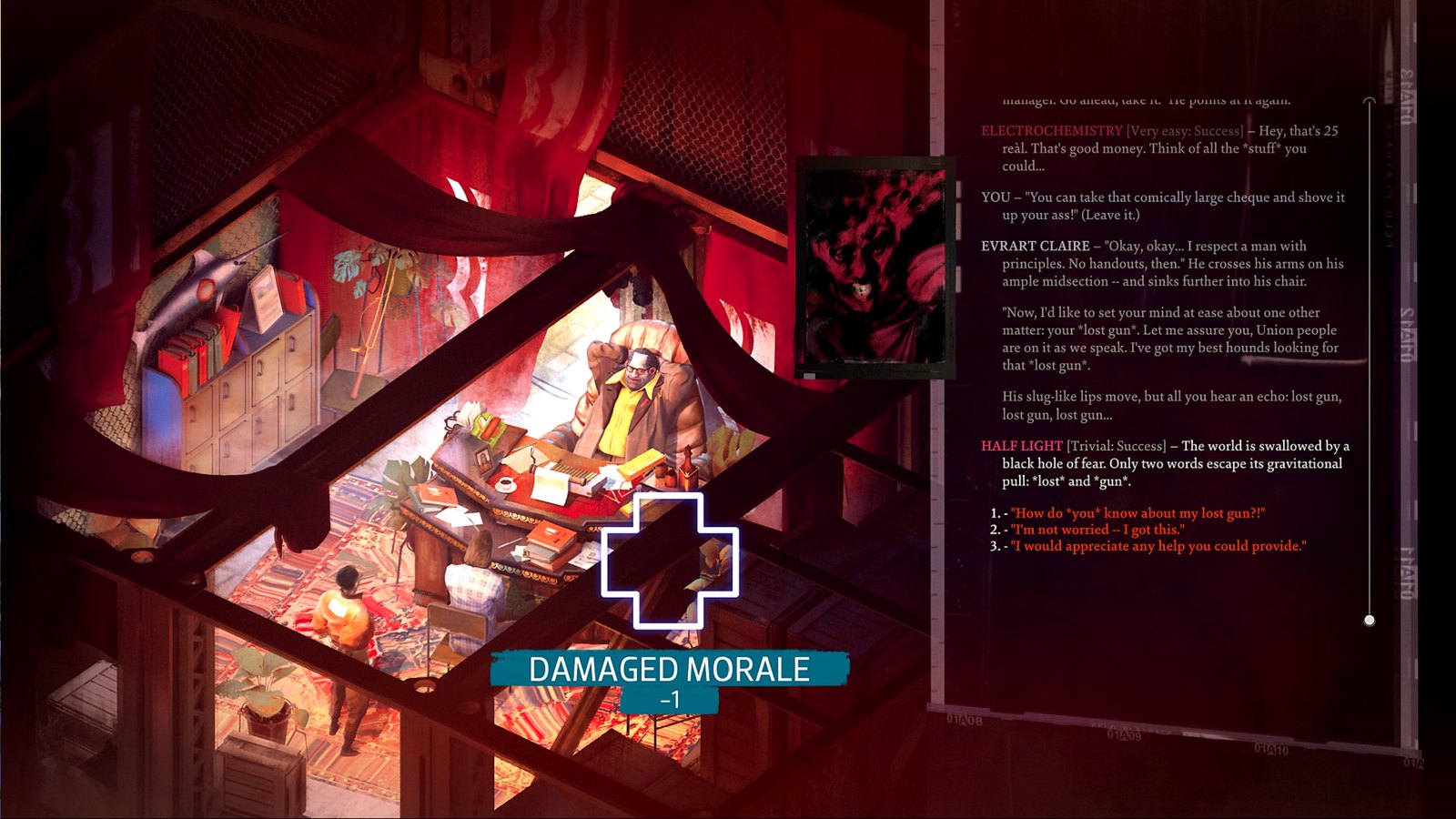 Then there’s the Thought Cabinet. As you interrogate, sweet-talk, or gossip with the citizens of our city block you’ll happen across new thoughts. These are put into your Thought Cabinet, which is an inventory for thoughts, where you can cook them over time to become part of your identity. Doing this gives you more dialogue options that may help you progress, or potentially get you further into trouble.

That covers most of the basics of Disco Elysium – The Final Cut. The rest of it you’ll have to discover yourself. Which just leaves us to thank everyone for the support and to wish you good luck as you set out to become a hero or an absolute disaster of a human being.