A flash of steel, a few quick slashes and the enemy is dead; this is the fantasy of how a Samurai fights. Lethal, precise, fast… but how does that translate into gameplay? Honoring this fantasy, what we called the “Lethality Contract,” was a major challenge we had in making Ghost of Tsushima.

Keeping things lethal was a struggle. Assassinations and Standoffs nailed it, but what about standard combat? Lethality had to hold up across the entirety of the game. That meant it had to work for:

The number of moving pieces we had to pin down to make all of this work (and still be fun) was staggering. Welcome to my job! I am excited to go into the details of how we attacked these problems.

So buckle up and break out your katana, we are going back in time.

As players explored Tsushima and upgraded their weapons and skills, the challenge from enemies needed to grow in tandem. Upgrading weapons increases the player’s damage, so we also adjusted enemy HP and damage to match. This was to increase difficulty and show meaningful growth of the upgrades. All good ideas… but we found out the hard way there was a fine line between showing power growth and breaking the “Lethality Contract.”

When we did our early playtests we received very negative feedback that enemies felt like “sword sponges.” My favorite quote from players was “I felt like I was hitting enemies with a foam bat.” This was… not what we wanted to hear. Players told us loud and clear that their expectation for the katana was the “Lethality Contract,” and that without it the realism that we strove for was shattered. Undeterred (at least at first) we tried many different versions of “hit points” in a different wrapper like “armor points,” but they ultimately failed.

We were banging our heads against a brick wall, and it was painfully obvious that we had to change our approach. As a result, we enforced a hard maximum “hits to kill” across all enemies in the game, even with upgrading weapons. This includes a massive excel sheet of all upgrades and armor against all enemies in the game, and I won’t bore you with the large sheet of numbers (though some of you may enjoy it).

This helped us be careful and avoid having enemy HP too high but still have upgrades feel meaningful. However, we still needed to justify any HP increases to show this power growth by investing in character art. This also allowed us to visually represent a wider range of enemy types:

However, issues didn’t end there. As we implemented more new types of enemies, with smaller enemy HP values, the experience felt flat because they died so fast. We had to increase difficulty across other aspects without breaking our “Lethality Contract” with the player.

Honoring the “Lethality Contract” became so core to the combat experience and hard to retain that we decided early that playing on Easy, Medium, Hard, or Lethal, would not further increase enemy HP to add difficulty. In some ways this made other decisions easier by having a fixed point to work from, but it also meant we had to leverage other elements to increase difficulty, starting with the enemy trying to protect their low HP pool.

Blocking and parrying the player was the primary way to protect HP but our first prototypes were a bit overkill.

Having the enemy parrying your attacks had merit, but was way too frequent. Enemies felt impenetrable, and were not any fun to fight. Combat became overly reactionary, just wait for a parry and strike… which again was not what we wanted. We wanted players to have opportunities to be offensive, and not always be passive as the most effective strategy. To achieve this, we added Stagger damage to heavy attacks to break through defenses, allowing the player to be aggressive.

As a result, the speed in which you could stagger an enemy became a key component of standard encounters. The time it took to stagger an enemy was the time other enemies could strike, and was a core aspect of how we injected enemy variety. This was especially true when adding high cadence attackers (like dual-wielding swordsmen) which gave a more challenging experience. We also varied other enemy attack patterns, time to stagger per enemy type and how defensive they could be to further change the combat experience.

We tried many ideas for new enemy attack patterns and defensive behavior. While not all successful, they are great to look back on.

We added Stances right afterwards, as a way to give more opportunities for players to express themselves, and another method of being more offensive in combat. It didn’t take us long to realize our 4 core enemy archetypes directly mapped to the four Stances we were building. We changed Stance attacks to Stagger enemies twice as fast, which helped incentivize correct Stance usage. This was a double win: it fit cleanly into the fantasy of being a Samurai, flowing between each Stance and staggering / killing enemies fast only reinforced the “Lethality Contract” we were trying to achieve.

We knew that having 1v1 Duels had to be in the game. Having two Samurai face off in an epic fashion was a requirement. We started working on Duels after we had firmly established the idea of the “Lethality Contract.” So we kept the HP pools low. Not only did that feel wrong but was hilariously over too fast.

Though the Samurai cinema trope is two swordsmen facing off and the first strike kills, we knew players would have different expectations. These were boss fights with high challenge and intensity. We had to bend the contract and honor this moment.

We increased the HP, speed / damage of attacks, variety of moves, and added evasive actions. Players enjoyed it but during testing some felt they dragged on too long, but when we lowered their HP they said it was too short. We hit success when we split the Duel up into “phases,” via the sword clash, where each chunk of the fight had an appropriate amount of HP but still kept the fight the length we wanted. 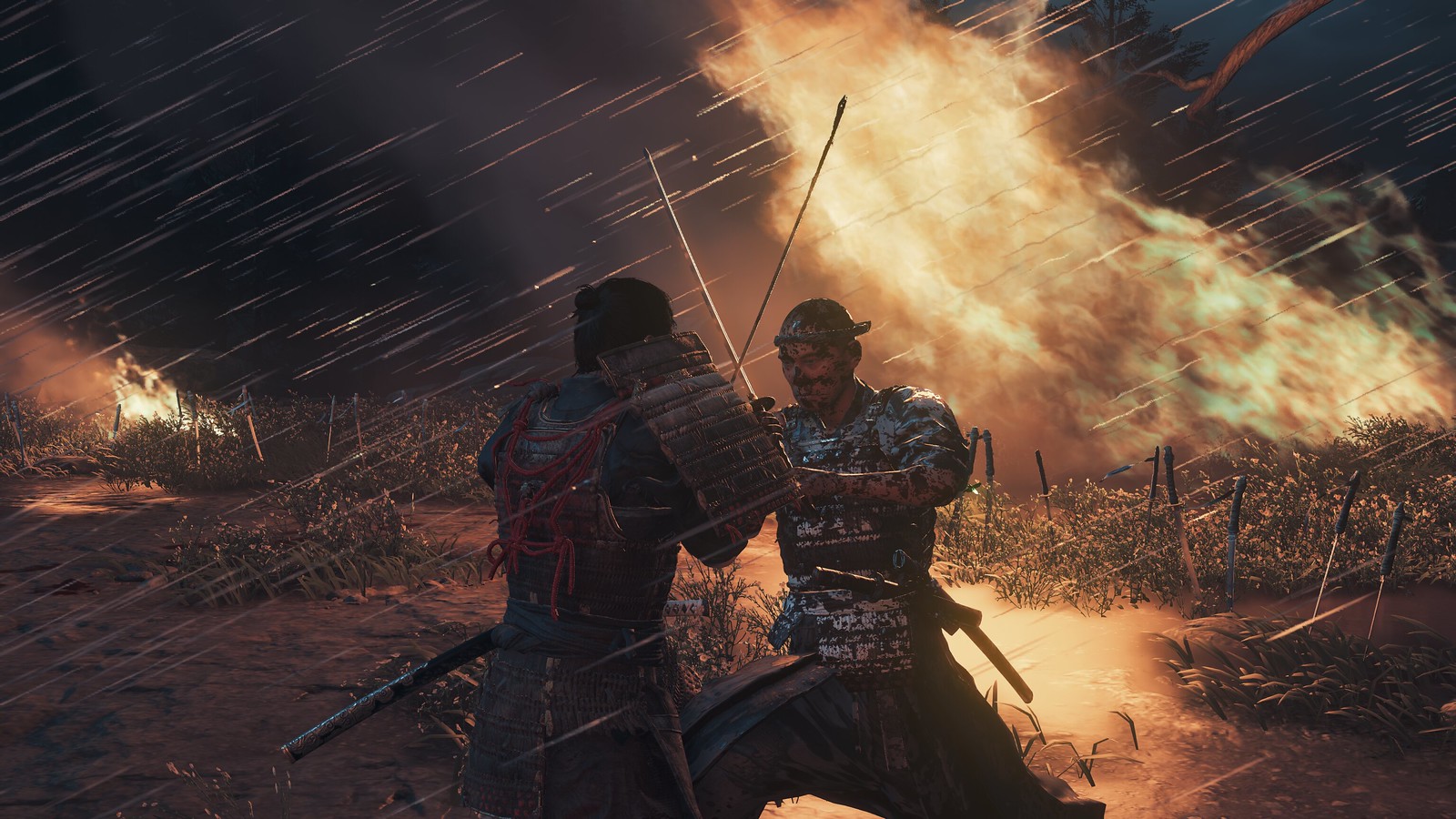 Like Duels, Ghost of Tsushima: Legends required us to change the maximum “hits to kill”. This was especially true with Oni, which are considered mini-bosses and are mythical enemies. So like Duels we increased HP to match those expectations. Additionally, since Ghost of Tsushima: Legends can have 2-4 players attacking a single target with a huge range of abilities (many ignoring defensive behavior), and we needed to support gear Ki scaling, it was necessary to increase HP pools.

Tying it all together: Player Skill, Progression and becoming “The Ghost”

So far I have mentioned a small subset of what went into retaining the “Lethality Contract” but there were many more aspects that supported this concept while increasing difficulty. Here are all of them including what I have discussed so far:

All these items were also key in supporting many different types of players and more axes for Player growth. We wanted skilled Players to gain mastery with Combat, which was created by tightening all the above aspects (like Parrying timing), while upgrades (plus Armor and Charms) would relax these limits and show that sense of growth. This coupled with different difficulty levels allowed a wider range of Players to enjoy Ghost, with multiple ways to achieve victory.

In Lethal difficulty, we pushed all those to the extreme, but interestingly, to honor the “Lethality Contract” we had to increase the damage from the Player. Not only did it feel more fair, but battles could be over in a second, whether it be victory or your own demise, which we felt was right on target. 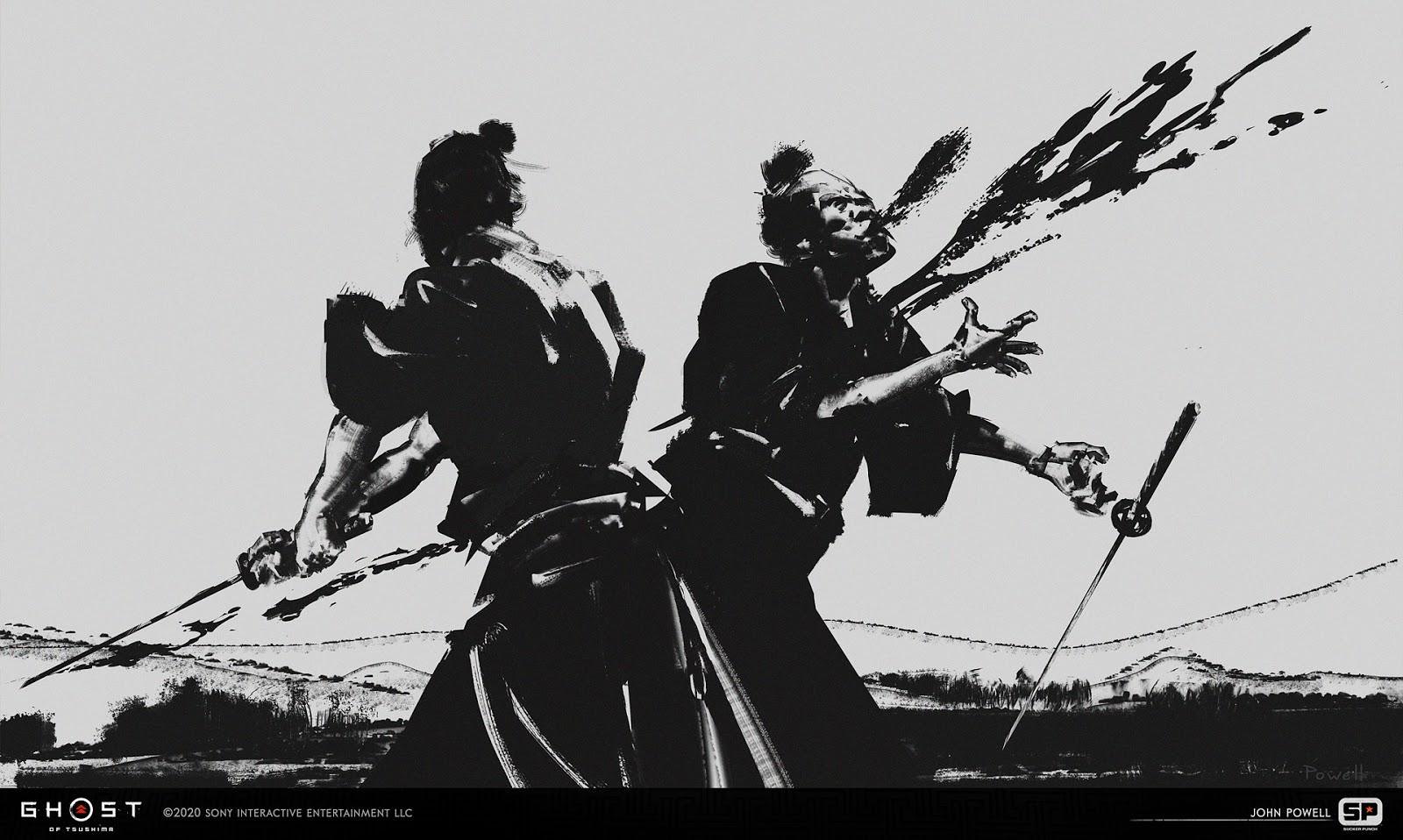 While we wanted to have power growth, we didn’t fully expect how wide players played before moving on to harder tales. We initially predicted a more narrow playthrough of content based on how we saw Players engage with the game while playtesting, but in real world conditions it was very different. As a result many Players “overpowered” themselves before meeting more challenging tales. While not ideal, we preferred this to the alternative of Players feeling ineffective and breaking the “Lethality Contract”.

Additionally we wanted to empower the Player to go on the same journey as Jin to become “The Ghost”. Assassinations, Kunai, Smoke Bombs etc had to be exceedingly lethal to reinforce not only was it more effective than being a Samurai but to have a reason to use them. Feeling “overpowered” with these weapons was acceptable and it fit better into the story we were trying to tell. Though I will freely admit, those Kunai are a little bit too easy to get from bodies ;)

Whew! This was just a tip of the iceberg for how we tackled the “Lethality Contract”, one of the pillars of the Combat balance of Ghost of Tsushima. I would love to keep going, but this has to end at some point! I hope next time you switch your Stance and destroy that Spearman, you can understand a little bit of what went into making you feel like a Samurai.