Warframe comes to PS5: How Digital Extremes is evolving their hit looter shooter

When we first launched Warframe on PlayStation 4 in 2013, we had no idea what journey lay ahead for us being an online, free-to-play cooperative game on console. It was both scary as well as exciting.  We certainly didn’t predict your incredible passion that has powered our studio across an entire console generation, and astonishingly, we now start another with the PlayStation 5.

Free-to-play gaming has not always been the established formula we know and appreciate today. We knew it was a model that would allow us to support Warframe for as long as we could, but never did we imagine that we’d be here, alongside 18 million PlayStation Tenno as we get ready for the next generation of Warframe.

THE NEXT EVOLUTION OF WARFRAME

With next-gen hardware and software possibilities, we aim to yet again work alongside our player community to constantly evolve and improve the experience to bring you the best in Warframe gameplay yet. 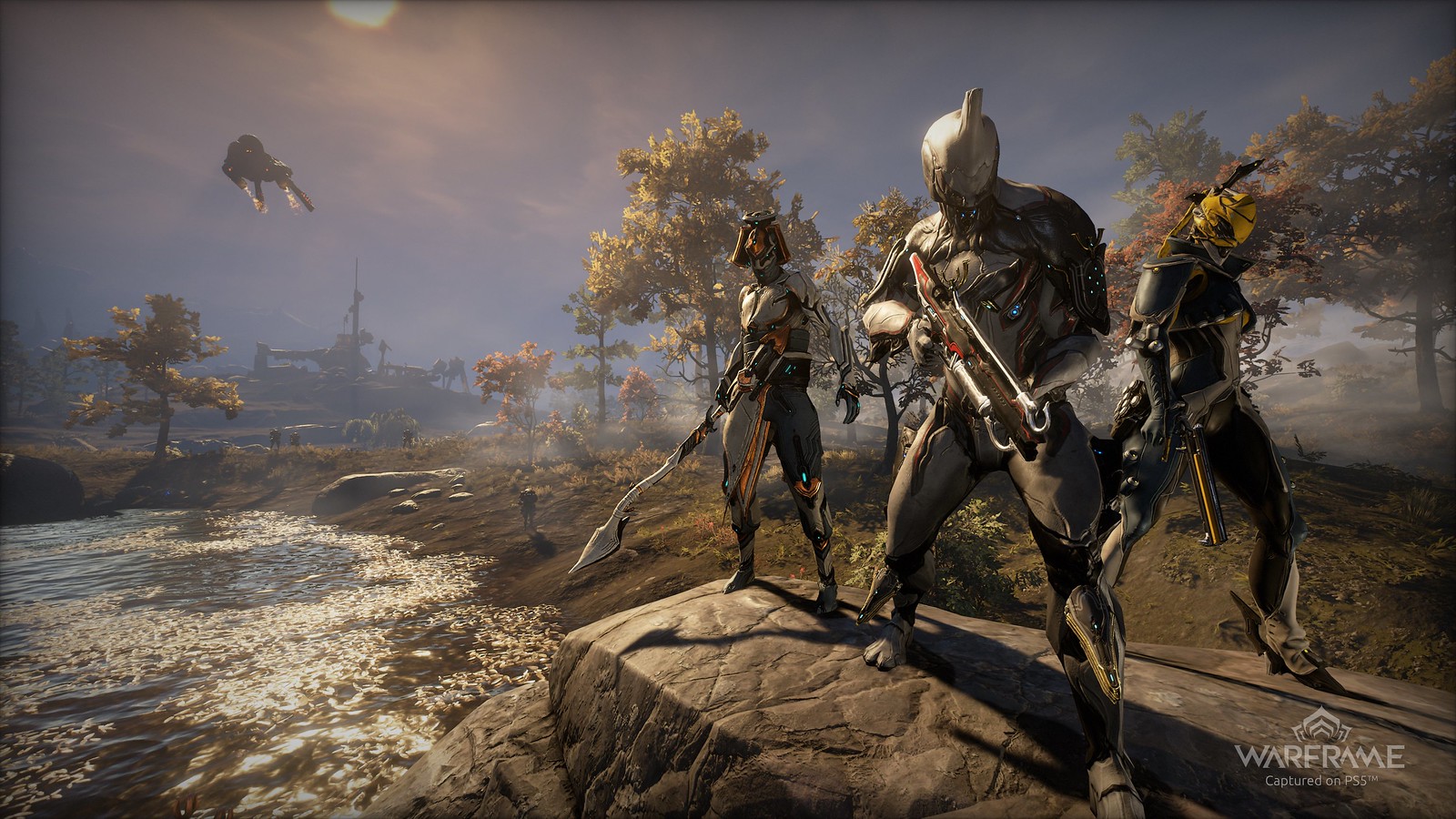 Head to Plains of Eidolon, one of three open world spaces, to experience PS5 Warframe at its most spectacular.

With PlayStation 5, we get to harness improved hardware architecture and feature suites that upgrade players’ experiences all at once, which is a pretty exciting thing for us. We don’t just get to run our tech better, we get the chance to advance it. That means bringing you tech upgrades like dynamic lighting, enabling you to play with friends across generations with cross-save and cross-play, and so much more!

We’ve had next-gen consoles in our sights both as gaming fans and as a developer for a while, and our new rendering system was designed to take full advantage of the technology — not just as an upgrade, but as a base that we can continue to build on and expand over time.

Taking full advantage of the power of the PlayStation 5 console, we’ve upped the ante on dynamic lighting. Seeing the technology improve so much over the years, we knew that it was paramount in taking Warframe and the entire looter shooter genre to the next level. 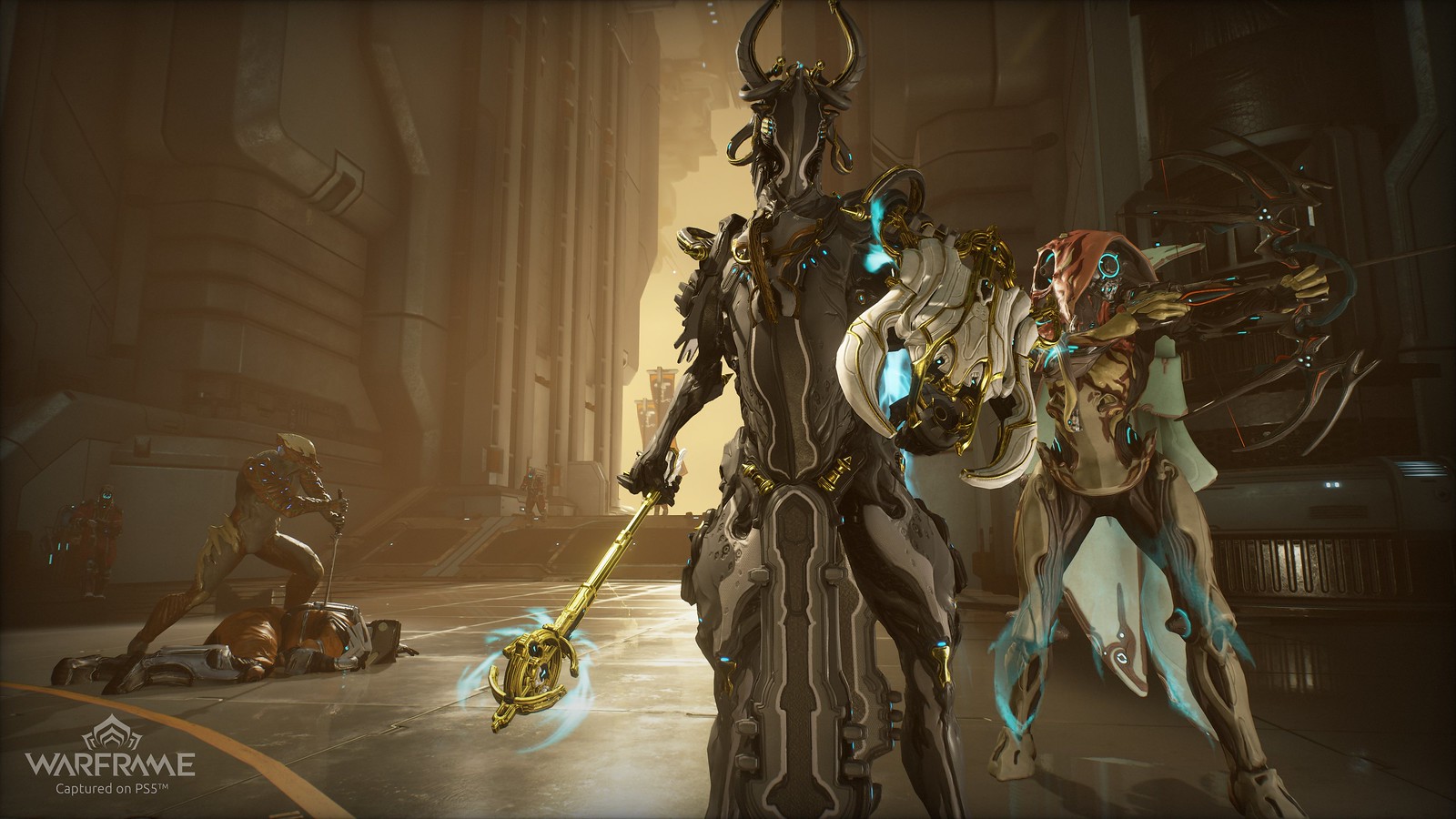 Bask in the stunning atmosphere of Gas City with your squad before wiping out Corpus thugs.

We’ve spent a significant amount of time and energy developing and testing our new enhanced renderer. This rendering technology allows us to create dramatic, dynamic lighting that follows the natural direction and strength of any given light source in an environment. You’ll see it in the muzzle flash of your Weapons firing, in the gleam of your Heavy Sword or in the beaming glow when casting your favorite Warframe’s Abilities.

Dynamic lighting brings all of our open worlds to life, more immersive than ever before. From the neon underbelly of Fortuna, to our newest landscape on the Infested moon of Deimos… there’s no better place to see the stunning differences. The way light from the sun casts long shadows from the trees, the way foliage creates dynamic shadows as you stalk through it, or in the reflections on your Warframe as you stroll through the densely-packed market square of Cetus.

And this is just a new beginning, another chapter in our ongoing journey together. Now that we have the ability to implement dynamic lighting, we can’t wait to build new content from the ground up with technology that enhances the way you play. 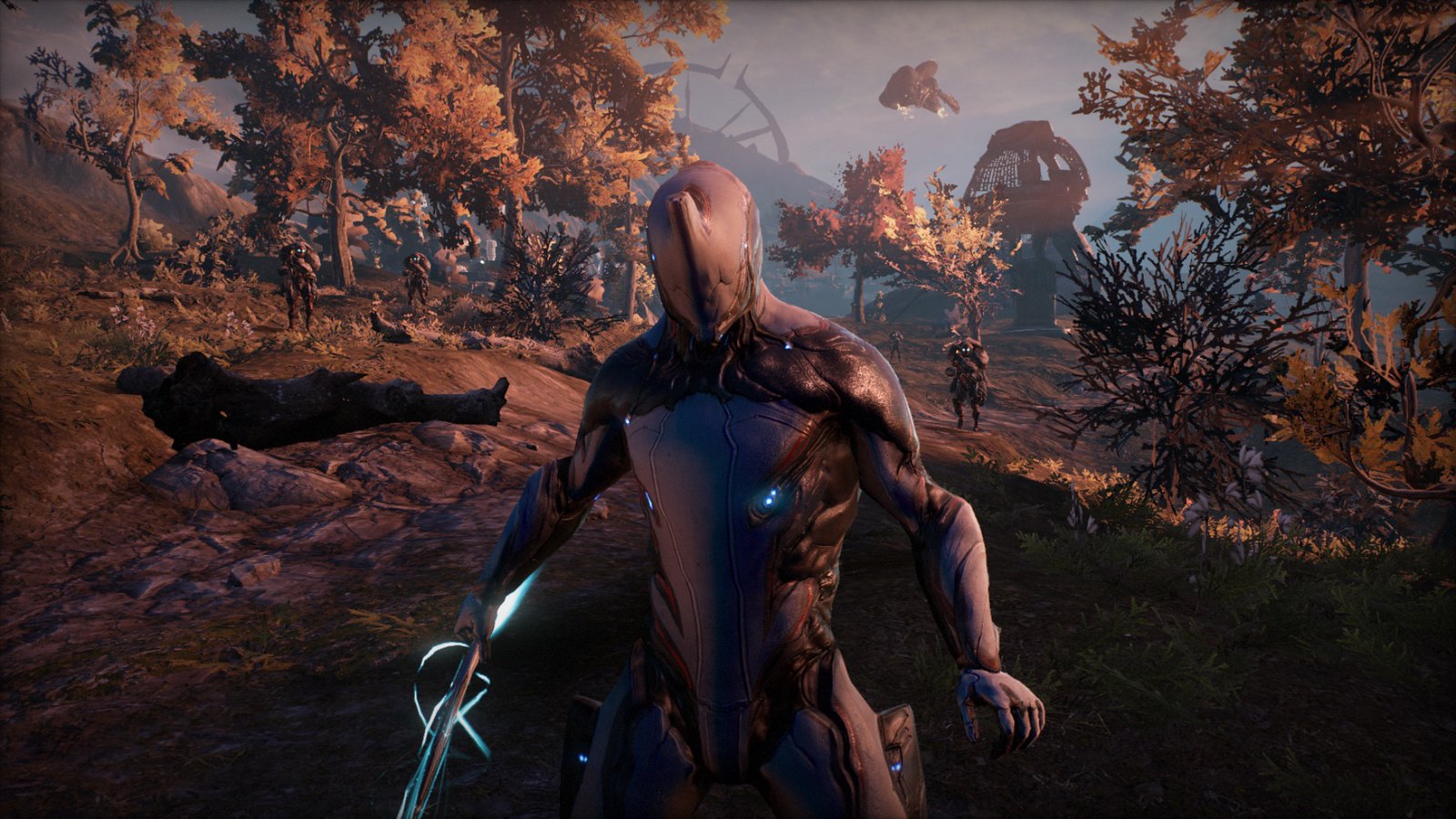 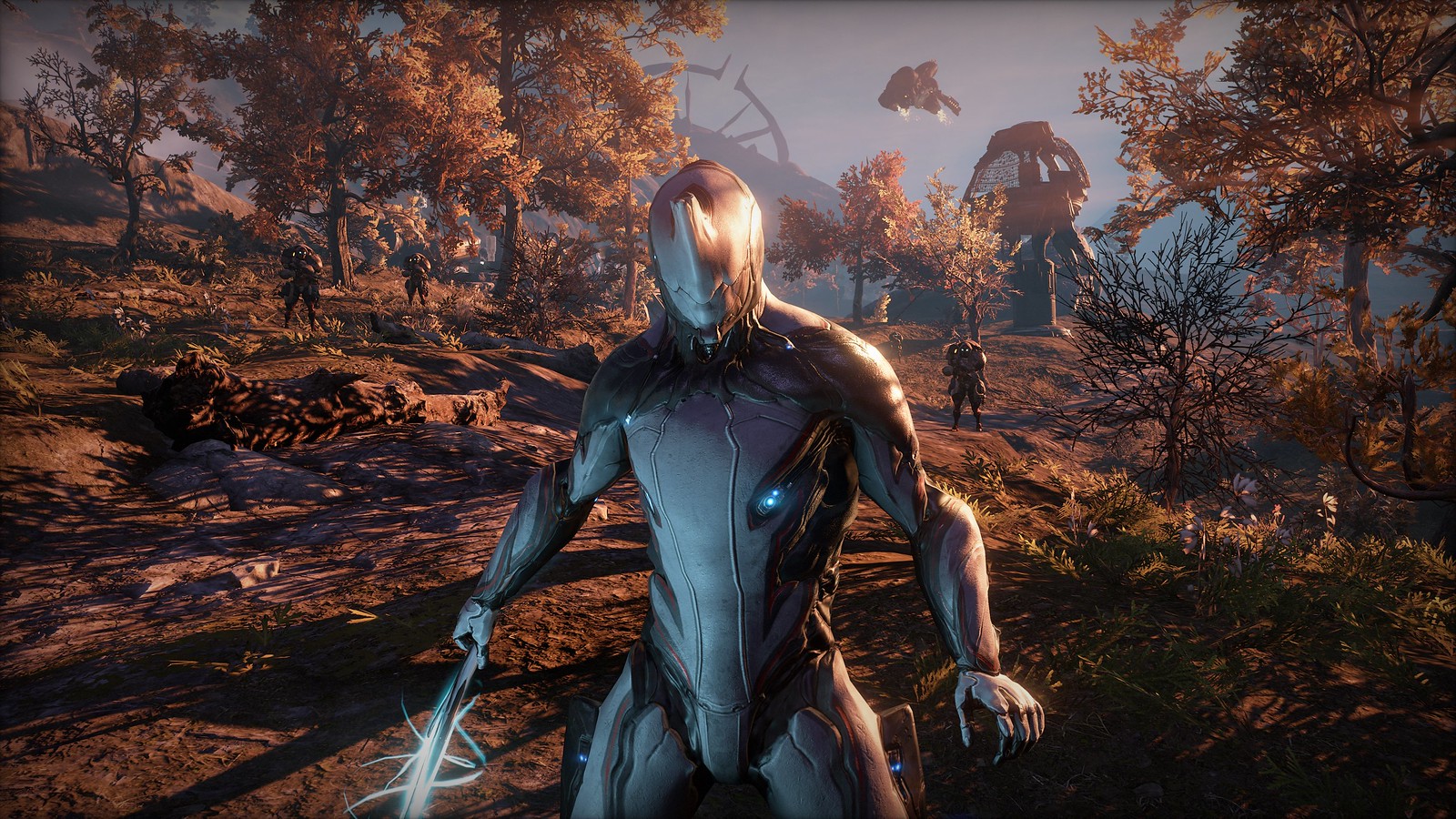 On PS5, Warframe will look and play better than ever. Textures throughout the entire game will be at their sharpest, thanks to a game-wide remaster that will also help you save on space. Running at up to 4K resolution and 60fps means no detail will escape your eye. You could even say that Missions will run as smoothly as Nezha using Fire Walker.

You can also expect improved loading times across the entire game thanks to the next generation solid-state drive. When recording footage for this trailer, we noticed that the load time into our open world Cetus, was several times faster on PS5 than PS4.  You’ll be able to step into your next adventure on the Plains, Orb Vallis or Cambion Drift faster than ever before.

No Tenno is complete without their Squad. Which is why giving you the ability to play with your PS4 friends was a huge priority for us in developing our next-gen experience. You’ll be able to move seamlessly between platforms or play with your Squad regardless if they’re on PS4 or PS5.

What this means for those who are taking the generational leap, is that your profile, along with your progress, will be saved and will follow you to your PS5.

You’ll also have new ways to keep track of your progress, and access to exclusive challenges and rewards with the Activities feature. Progress Activities will show you exactly how close you are to earning a Trophy, while Challenge Activities will get you right into the action with no need to load the game. The first will be a Sanctuary Onslaught Challenge, with more to come!

In combination with improved loading times across the Origin System, our goal is to get you into the action as fast as possible so you spend more time playing, and less time waiting.

When we saw the promise of the DualSense controller and Adaptive Triggers, we immediately realized the potential of creating a more exhilarating combat experience. At launch, you’ll feel the impact of every shot fired with each trigger pull, bringing a new level of immersion and thrill to your actions without comprising the tight, fast, fluid and responsive controls that you can only get in Warframe.

As we explore the more advanced Haptic technology, we’ll soon be able to generate vibration patterns that match in-game environments for greater immersion: feeling the cold snow crunch under your feet on Venus in contrast to the soft-footing of a dusty Mars settlement. We are a strange sci-fi game with moments of intense action, but we also have moments of intimate character interaction, emotional story-telling, mind-body experiences, and explorations of extra-dimensional spaces — those are moments that can also be enhanced while playing with a DualSense controller.

To the Tenno who have been with us for the last seven years, you’ve seen first-hand how much the game has grown. Because of your passion and your feedback, we’ve evolved from a single tileset to 18 planets, 30 Quests, three open worlds and so much more. We’ve taken great pride in building, supporting and playing with you all.

Over the past three years on current generation hardware, we’ve remastered a handful of player-favorite updates with significant gameplay, graphic and sound improvements. Imagine what next-gen fidelity, power and speed could bring to future remasters? The possibilities are endless…

We’re always working behind the scenes to bring you fresh and exciting content, and that promise is one we’ll be living by with what’s to come on PS5. So keep your eyes peeled for Warframe’s arrival on PS5 this year!

Your journey is just beginning, Tenno.

Don’t miss exclusive next-generation rewards, including the PS+ Booster Pack, celebratory in-game Alerts and much more! Join us for the next evolution by downloading Warframe for free now at PlayStation Store and stay up to date on the latest news at warframe.com.

Check out two of Warframe’s recent free game updates, available to both PS4 and PS5 players.