Hold hands alone or with a special someone in Haven, out December 3 on PS5

Play as two heroes at the same time, alone or via local co-op.

In Haven, you play as two lovers who gave up everything and escaped to a lost planet to be together. It’s a romantic RPG about love and freedom, but a strong characteristic of the game is that you play two characters at the same time: Yu and Kay. It’s first and foremost a solo game, in which you play these two characters, but with such a duo for main characters, we couldn’t pass on the opportunity to make it also a couch co-op experience. In this blog post, I’ll dive in details about the co-op experience for the first time.

Haven can be enjoyed solo, it’s designed for that. But at any time in the game, another player can join by simply taking another gamepad and pressing a button. The UI will show that co-op has started, it’s completely seamless.

Here, the UI shows another player just joined and triggered the co-op play.

An important part of the gameplay makes Yu and Kay explore the deserted planet gliding over the grass, collecting flow and food, and cleaning the rust in search for resources and new paths (learn more about the gameplay in our previous blog post). While gliding, one player is leading, and the other is following. The character that is following has the freedom to roam around the lead one. Each time you stop, you can exchange the lead, and “take the wheel” like it’s your turn to drive. 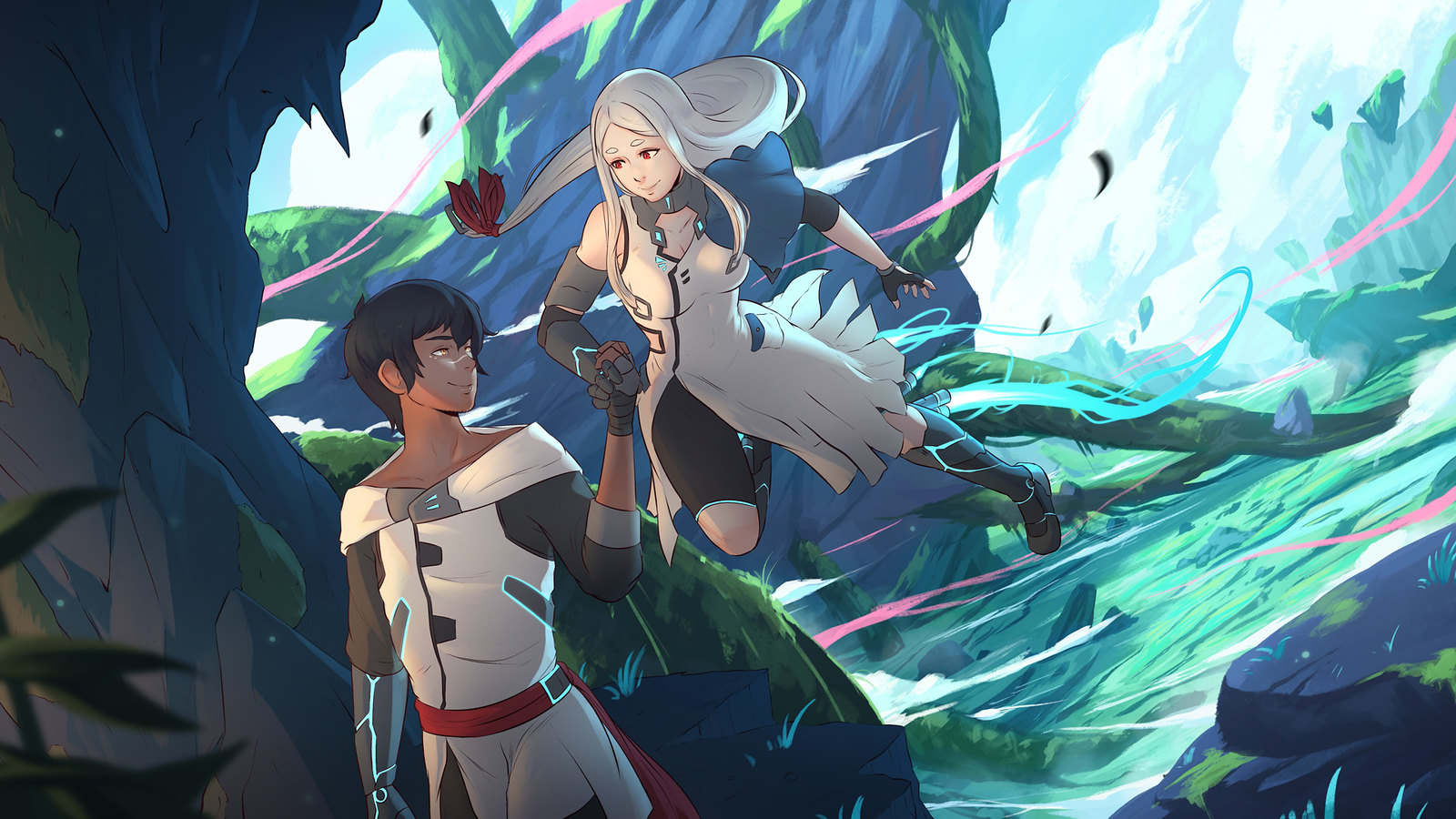 However, the following player is not just a co-pilot. They can control what we call a “flowblob”, a circle of flow on the ground that they can project around them to interact with the world as they glide. They can use the flowblob to clean the rust or gather resources. The lead character chooses where to go and the following character helps clean the area.

The flowblob can also be used to slow down a creature that’s chasing you:

In solo combat, the game pad is split in half. You use the dpad to load Kay’s actions and the buttons for Yu’s. In co-op, each player controls their character. The players have to combine their actions.

For instance one can be shielding while the other prepares an attack.

You can exploit temporary weaknesses by having a player stun a creature, while the other prepares an attack that will make critical damage. Or you can synchronize two similar actions on each character to make powerful duo attacks.

Last but not least, if one of your heroes is down, the other one can help them stand up again.

While it’s common to see co-op mechanics for action gameplay, it’s much more unusual to see them intertwined in the storytelling. Narration-wise, when the characters talk, the player regularly has dialog choices to make, which sometimes have an impact on the game. When playing co-op, both players have to agree and validate the same dialog choice to progress. From what we’ve seen, it’s very engaging and creates heated discussions between the players on the couch.

We wanted to make a game that can be enjoyed by everyone: solo for a deep immersion with Yu and Kay, or co-op with a friend or a romantic partner. As you read this we are adding the finishing touches to the game. Haven will release December 3rd 2020 on PS5 and early 2021 on PS4.