Control your ship by changing direction each time you fire.

My name is Matt Glanville, and I’m the sole developer of Switch ‘N’ Shoot. I’ve partnered with Huey Games who have worked their magic to bring the game to PlayStation 4 in all its crunchy, retro glory. We’re excited to announce today that Switch ‘N’ Shoot is coming to PS4 on November 4.

Switch ‘N’ Shoot is a byte-sized, indie, arcade, score-chasing shoot ’em up in which you face off against endless waves of bug-eyed alien assailants.

But there’s a twist!

The game is played entirely with one single button.

At this point, you might be wondering how you play a shoot ’em up with just one button. Well, it’s actually quite simple… but that doesn’t mean it’s easy. Quite the opposite, in fact.

In Switch ‘N’ Shoot, your spacecraft automatically moves to the left or right, but every time you shoot you switch directions (hence the name). That’s it. There are no other controls. Just a single button to shoot and change direction at the same time.

But don’t let its simplicity deceive you. It’s fiendishly challenging (but always fair, of course). Gloopy space aliens descend upon you constantly and colliding with them spells instant doom, so you must use the game’s ultra-simple control system to time your shots with pinpoint precision and clear a path to the next sector. It’s a nail-biting test of accuracy and endurance which can all be over in a heartbeat (but you can jump back in for another go just as quickly). 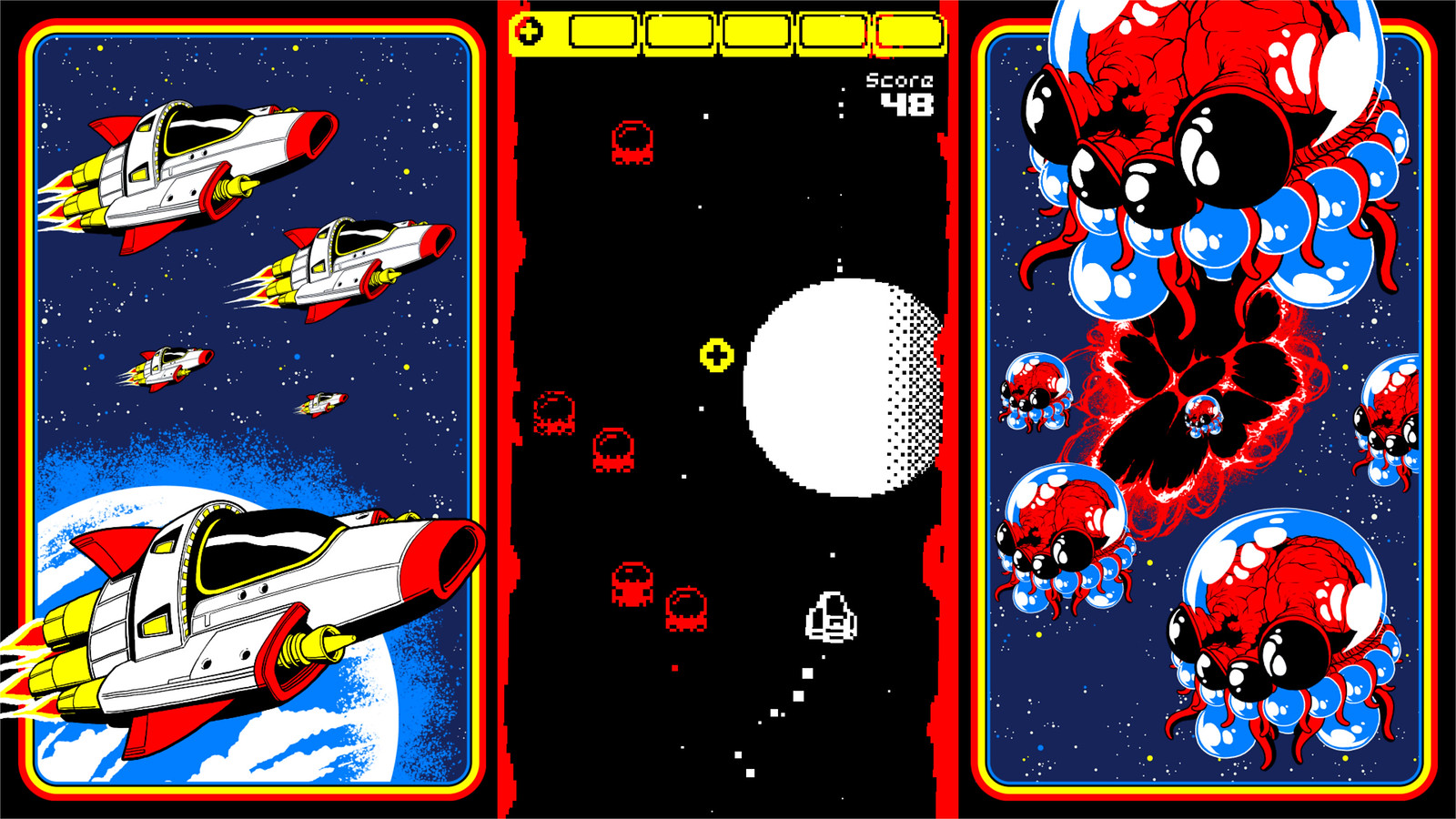 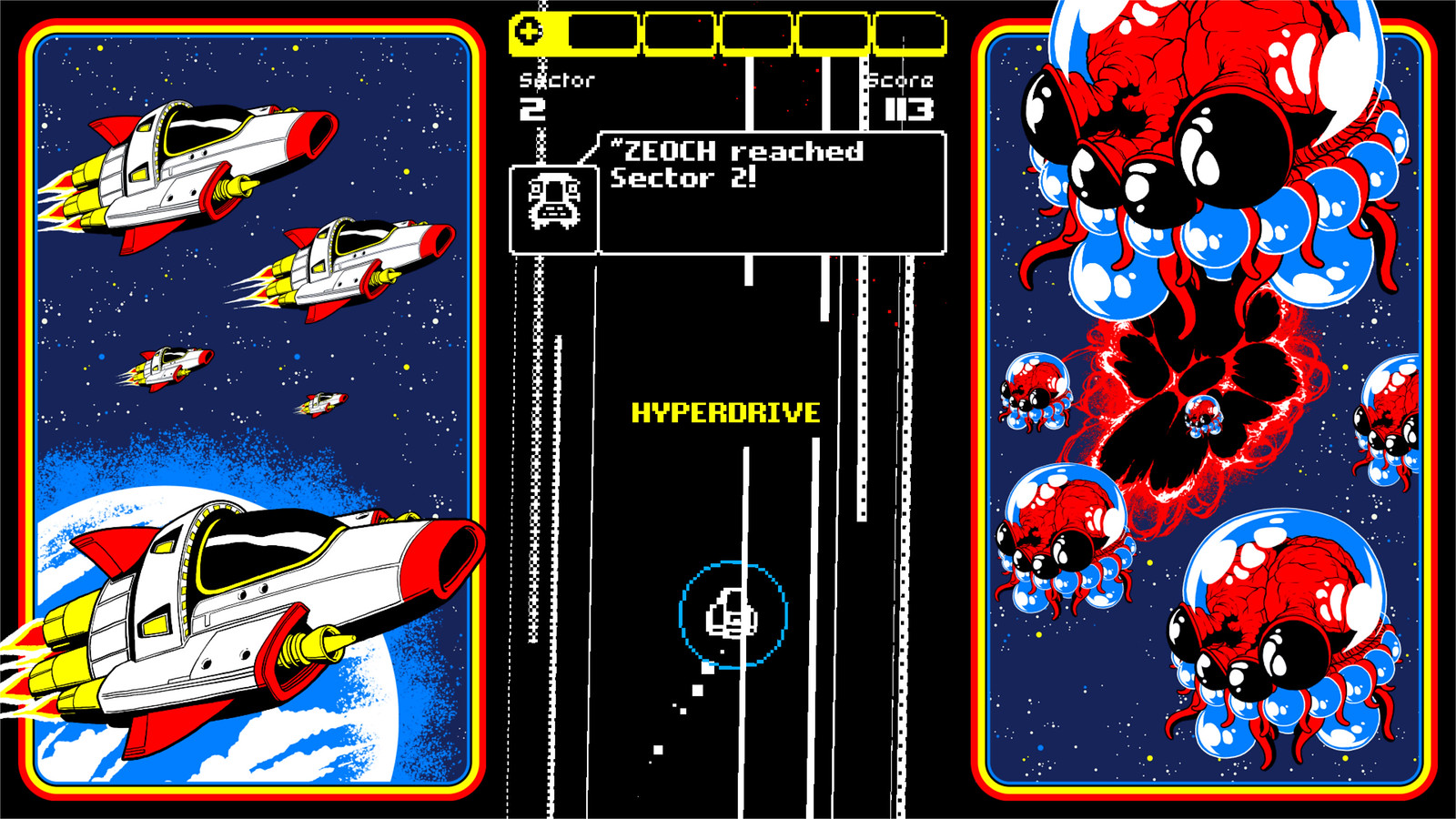 My love for retro games stems from fond teenage memories of playing PS1 with friends or alone, late into the night in a darkened room. I was a huge fan of the Suikoden games, which inspired me to create some games of my very own: the Legion Saga trilogy, released in the early 2000s.

Over a decade later, I found myself working in the games industry and was fortunate enough to become lead game designer of Oddworld: New ‘n’ Tasty, the 2014 remake of Oddworld: Abe’s Oddysee. I’d loved the elegant, minimalist approach to game design since first playing that iconic PS1 demo disc back in 1997, so working on that game was a dream come true for me. The experience also gave me valuable insight into the process of bringing games to the PS4.

Soon after that project was completed, I started work on the prototype that would evolve into Switch ‘N’ Shoot. Below you can see some early screenshots from that first prototype, and how the artwork in the game evolved from concept, to sketches, to the final look: 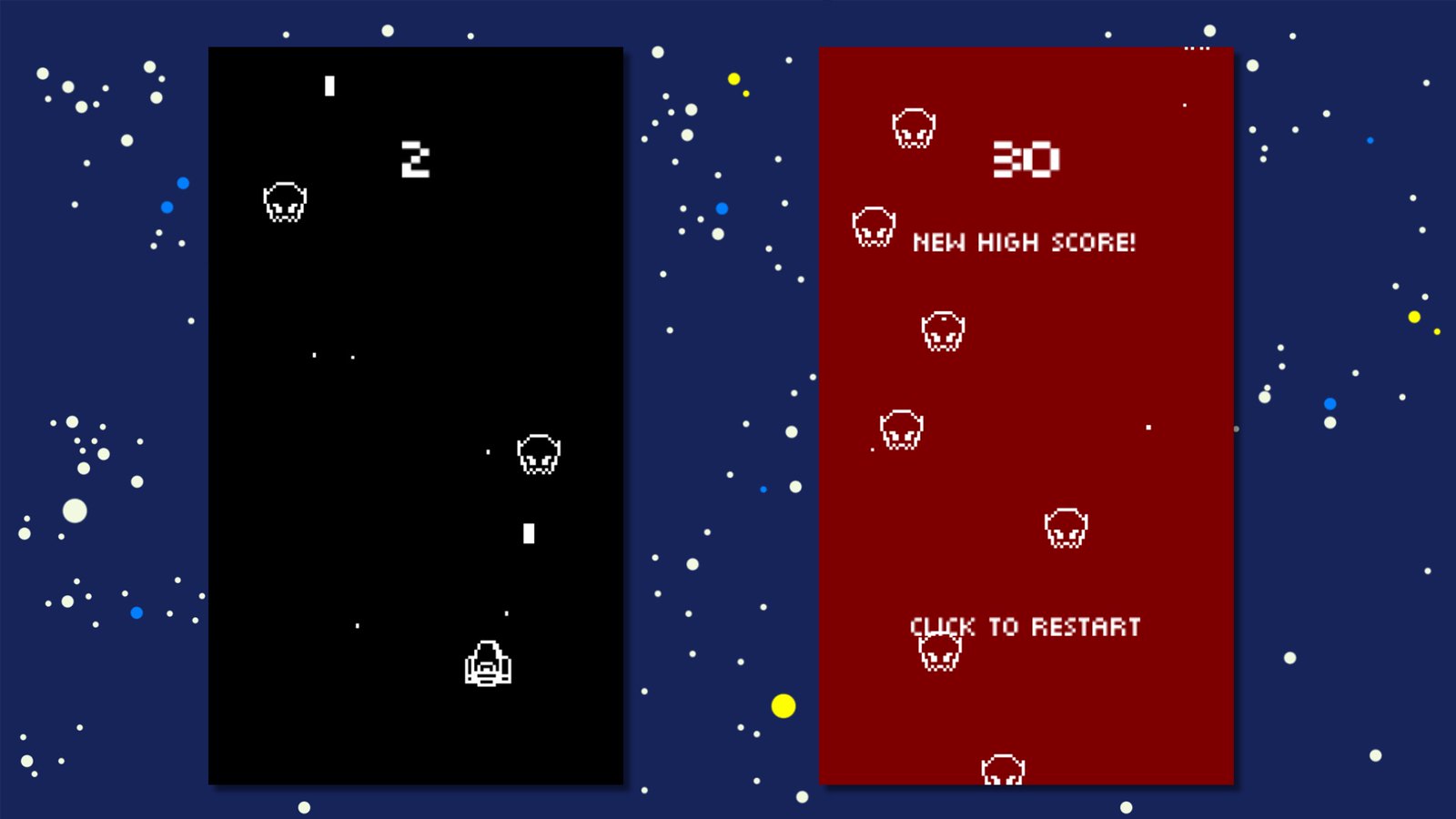 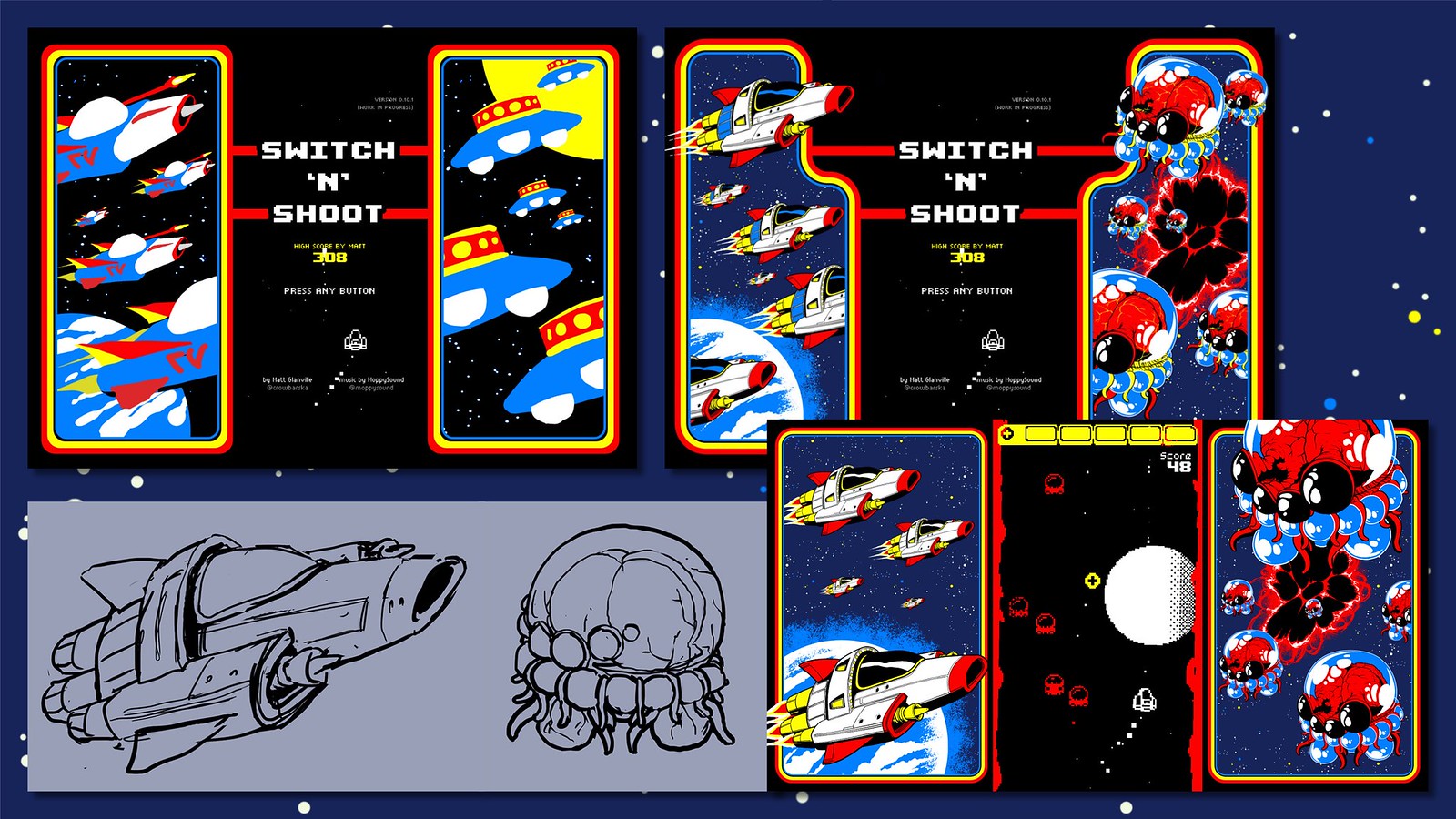 I never dreamed that several years later my own little indie game would be hitting the PS4 as well, not to mention finding a place in the indie arcade scene in the form of full coin-op cabinets, courtesy of DSM Arcade. 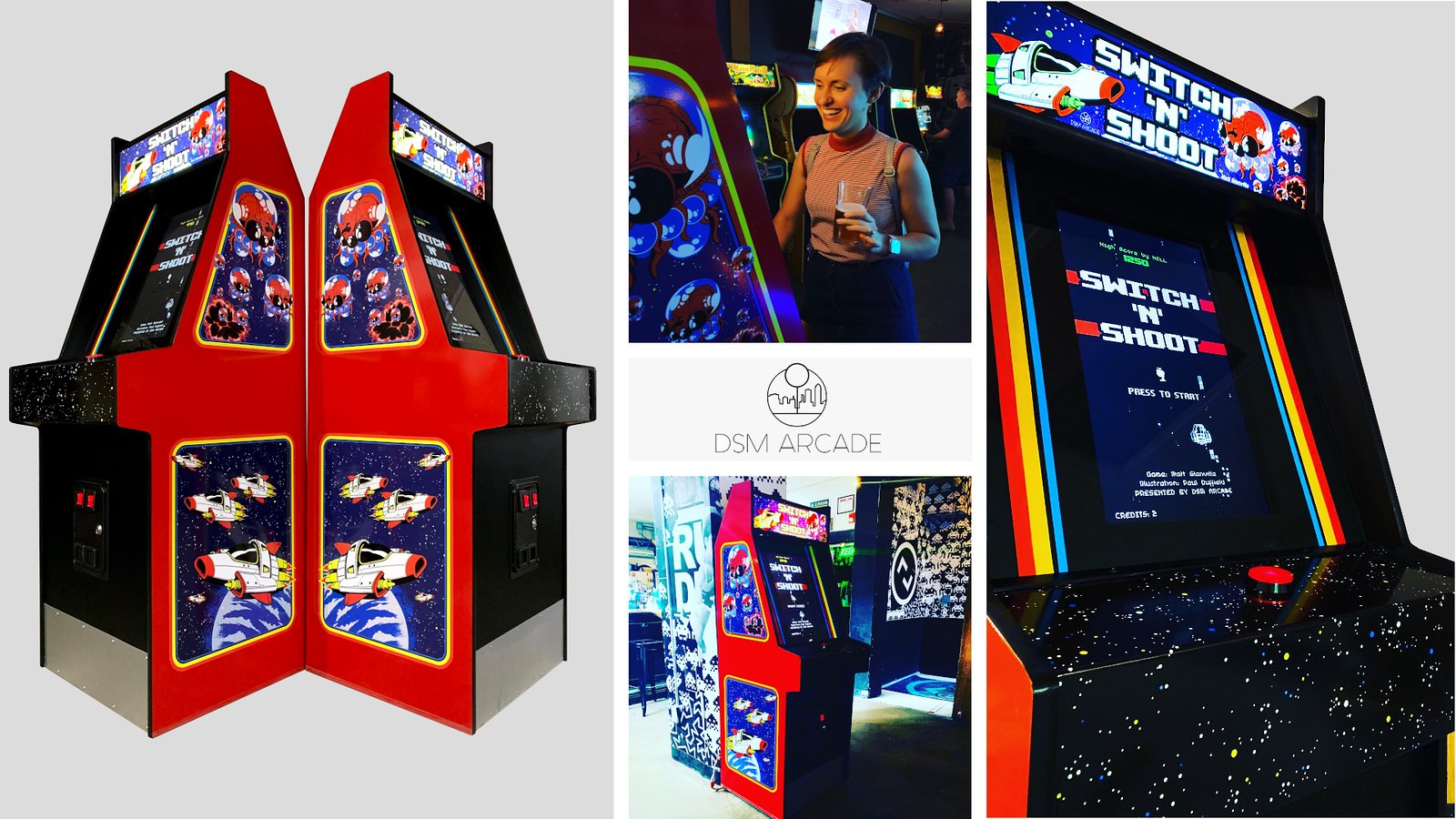 Switch ‘N’ Shoot represents to me a distillation of everything I love in games: simple but elegant gameplay design, a firm-but-fair challenge, a crunchy retro aesthetic, and a cheeky sense of humour in the face of impending doom.

Working with Huey Games to bring the game to consoles has been a fantastic experience and everyone involved is proud to deliver you this juicy little arcade experience.

We hope you have a great time with Switch ‘N’ Shoot when it blasts off to PS4 on November 4!