Inside the cozy RPG world of Wintermoor Tactics Club, out tomorrow on PS4

How can a tactics RPG feel warm, inviting, and inclusive?

With Wintermoor Tactics Club, our team set out to make a Tactics RPG that feels cozy to play, like curling up with a good book. To celebrate Wintermoor’s arrival on PS4 tomorrow, we wanted to talk about what that means and why we think it’s important. How were we able to make a game that feels warm and inviting to first-time Tactics RPG players, without sacrificing a sense of challenge and adventure?

We wanted Wintermoor to feel like a cozy place to relax and hang out, something you could play as comfort food. So we tried to focus our story around a character who is herself trying to find comfort in a chaotic environment.

Our main character Alicia is someone who loves games and fantasy stories. Far from her family in Wintermoor Academy, she feels most at home when playing the table-top RPG “Curses & Catacombs” with her friends in their Tactics Club. This is threatened when the club finds itself tangled up in a high-stakes snowball tournament where if they don’t win, they’ll never be allowed to meet again. As you play, Alicia uses her imagination to bring these battles and other challenges into a world she can understand and master.

Despite the high stakes of the tournament, we didn’t want the world to feel grim or hostile. Instead, we populated the campus with a variety of quirky characters and clubs like the “Psychic Detectives” and a student trying to predict the stock market using magic. The quests in Wintermoor give you a chance to get to know these characters: learning about their problems, hanging out, and sometimes even writing an RPG campaign to help them sort out their issues, Even when Alicia sometimes feels alienated by the campus, we want to show the player some absurdity and humanity to help them smile through the more dramatic events of the story.

We tried to choose an art style and soundtrack that support this feeling of cozy nostalgia as well: the art is an illustrated, storybook style inspired by Western animation, while the soundtrack takes equal inspiration from indie film scores and PS1-era classic games. We hope the combination will make the player feel right at home at Wintermoor Academy.

Can combat be cozy?

Though it has a warm tone, Wintermoor Tactics Club is at its heart a Tactics RPG centered around turn-based battles. Alicia must face the other clubs in snowball fights, and make friends by playing a combat-focused tabletop game. We put a lot of thought into how we could make combat (which in TRPGs is usually both violent and highly complex) into something that fit into a cozy RPG and felt welcoming to new players.

First, our goal was to make this combat as accessible as possible, so players wouldn’t feel lost or hit frustrating roadblocks. We put a ton of work into making everything that affects combat visible onscreen.You don’t ever have to look up abilities or check enemies’ equipment. We kept all the numbers low and avoided randomness, to make their effects easier to understand and plan around. We wanted to keep depth for TRPG veterans to enjoy, through selecting characters with very different abilities and customizing their upgrades. But players who mostly enjoy story-focused games might find Wintermoor the perfect introduction to the genre!

Next, we tried to make the combat and narrative interconnect in as many ways as possible, rather than having battles that feel disconnected from the tone of the story. Characters have combat styles that express their personalities, and talk with each other in battle depending on the player’s actions. Hanging out with the cast of Wintermoor rewards you mementos that serve as equippable upgrades. Some of the tabletop battles are even written by Alicia, so the player gets to make choices that affect the type of challenges you face.

A story about inclusivity

The reason we wanted to make Wintermoor feel cozy is to set the backdrop for a story with a relevant and positive message. Partly since we have an underrepresented protagonist, we chose to examine the importance of inclusivity: how difficult it can be to connect with someone from a different background, and how to overcome feelings of “gatekeeping” beloved hobbies.

Rather than settling for a pat or simplistic message, we strove for a story that substantially tackles why inclusivity is challenging and how social groups can overcome those challenges. As a major part of it, we strove to feature diverse characters that are more than just tokens: we wanted each of these characters to feel like individuals with their own lives, perspectives, and problems, and explore both the complexities and rewards of bringing them together.

It might come as a surprise in a game set in the 80s, but Wintermoor is an allegory for the ways in which the Internet creates isolated groups with an “us versus them” perspective. The framing of an “80’s sports movie” seemed like a good way to tackle the idea of a world where everyone thinks of themselves as the underdog, trapped in a competitive mindset that reduces both their opponents and themselves to being wholly defined by a single group identity. It takes exceptional empathy and bravery to break out of that mentality when it seems like the world is against you, and we hope Alicia’s story can inspire some players out there to try. 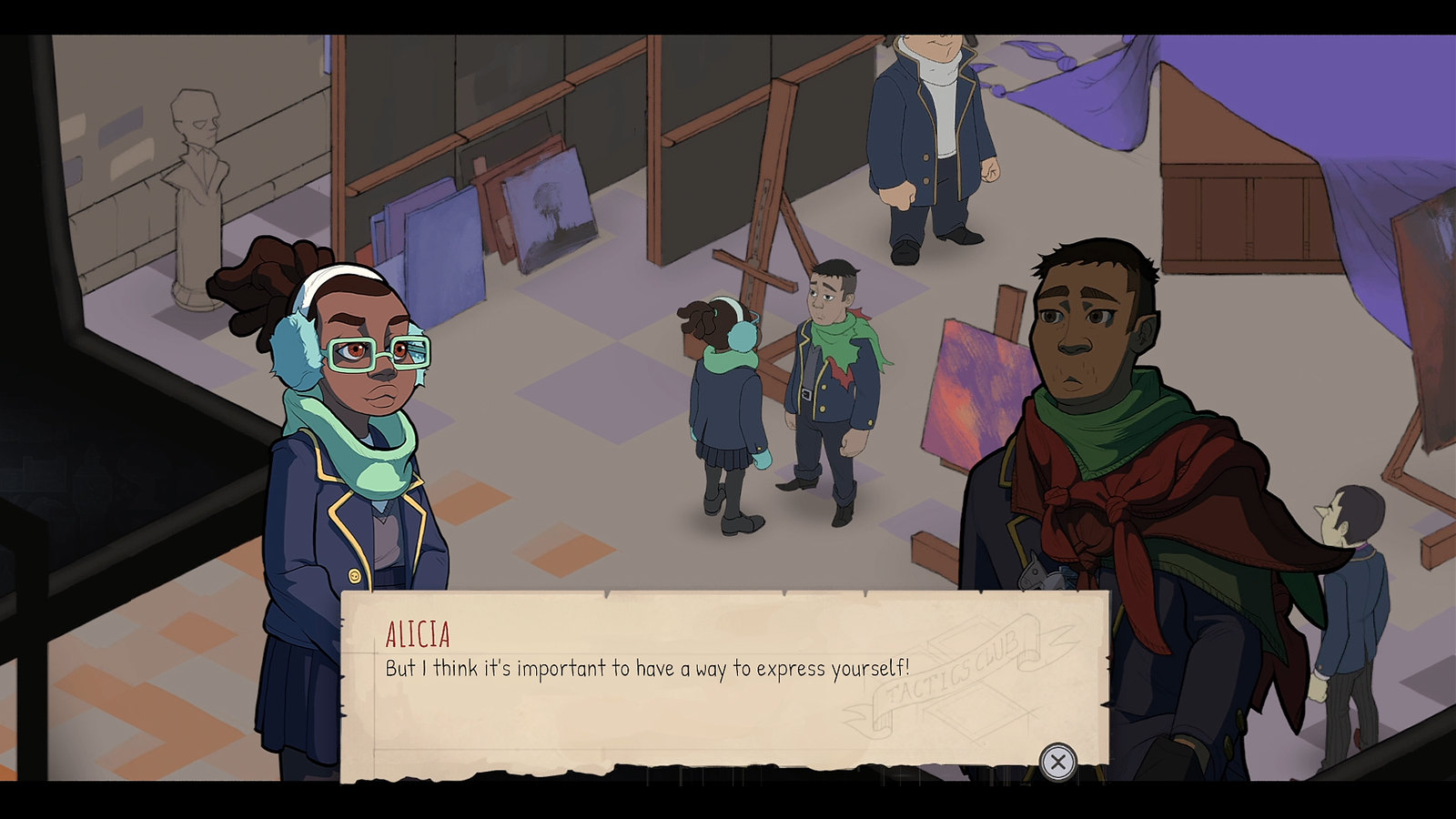 We’ve been thrilled with players’ reactions to Wintermoor Tactics Club so far, and we’re delighted to bring it to a new audience! It’s an honor to join the proud tradition of RPGs on PlayStation consoles. In celebration of launch week, Wintermoor Tactics Club will be 20% off for PS Plus subscribers! We’re selling the game and also a bundle of the game and soundtrack.

From our whole studio, we hope you’re able to find a home at Wintermoor!

*Update: an earlier version of this post stated Wintermoor Tactics Club was out today. It’s been corrected to state the right release date, which is tomorrow.