Get acquainted with the over-the-top world of Captain Tsubasa, out now on PS4.

Players, pick up those controllers – Captain Tsubasa: Rise of New Champions is available for PS4 today! Flashy moves, over-the-top combos, intense matches – this is more than just your average soccer game. Captain Tsubasa: Rise of New Champions brings exciting, action-packed gameplay along with a heart-felt storyline and a cast of characters that fans around the world have come to love. Before you take to the field, we have prepared a quick guide to help you as you begin your road to victory.

Take a look at this diagram to get a feel for the basic controls: 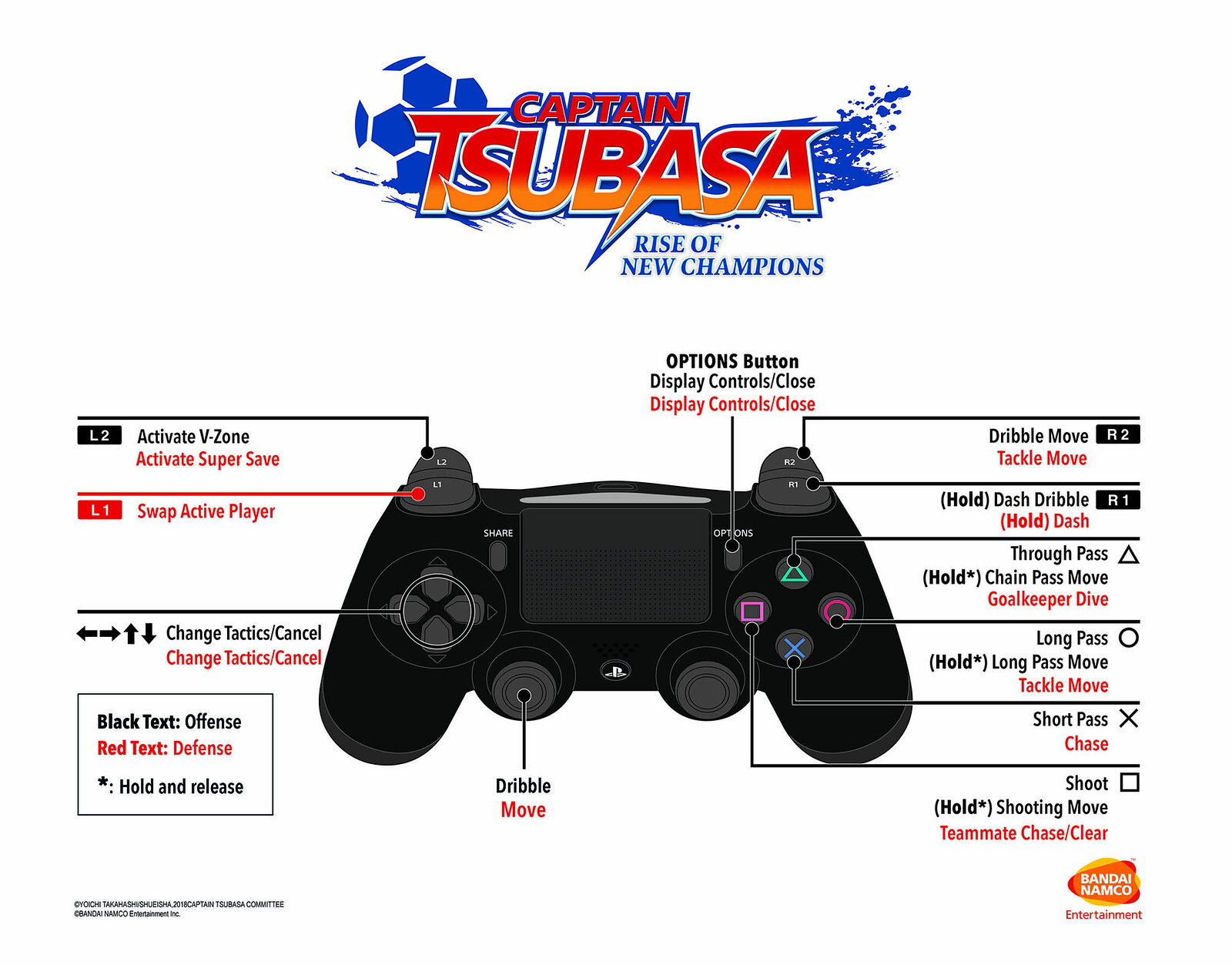 Remember that you can hold the triangle, circle, and square to charge these moves.

Hold the shoot button (square) to perform a powerful shooting move to wear down your opponent. Be strategic about these shooting moves, as they will deplete your players’ spirit gauges.

This gauge is depleted when you take certain actions, such as dashing tackle moves, special shots, and saves. As your spirit gauge is depleted, it will take longer to charge shots. If it is too low, you won’t be able to dash or do special moves. The spirit gauge recharges for all players but behaves differently for goalkeepers. 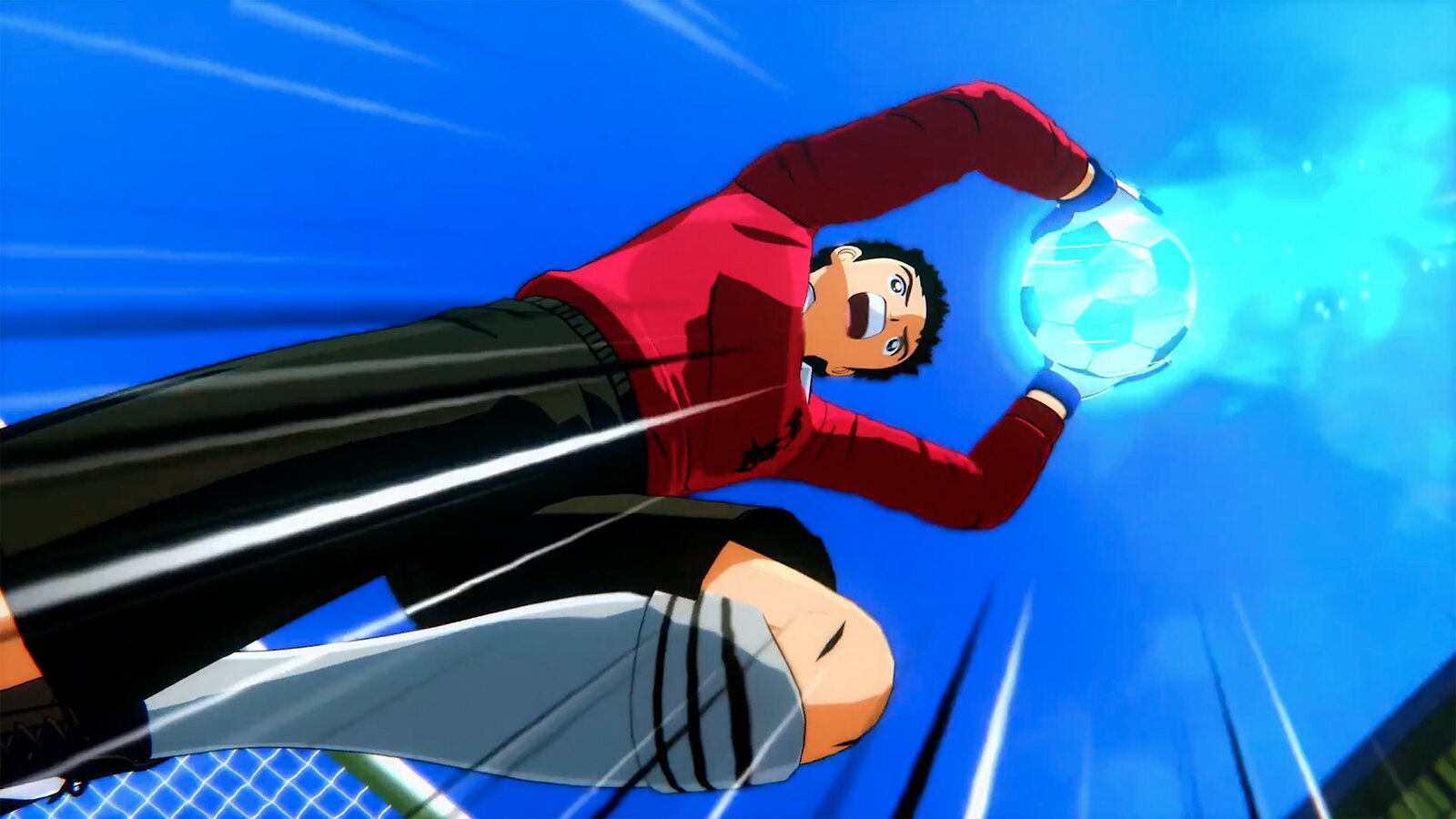 Goalkeepers lose spirit gauge when they save shots. Unlike other players, their spirit gauge recharges at half time, and only if they let a goal in. Try saving your spirit gauge to wear down the opponent’s goalkeeper using a shooting move until you can make a goal.

Fans of the original series will be excited to know that they can execute their favorite iconic moves from the anime in this game.  There are many combinations of plays that can lead to jaw-dropping combos, so our advice to you is:  experiment, experiment, experiment! In the meantime, here are a few flashy combos to help you get started.

If you have Tsubasa and Misaki running up a pitch together and one of them has the ball, hold Triangle until the bar is full to execute a Combo Pass Move that is extremely difficult to counter. Keep tapping Triangle in time to quickly get past the entire opposing team.

If the ball is centered into a penalty area and the Tachibana brothers are there, hold square to perform Skylab Hurricane, an extraordinary move that is unlike any you’ve ever seen.

If two compatible players are near each other when you charge up a shot, they will combine forces and kick the ball at the same time. Experiment to find which players can perform this move.

If Sano is in the right position, make a shot from the back lines with Jito to perform the Hirado Combo. Sano will change the course of the ball with a header, slipping it past the goalkeeper!

One of the most important mechanics in the game is the V-zone, a powerup that affects the entire team. Watch the V gauge at the bottom of the screen – once it’s full, activate it with L2. When V-zone is activated, your spirit gauge lasts longer and recharges quicker. Shots will also charge faster.

Don’t have possession of the ball? V-zone also helps with defense! When the V-gauge is full, activate it when your opponent does a shot to perform a super save which prevents them from scoring.

In short, don’t sit on a full V-gauge. Instead, use it to tip the scales in your favor to ensure victory.

That pretty much covers the basics. Don’t forget to check out the Training Mode – just like with real soccer, you will have to spend time practicing in order to perfect your strategies and discover cool combos. Additionally, what sets this game apart from other soccer games is the extensive Story Mode, so be sure to check that out as well while you’re at it.

Pick up Captain Tsubasa: Rise of New Champions today to receive a bonus DLC pack. Purchase the Deluxe Edition for additional bonus items, and the Character Pass, which gives you access to nine DLC characters.

I hope to see you on the field!