Fall Guys: How to survive four rounds of this competitive shove-‘em-up 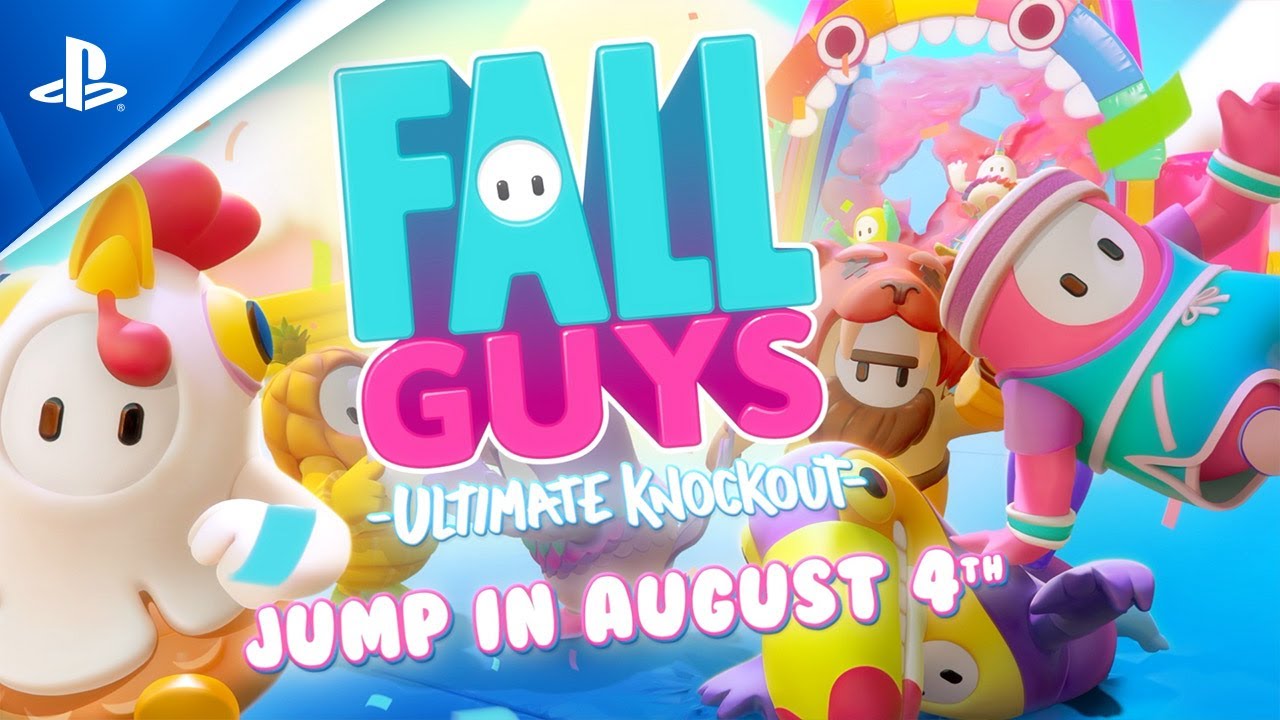 Hit the ground running with these tips for Ultimate Knockout’s multiplayer obstacle courses.

Fall Guys: Ultimate Knockout is coming to PlayStation Plus next week! With launch just around the corner, we wanted to give our contestants a closer look at four of the 25 Rounds they will be playing when we open the doors to these blindingly colorful courses on August 4. If you want to get ahead of the pack with some insider tips and tricks then this is the blog post to be reading!

Created from the mad imagination of our Senior Game Designer, Anthony ‘Peps’ Pepper, The Whirlygig is one of our iconic ‘Gauntlet’ levels that pit our contestants against the toughest, funniest obstacles we can come up with! Designed for 60 Fall Guys at max capacity, The Whirlygig was inspired by the giant windmills seen on classic mini-golf courses—but with the chaos turned all the way up to 11. Giant spinning propellers, conveyor belt launchers and huge sweeper arms mean Fall Guys get flung further across the arena than on any other Round, and this is where our first Top Tip lies…

Any contestant worth their salt can dodge the rotating sweepers near the start, but the real skill comes from using them to catapult your Fall Guy forwards towards the finish line! This is especially useful for getting ahead of the pack as having a clear run up the giant steps keeps you out of the ensuing chaos of the stragglers behind!

How to play:
Hoopsie Daisy is a Team Round, meaning that all remaining Fall Guys get put into teams mid-Show, with the losing team being completely eliminated! This Round requires contestants to dive through hoops to score points for your team. Regular hoops are worth one point, but keep an eye out for rotating golden hoops that are worth five whole points! These can be the key to an epic comeback that saves your entire team from elimination.

Joseph Juson, the designer behind this slapstick round found inspiration from video clips of circus performers jumping through hoops, “it felt incredibly important that we give Fall Guys the opportunity to do the same. Once we realised how good it felt to see your little jelly bean fly through a hoop we knew we needed to make this Round a reality!”

Top Tip: Hold them back!

Sometimes you’re never going to be the one to reach a Hoop, but if a Fall Guy from another team is close by try grabbing them to slow them down while they squirm to escape your grasp! You might not be the one nab the points but slowing an opponent down might just give your team-mate the extra time to steal the Hoop and take the win!

While most rounds test your reaction times, Perfect Match requires concentration and a good memory to progress. First, a grid of tiles will flash with different fruit at random — try to keep track of which fruit has appeared where! After a few seconds one of the fruit you saw will appear on the jumbotron above you, and from this point you have five seconds to stand on a tile that matches the fruit displayed! Get it right and survive — get it wrong and you’ll be swimming in the slime below. Lead Level Designer, Meg Ralph, explains, “We wanted to try a Round that was more logic based. Testing a player’s memories while still having an element of physicality has been a really interesting experiment for us! Got to keep contestants on their toes!”

Some contestants just haven’t got the skills to keep up in Perfect Match, and will end up following the crowd’s decision. Try standing on a tile you know is wrong to lure unsuspecting fools into joining you, and then jump to the correct tile at the very last second! There’s nothing more satisfying in Fall Guys than tricking others into getting eliminated early.

Roll Out is a 60 player survival Round, meaning that one missed jump will cause instant elimination! Contestants start standing on the top of a giant roller, but as the round starts segments of this roller will start to rotate in different directions, speeding up over time. Nowhere is safe for long, so contestants must do their best to survive until the round ends. Pay special attention to others — avoid colliding into them and being sent tumbling to your elimination!

Another J.J. masterpiece, Roll Out’s inspiration stems from those rotating carnival Fun House tunnels “In the initial prototype, players had to survive inside the tunnel, but this proved tricky from a camera control standpoint. The concept was saved though, thanks to Meg’s genius twist — have the level take place on top of the tunnel instead!”

Fall Guys must jump across gaps in the rollers if they want to avoid elimination, and these gaps are the perfect place to set a trap. Linger near an unsuspecting Fall Guy (maybe give them a friendly wave to lure them into a false sense of security), and as they go to jump, grab them briefly to throw them off their timing. If you’re lucky they’ll plummet into the slime below and you can pretend nothing ever happened. Be careful though, if they survive they’re going to want revenge. Best get running!

The Whirlygig, Hoopsie Daisy, Perfect Match and Roll out are only four of the 25 rounds you’ll find in Fall Guys: Ultimate Knockout. Now that you’ve got the skinny on some elite-level strategies be sure to jump in on August 4 and we’ll see you on the start line!