Put an end to Suffering with these essential Othercide tips

How to effectively wield your army of Daughters in this moody tactical RPG, out tomorrow on PS4.

Hello everyone, and welcome to the dark and beautiful world of Othercide. Othercide is a tactical RPG cast in black, white, and red where you control an army of Daughters, echoes of the greatest warrior to ever live, against the forces of the Suffering Other. With bullet, blade, spear, shield, and all the wit you can muster, you must defeat Suffering and save reality.

Sound fun? We think it is, and it’s coming your way on July 28. In this blog, we’re laying out a load of the basic systems of the game, as well as giving advanced tips for your war. Remember: never give up.

Use the Dynamic Timeline System. 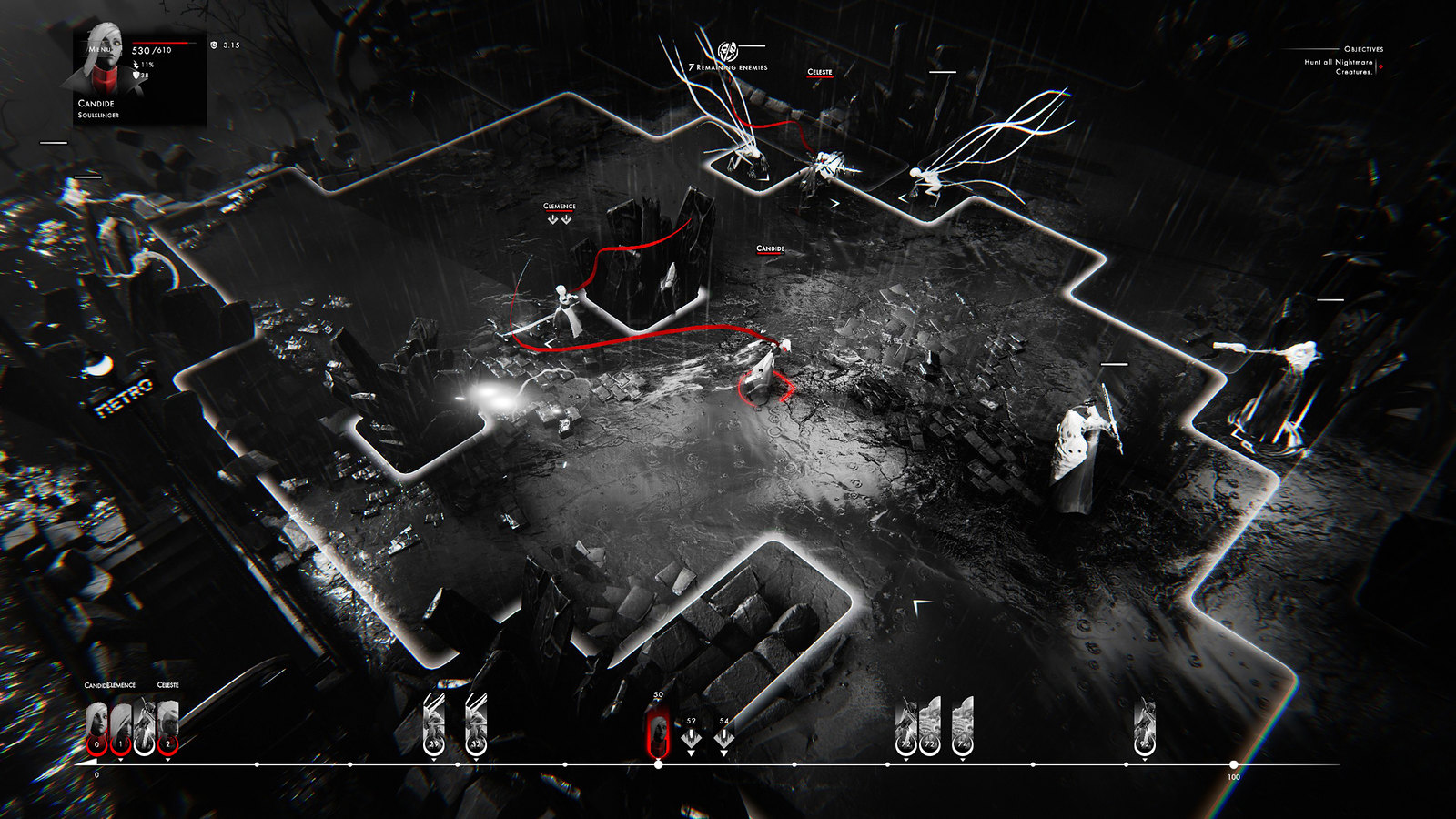 There’s a reason we’ve been talking about this so much in the lead-up to release — the Dynamic Timeline System is everything in Othercide, and it’s how you’ll win the day. Rather than turn-based battles, Othercide’s action takes place on a timeline of actions, reactions, and interruptions. Moving around the timeline — speeding up your forces, slowing down enemies, and placing traps, hazards, and exclusion zones to trigger at specific times is vital to victory.

Moving your units and enemies around the timeline is an extremely powerful ability, giving you the first strike and follow-ups at key moments. Just a small delay can turn a devastating defeat into an incredible combo of hits for triumph.

Save your action points. 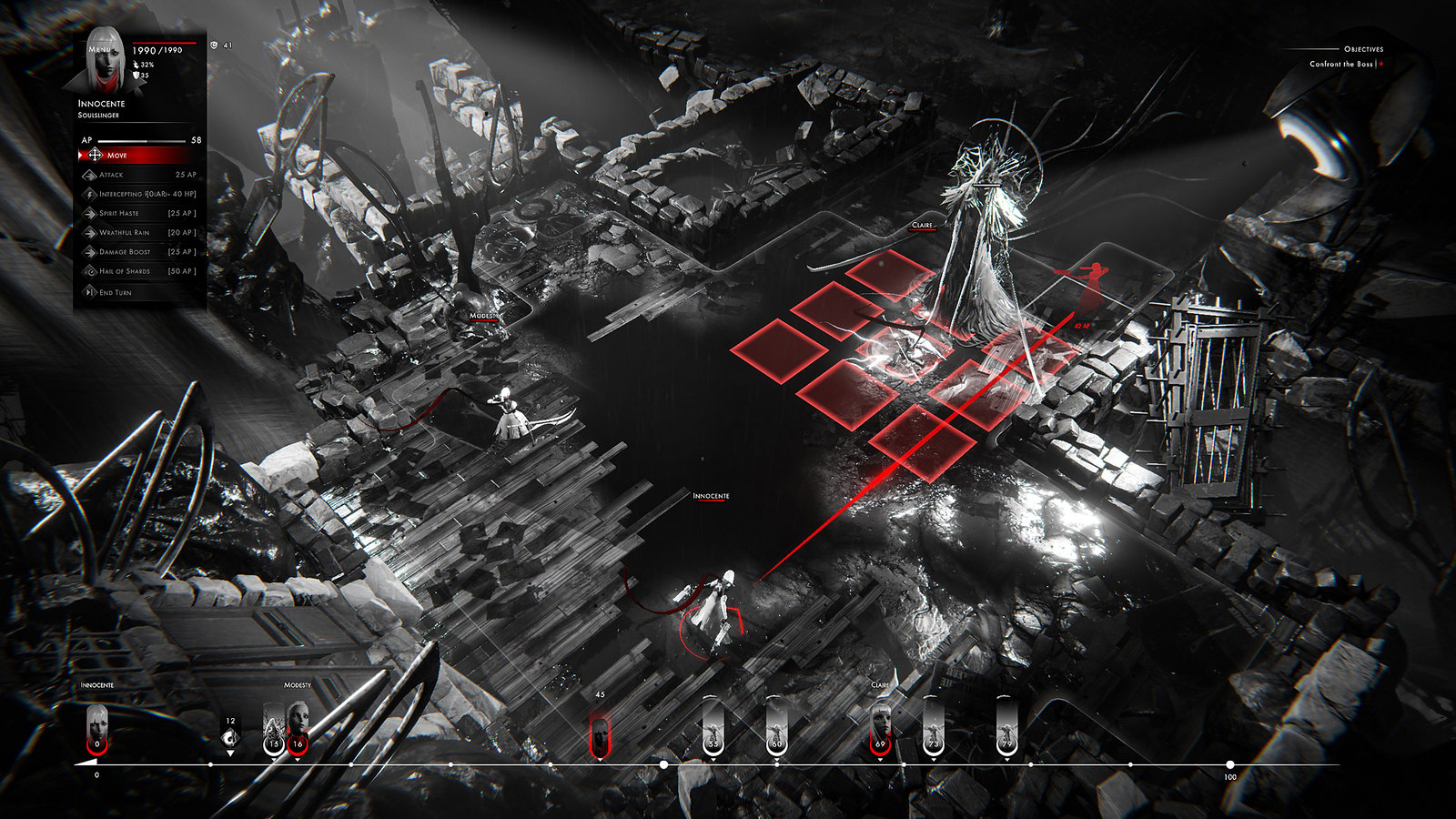 Action points are what determine what you can do at any one time, and also how fast you can act again on the timeline. Using half (50) or less of your action points will let you act again sooner. Burst actions, expending all your AP, are tempting but will massively reduce how often you can act. The forces of Suffering are swift, so this may leave them with several actions before your next moment to move and attack. Of course, expending all your AP means more damage, more moves, better positioning now – what’s the best bet? Plan carefully.

Othercide’s three classes have various abilities that can trigger off other daughters defending against or striking enemies. The gun-wielding Soulslinger may stop enemy attacks or react to them taking damage. The Shieldbearer can protect nearby allies or herself, and delay enemies or move them around the battlefield at will. The Blademaster can hit any enemy that comes close to her, as well as being the perfect way to start off a combo with her huge basic attack damage.

There are even more mysteries to discover as you progress, with rumours of other daughters lost to the darkness of forgotten memory. Teamwork is your incredible advantage over the forces of Suffering — their individual power should not be underestimated, but together you are far stronger. Experiment, explore — combine for victory. 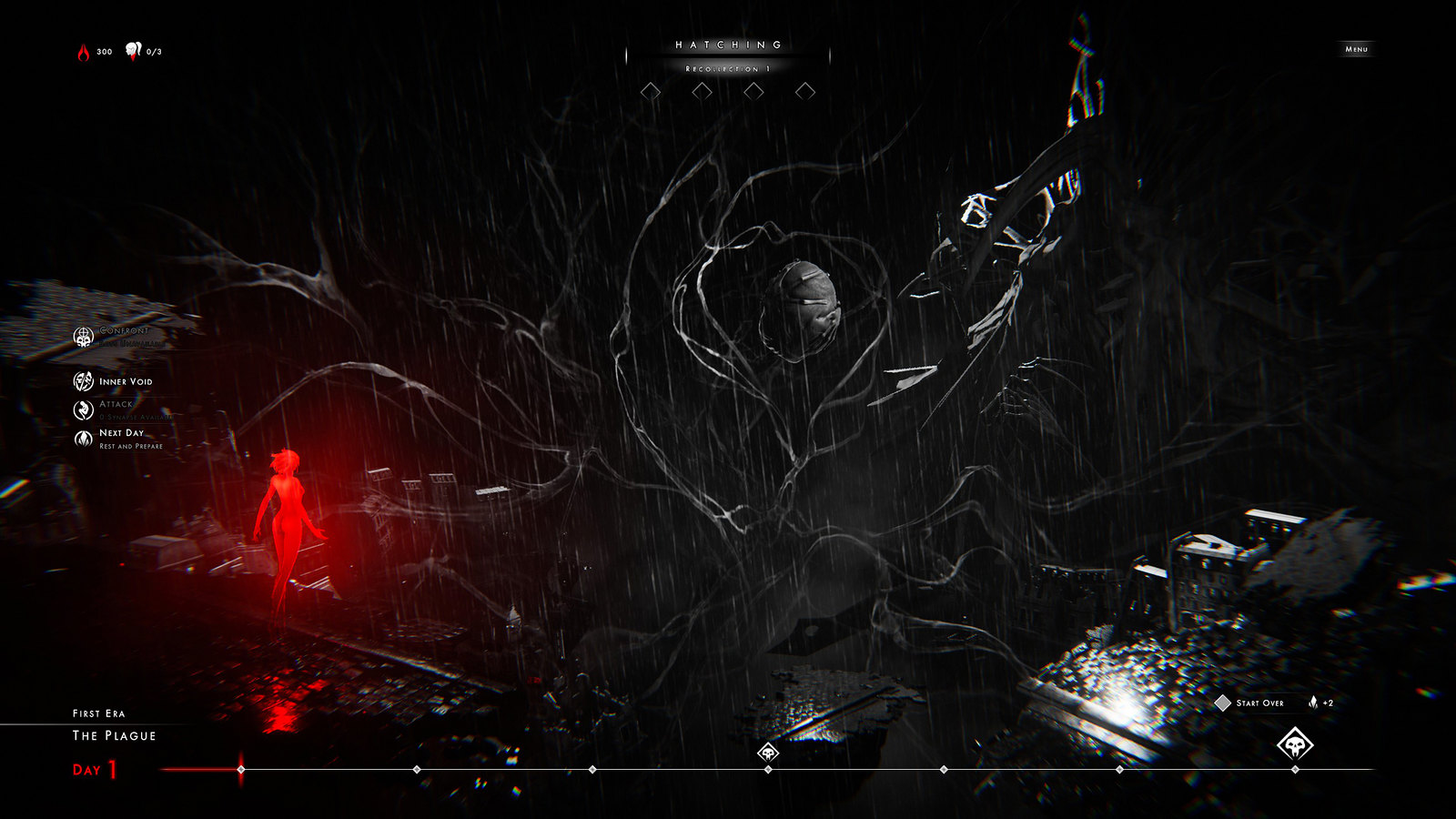 In Othercide, failing is not the end and is an expected and encouraged part of the game. Your defeat will come but every failure is a learning experience and holds its own rewards. Pushing deeper into the Age of Shattering will unlock new Remembrances, and these can be used to enhance your future attempts. They’re powerful, and there are plenty of choices to be made on what options to pick and how to exploit the bonuses they give. Plus, a new run doesn’t mean resetting to zero – Daughters and progress can be kept, for a price. 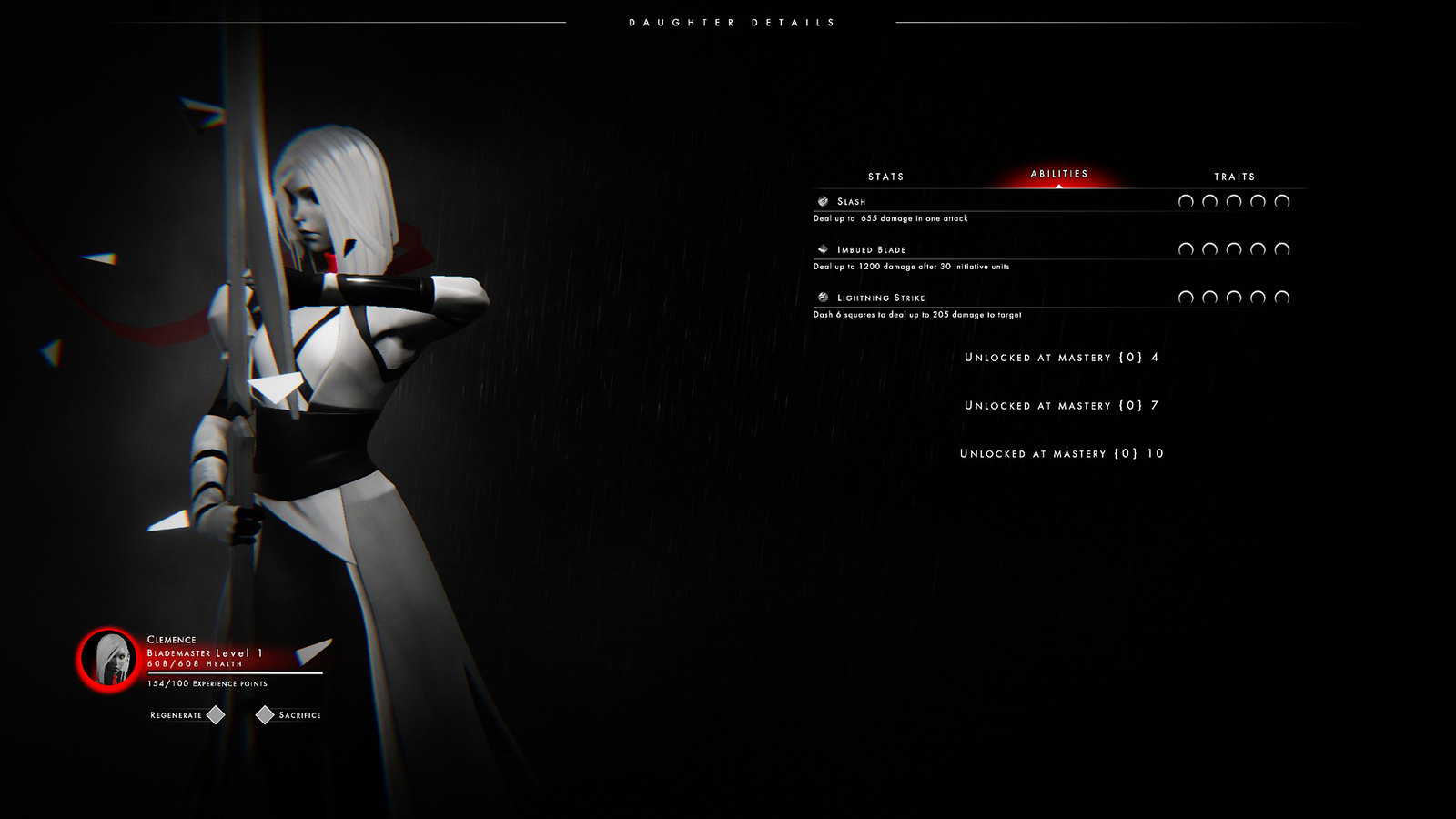 In a similar vein, do not hesitate to do a run only to unlock specific bonuses and Remembrances that will make your life easier in the future. You can check the unlock requirements and rewards as part of the codex. This combines with the Memories system, allowing you to customise every one of your skills towards a specific purpose. Some Remembrances even improve or provide additional Memories. 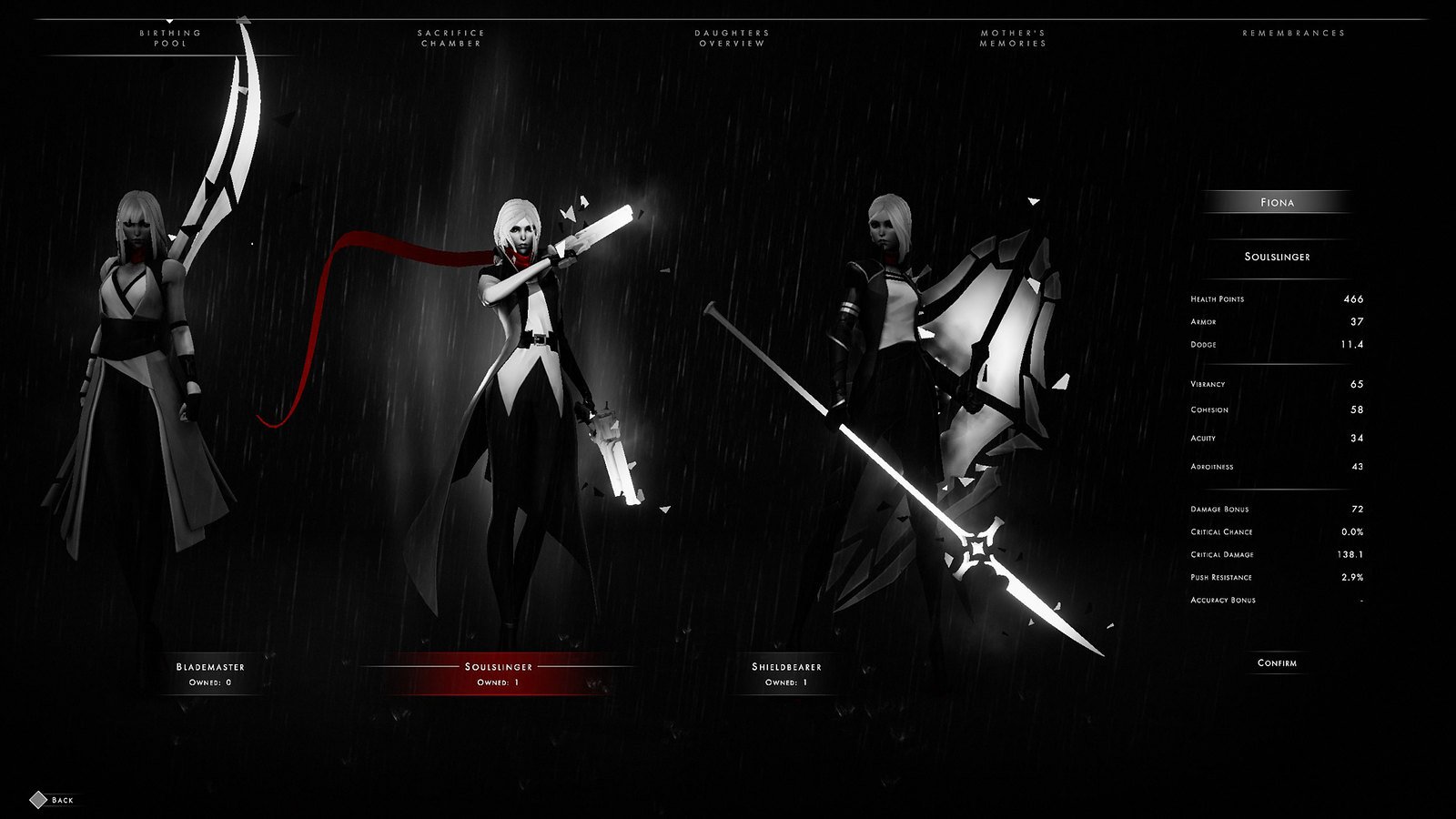 There are a dozen ways to handle almost any situation in Othercide, from how to customize a daughter to the correct way to play a fight to which Remembrance buffs to take for a run. You will be forced to change strategy depending on era, boss, enemies, the daughters you’ve developed, and what your goals are. Write nothing off and make every choice carefully — it may be her last. 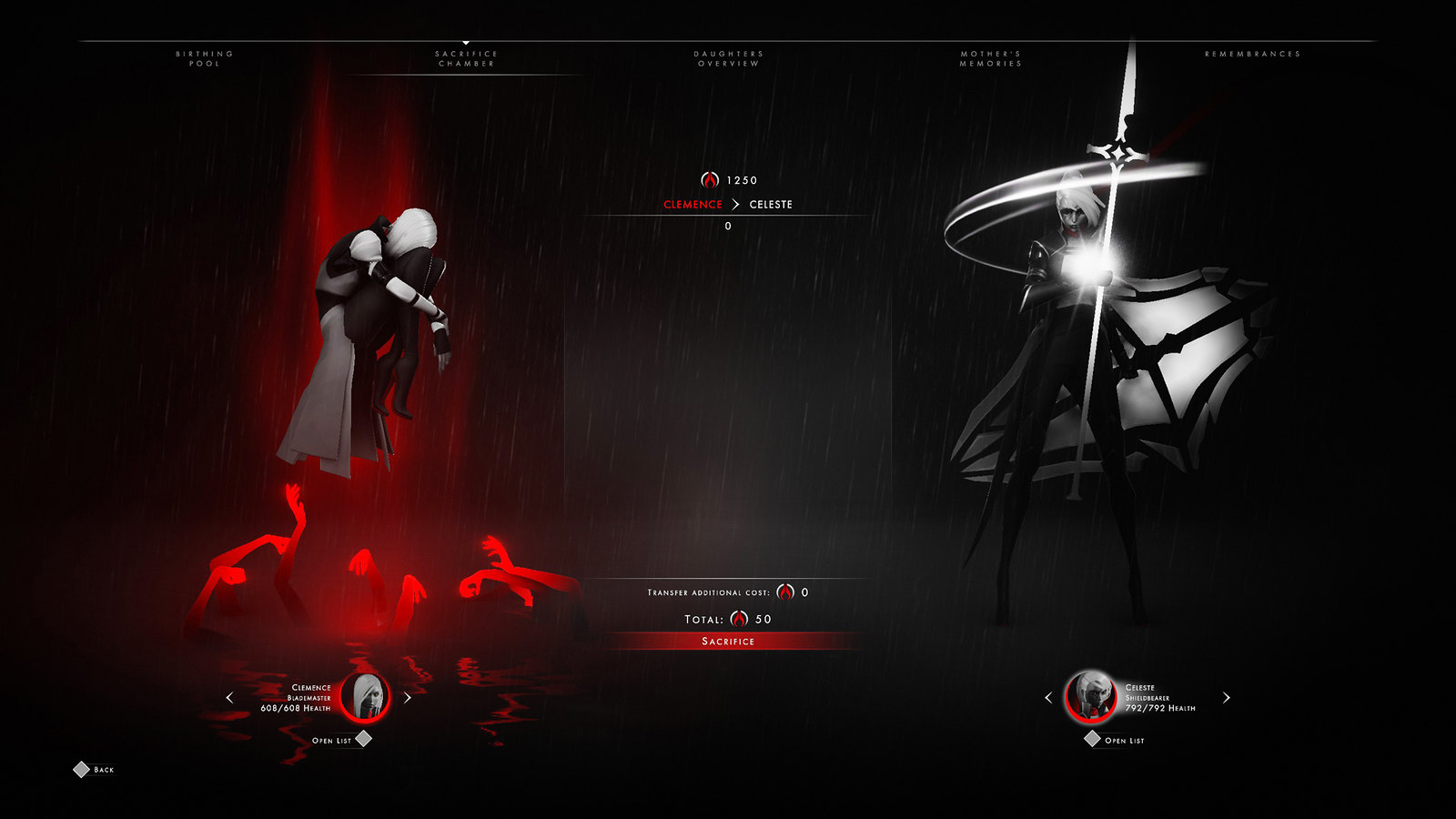 In Othercide, the only way to heal a Daughter is to sacrifice another. It may cost you, but healing is important. One sacrificed daughter is better than three dead ones. This is the only way to complete your fight against Suffering. It also transfers a new trait to the healed daughter, giving her a large boost and likely turning her into one of your premier fighters. What will you do to protect her now?

Who you heal and who you condemn to the abyss will not only affect who you have access to, but change the traits of those that survive. This allows for further customization and can make the difference between victory and defeat. Try not to take unnecessary hits — Othercide is brutal and unforgiving, so you must strike first and be decisive.

There’s much, much more to discover in Othercide when it launches on July 28 on PS4! We, and Suffering, look forward to seeing you then.