Rise of the Tomb Raider: 20 Year Celebration, NBA 2K20, and Erica are your games this month.

Hi everyone! Wow, it’s been 10 years since PlayStation Plus was first introduced to the world on June 29, 2010, and we truly want to thank all of you for supporting PS Plus over the past decade. It’s been a memorable journey over the years, bringing gamers together and providing access to compelling content and exclusive discounts for our members. We wouldn’t be here without all of you, so as a thank you, we wanted to make this upcoming monthly games announcement extra special by adding a bonus game to our incredible lineup.

Here are the games for PS Plus members, available July 7 until August 3.

NBA 2K has evolved into much more than a basketball simulation. With its immersive open-world Neighborhood, NBA 2K20 is a platform for gamers and ballers to come together* and create what’s next in basketball culture. Take your skills to the next level, featuring an upgraded motion engine with signature styles, advanced shooting controls, a new dribble size-up system, refined off-ball collisions, and a new read & react defensive game.

In Rise of the Tomb Raider, Lara uncovers an ancient mystery that places her in the crosshairs of a ruthless organization known as Trinity. As she races to find a powerful and sought-after artifact before Trinity, the trail leads to a myth about the Lost City of Kitezh. Lara knows she must reach the Lost City and its hidden secrets before Trinity as she sets out for Siberia on a thrilling expedition.

This feature-length cinematic experience merges high-fidelity Hollywood production values with engaging, tactile gameplay. Become Erica, a brave young lady plagued with nightmares of your father’s murder. With the traumatic events that have haunted you as a child dragged back into the light of the present-day vis grisly new clues, it’s up to you to unearth the shocking truth behind this devastating tragedy. Every choice you make influences how the game develops, with multiple endings awaiting you at the finale of the emotional branching narrative.

We’ll be releasing a free PS4 theme later this week to celebrate 10 years of PS Plus. The theme will be available on PS Store for a limited time, so be on the lookout. For those of you who haven’t tried the online multiplayer benefit for PS Plus, we’ll also be hosting a free online multiplayer weekend starting July 4 at 12:01AM through July 5 at 11:59PM in your local time. (Online multiplayer game sold separately. Requires internet connection and PlayStation Network account.)

It’s great to see how much PS Plus has grown over the years – starting with the very first PS Plus game offered, WipeOut HD, to offering more than one thousand games to PS Plus members over the last ten years. As we walk down memory lane, we’ll leave you with a quick snapshot of PS Plus from this past decade.  Thank you again for your continued support and we look forward to celebrating with you! 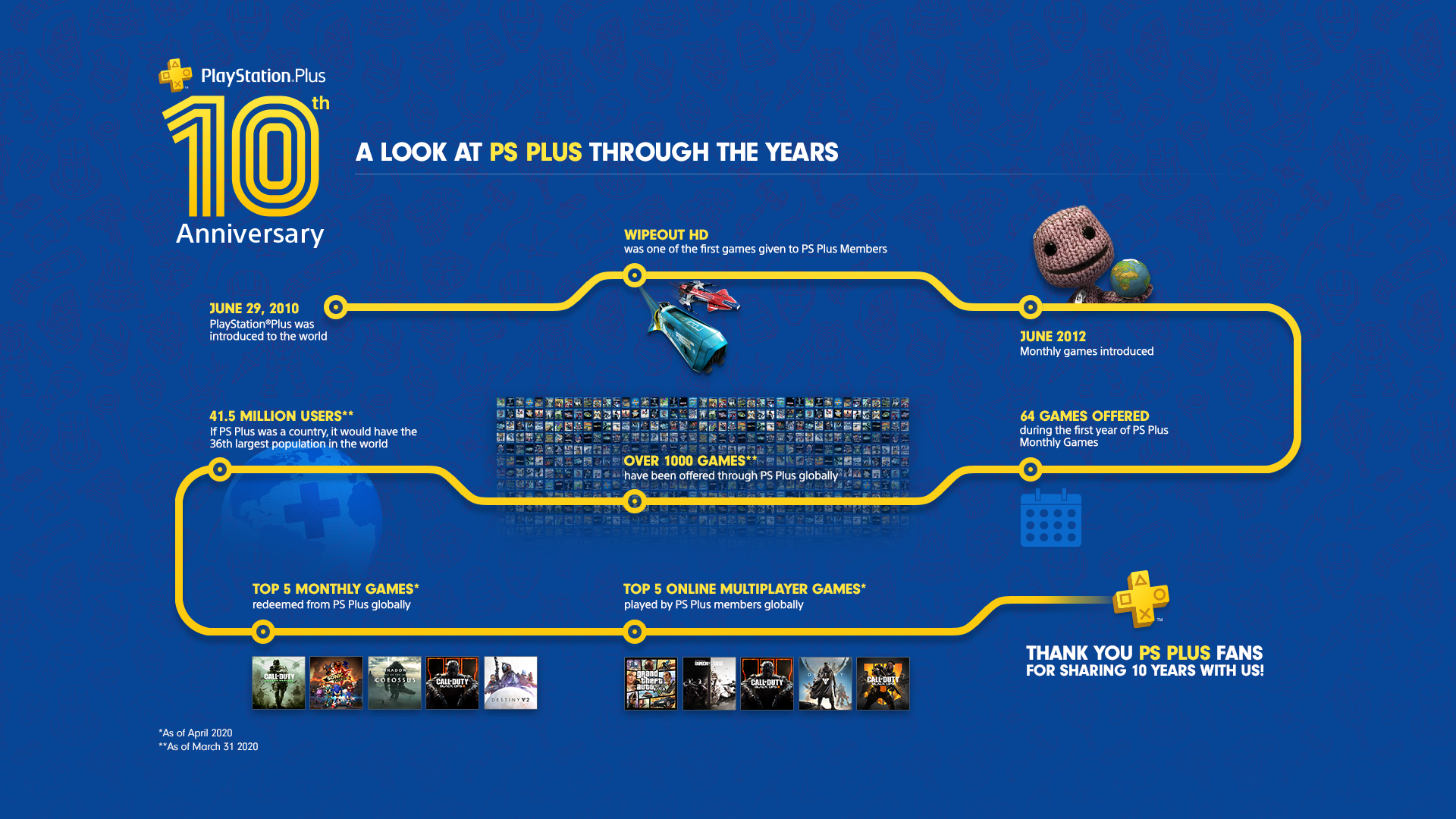 *Internet connection and PlayStation Plus membership required for online multiplayer.