Our goal with Ghost of Tsushima has always been to capture the heart of the samurai fantasy — to transport you back to feudal Japan, to live through the beauty and danger of Tsushima Island under attack. Our hero, Jin Sakai, has trained his whole life in the samurai way — watchful, precise, disciplined, deadly. He’s a master of the katana, a confident horseman, and skilled with the bow… but those skills aren’t enough when faced with thousands of Mongol invaders. He needs to be something more than the perfect samurai if he wants to save his home. That’s what Ghost is about.

Our hopes of achieving our goal, of creating the time machine we were after, rested on capturing the right feel for the katana. Without katana combat that looked right, sounded right, and felt right, Ghost wouldn’t succeed. We could look for inspiration in the great combat examples in classic and modern samurai movies — my personal touchstone is the 2010 remake of 13 Assassins — but the things that work in movies don’t always work in games, so there was work to do.

In the end, we ended focusing on three things: speed, sharpness, and precision.

First, speed. We wanted your attacks to be fast. Katanas aren’t heavy — roughly two to three pounds — so quick slashing attacks are at the center of most katana fighting styles. All the attacks in the game are captured on our in-house motion capture stage, so they represent realistic movement speeds. Those realistic speeds created an interesting problem — they were too fast to react to.

Human reaction times are slower than you think — it takes about 0.3 seconds to respond to a visual stimulus, no matter how simple the stimulus and response are. That’s just how long the nervous system and your brain take to figure things out. This time doesn’t vary much from person to person — we’ve done lots of internal tests, and everyone’s pure reaction times are about the same.

A lot of the design work we did on katana combat was dancing around these limits. There’s no problem with your attacks being fast, of course — the NPCs can react instantly if we want them too. We actually ran some experiments with NPCs having more realistic reaction times and it looked totally wrong. That’s probably because our ideas about how a sword fight looks are driven by watching movies, not real sword fights, and in a movie everyone knows the choreography ahead of time. (We actually watched real sword fights with blunted weapons during development, and they’re way sloppier than we wanted the game to be.)

So your attacks can be arbitrarily fast, but Mongol attacks can’t be faster than the player can react. That created imbalance early on — just hammering on the quick attack button defeated most enemies, which was certainly not the deep combat experience we were aiming for. It would have been nice to have solved this before Hideo Kojima visited Sucker Punch and tried Ghost combat, since that was the first thing he tried. Sigh.

We changed a couple of things to fix this. First, we realized that while there’s a limit to how fast players can react, there’s no limit to how fast they can anticipate. If an enemy launches into an attack string, we need to give the player enough time to react to the first attack in the string, but since subsequent attacks can be anticipated, they can happen arbitrarily fast. One of our Mongols uses a five-hit combo, for instance; the first attack is slow enough to react to, but the others happen fast.

We also realized that we could overlap enemy attacks. While one enemy attacks, another enemy can be winding up. We tune things so that Jin has barely enough time to deal with each enemy attack as it lands, just like in the samurai movies that inspired us, but there will often be two or even three attackers in the middle of an attack sequence at once.

That combination — really fast player attacks, overlapping enemy attacks — created the intensity we were after, the sort of intensity we saw in 13 Assassins. No enemies standing around waiting to be attacked, just unrelenting aggression. That’s great, because we wanted players to be just a little bit nervous about jumping into a fight. Ideally, players leave fights a little bit exhilarated, because that’s how Jin feels. Barely in control, barely alive, but moving forward nonetheless.

The second big focus area for us was sharpness. “Respect the katana” was one of our mantras during development — Jin’s family katana, the Sakai Storm, is a meter of razor-edged steel, wielded with malice, and we needed to respect that. In the samurai films that inspired us, a handful of cuts is enough to fell the toughest enemy. We couldn’t stray too far from that — and when we experimented with letting enemies absorb more damage, when they could take too many hits before falling, the sword no longer felt sharp.

Obviously, that would create imbalance if Jin wasn’t subject to the same rules. The Mongols keep their weapons just as sharp, and Jin can’t ignore cuts any easier than the Mongols can. That helps balance things. The speed and intensity of combat help, too — Jin spends as much time defending as he does attacking, and that slows down how quickly he can ladle out damage. And late in development we had success building in more defensive tactics for the Mongols — blocking, parrying, dodging — which sidestepped the damage problem.

Sharp weapons and aggressive enemies mean that death is always nearby. That sense of danger, that you’re never more than a few mistakes away from dying, is crucial to Ghost of Tsushima’s tone. Players have plenty of techniques to defend themselves, and even more ways to attack. If you concentrate, if you stay focused, you’ll survive the fight. If you lose focus, you’ll die. We’re trying to put you in Jin Sakai’s footsteps; those are the rules he is forced to live by, and they apply equally to you. 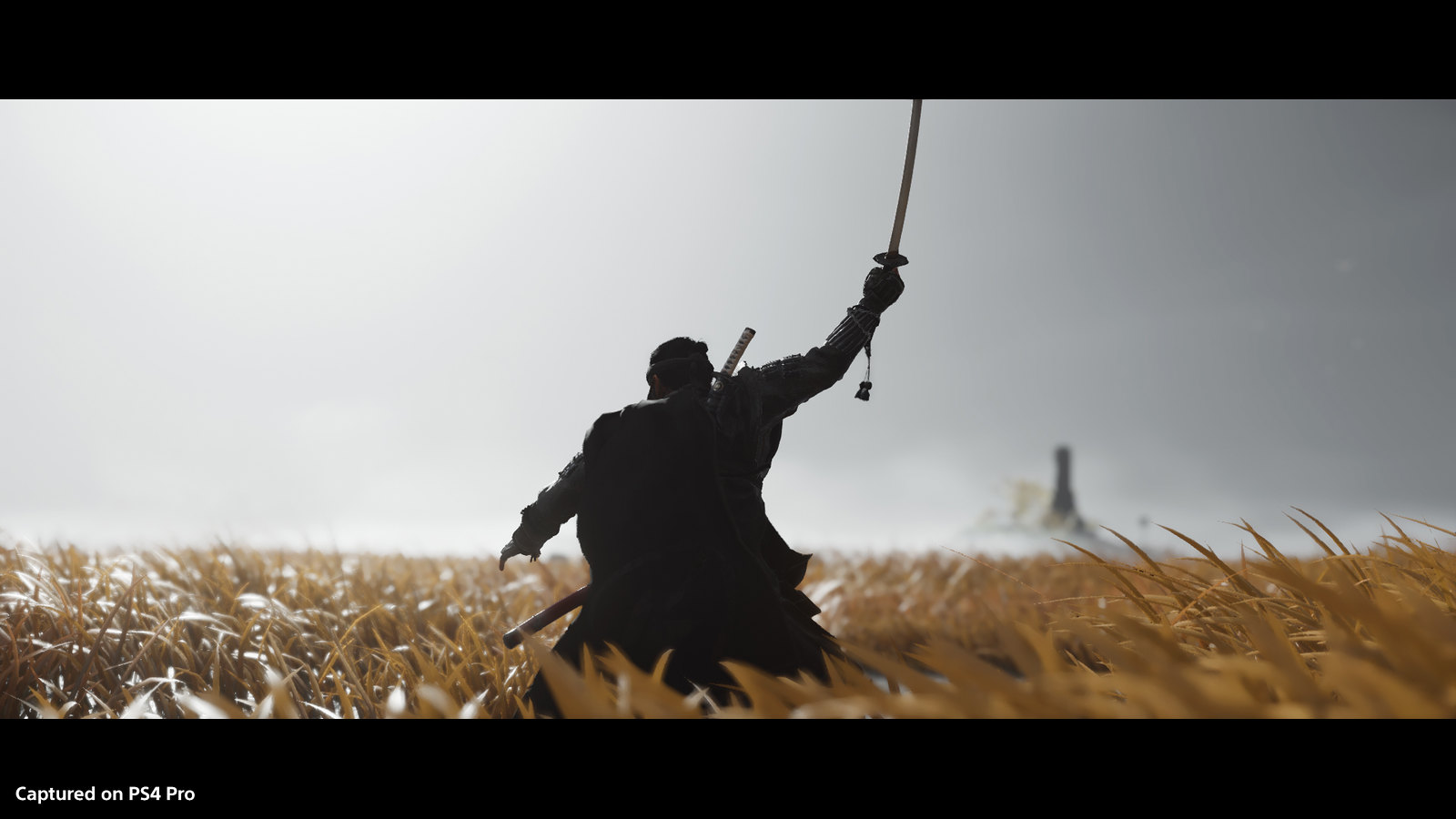 That starts with responsiveness, making sure that Jin reacts instantly to the player’s input. Quick attacks happen quick. We work hard to make our animations fluid, to flow naturally between movements — but if forced to make a choice, responsiveness wins out over physical accuracy.  Jin does have slower, more powerful attacks, but they can be instantly cancelled at any point, leaving Jin free to respond to unexpected events, like the shout of a Mongol charging in to attack. Starting a high-level attack only to cancel it when circumstances change is an important part of high-level play. 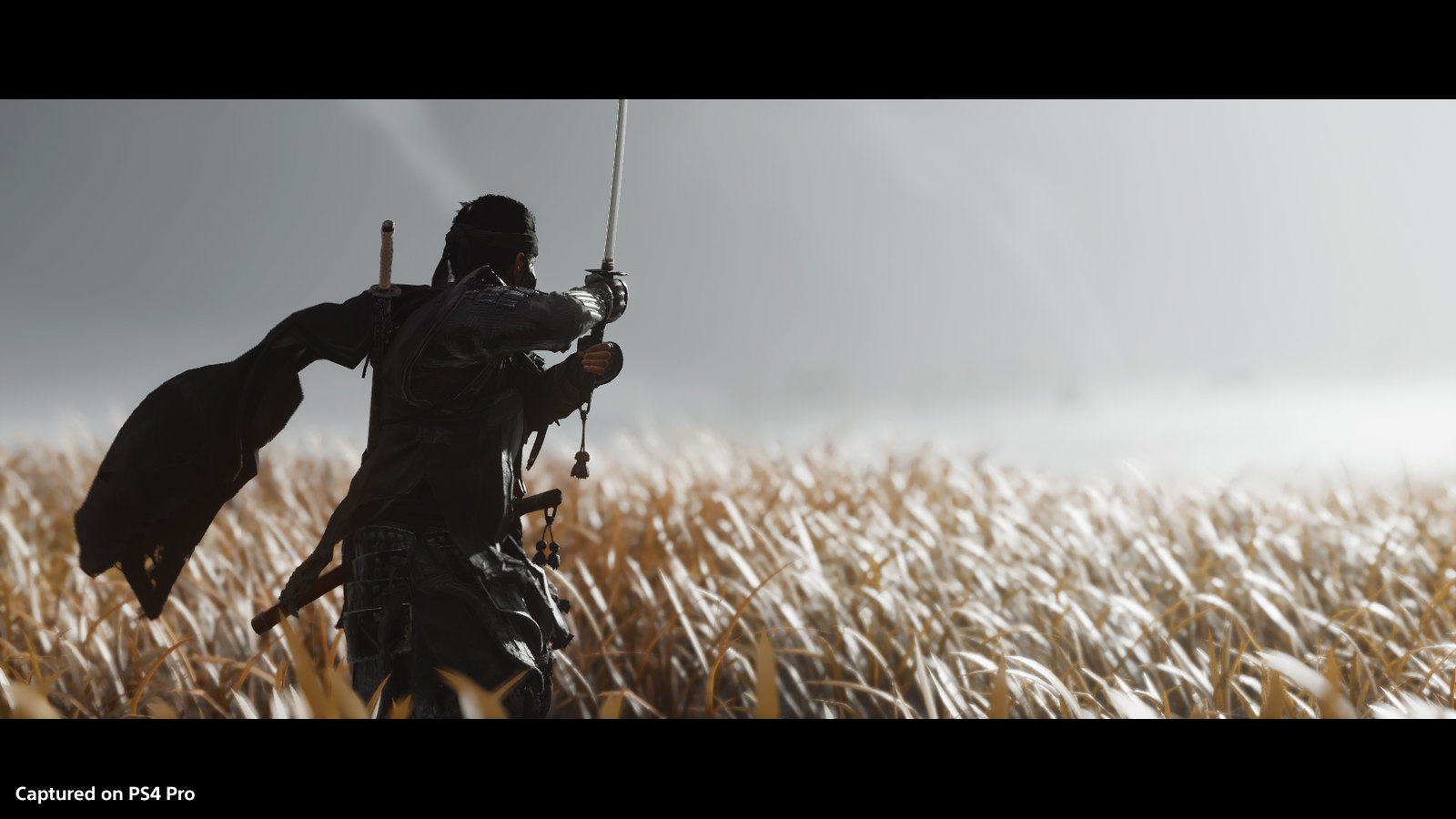 We also wanted to reward the player for precise execution of Jin’s abilities. Take Jin’s ability to block most incoming attacks. Basic execution of blocking is simple — hold L1, block the attack. But there are levels beyond that. Waiting to press L1 until the attack is about to hit changes the block into a parry. The attacker isn’t just stymied, he’s spun past you, vulnerable to a counter-attack. And Jin earns a little bit of Resolve, Ghost’s measure of the samurai spirit that lets him push through the pain and injury he sustains. With the right upgrade, a third level of success opens up — press L1 just as the attack is landing, and the parry becomes a perfect parry, stunning the attacker and leaving him open to special, devastating counter-attack, and earning Jin a big dose of Resolve. 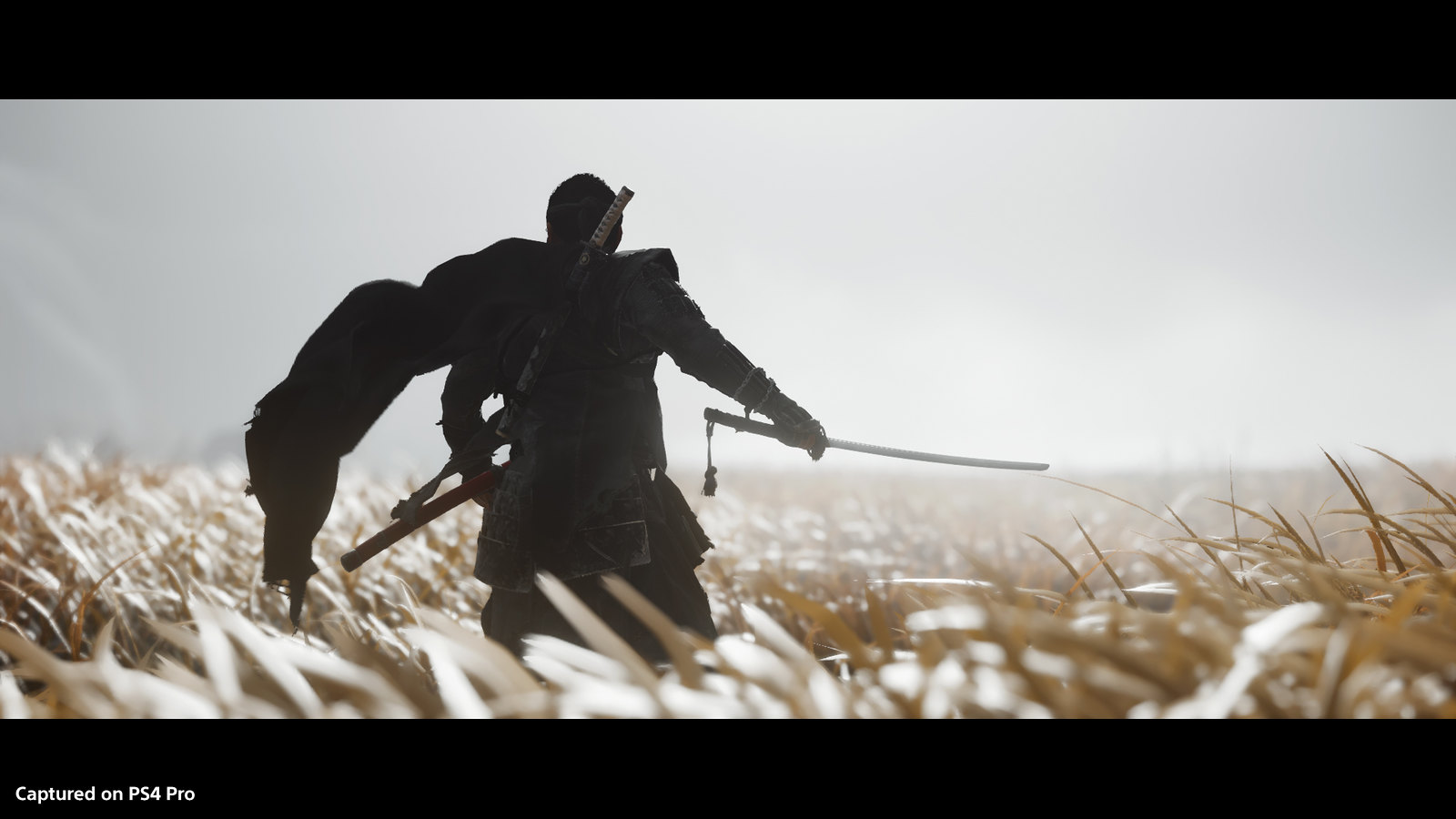 That precision carries over to the player’s decision-making. Jin can attack his enemies in dozens of ways, but choosing exactly the right attack at the right moment is crucial. Jin is forced to evolve beyond the lessons he was taught, to incorporate what he learns from closely observing and fighting the Mongols. These lessons are distilled into new Stances, collections of new attack techniques, which the player can switch between at any point. Each Stance is designed to be particularly effective against a subset of the dozens of enemy types Jin faces; switching between Stances based on who Jin faces amplifies his deadliness. 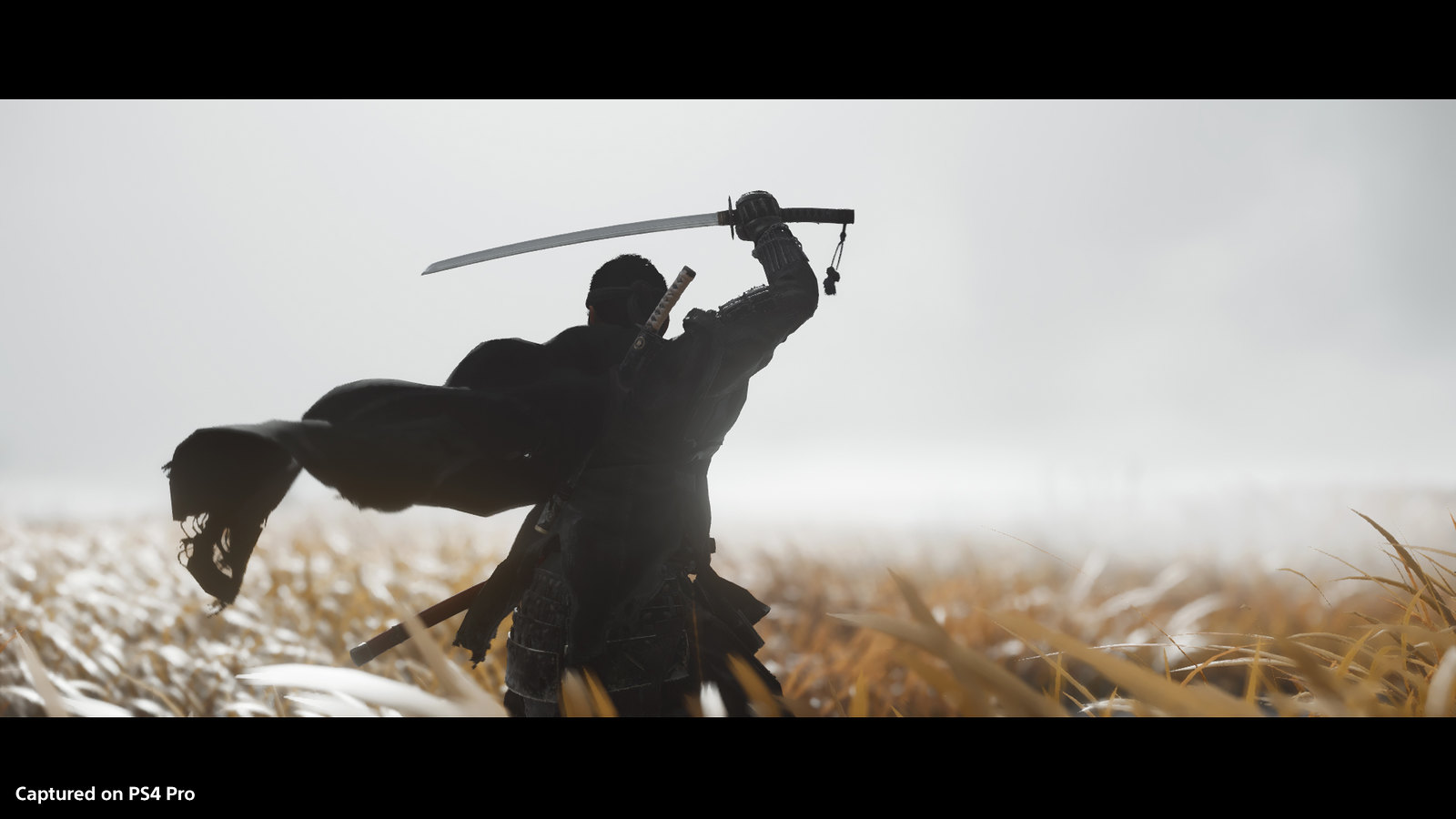 Here’s a video clip that shows the player switching stances as they move between enemies. Jin uses Stone Stance to quickly finish off a swordsman — Stone Stance is his ancestral style, developed to fight other swordsmen, so it works well against Mongol swordsmen — then quickly switches to Water Stance to create an opening against a shieldman. Jin devises Water Stance in frustration after the techniques he’s practiced for decades prove ineffective against the Mongol shieldmen.

All of these things — speed, sharpness, precision — combine to produce an experience we think players will love. More precision means a more effective player, which means things can go faster and get more deadly to match. We hope you’ll choose a difficulty level that really challenges you as a player — because the focus and discipline and practice it will take to meet that challenge is exactly what is demanded of Jin Sakai.