Night School Studio shares an introspective look at the relationships you'll build as you attempt to escape the underworld.

Editor’s Note: Hello, everyone, Shuhei Yoshida here. Today, we’re kicking off a series of stories written by independent developers whose games address interesting, unique, or thought-provoking issues. We’re starting with a story about making connections with other people in Night School Studio’s Afterparty, authored by the game’s lead writer & director. Stay tuned, as we’ll be publishing more of these stories over the next few weeks.

We wanted to make a game in a bar.

That was the initial idea. Just to make a game in a bar. The single location would be easier on production than a concept that required multiple areas, and the cultural ubiquity of drinking establishments means it would be simple to understand and relate to. But the main reason we were attracted to the idea of a game set entirely in a bar was the wide cast of characters it afforded us. Bars are like hospitals or courthouses or schools. Most everyone, at some point in their life, will be in one. And like hospitals, courthouses and schools, they’re old. There are bars on this planet that are literally older than the dirt surrounding them. Bars are universal, and have been drunken amplifiers for human connection for almost as long as there have been humans. And that’s really what Afterparty is about. Meaningful connections, and why they’re so hard to make and maintain. 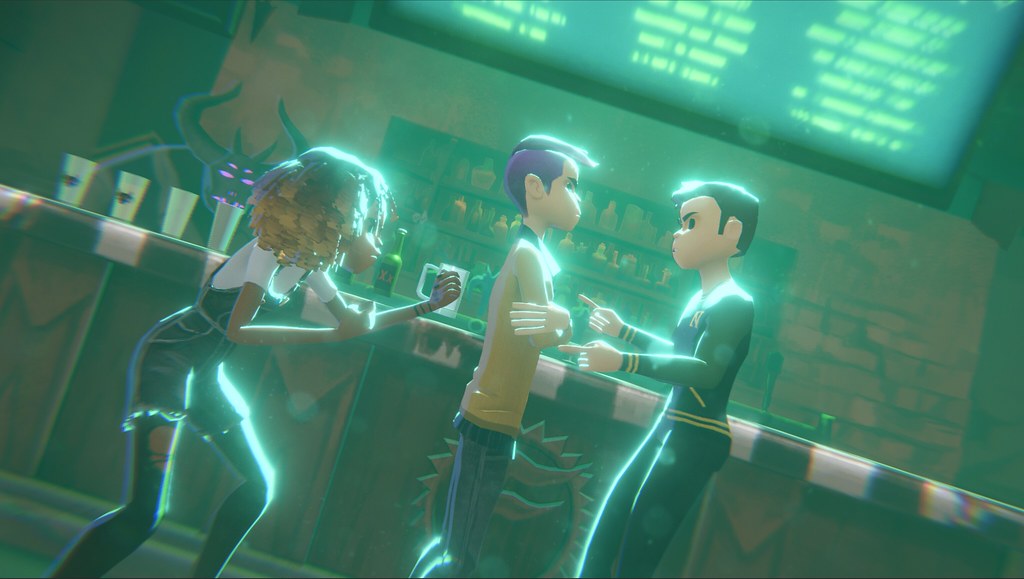 Well, to be clear: Afterparty is a game about two dead friends named Milo and Lola. You see, they’ve unfortunately and unexpectedly slipped from this mortal realm just when they were about to graduate college, and now find themselves trapped in Hell. Bummer. However! They quickly discover a loophole in the cosmic ruleset that will allow them to escape if they successfully find Satan and outdrink the dark angel in a series of party games. It’s a narrative-driven, puzzle-adventure game so there’s some twists and turns along the way, of course, but that’s essentially the goal. Escape Hell.

One challenge of Milo and Lola’s underworld adventure is they need to make friends to achieve that goal, and that’s where the whole “meaningful connection” part comes in. The Hell of Afterparty is a sprawling metropolis split amongst islands on the fiery River Styx, each hub of which is filled with demons and souls all vying for your drinks and attention. It was important for us at Night School to tell a story that makes you feel the stress, the humor, the joys, the disappointments of meeting people in a frantically social setting in a brand new, intimidating environment, and being forced to navigate the relationships that can bubble up from those encounters. 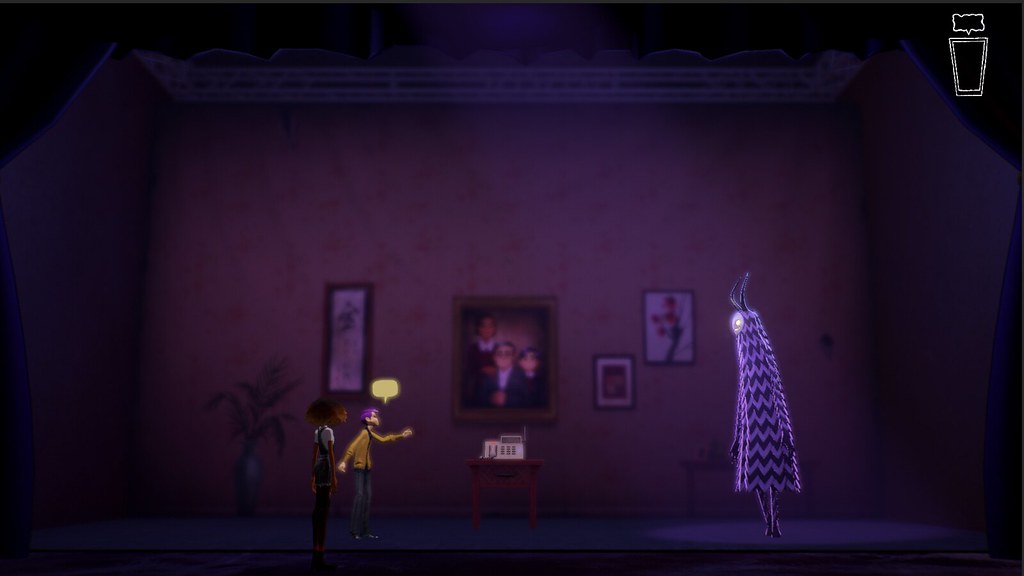 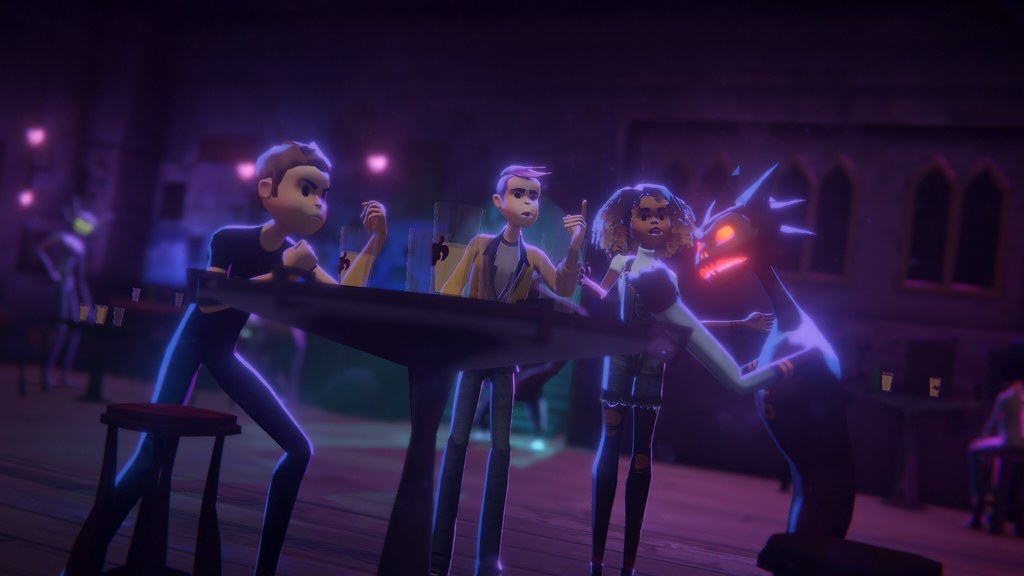 We tried to accomplish this in a couple of ways. One was making the very act of drinking a fun, interesting gameplay mechanic that could cartoonishly mirror what an actual night out with strangers is like. For a lot of us, talking to someone, striking up a conversation, or trying to make a friend can all feel like challenges to be overcome, or even just survived. It especially feels that way to Milo and Lola, two young 20-somethings who have never been comfortable making new friends. But there’s a reason drinking has been a social lubricant for eons: it diminishes your ability to feel awkward. In a game, however, it’s hard to translate that. Only the most sensitive players would be so nervous interacting with computer-driven actors that they’d truly feel the need to have a virtual drink to calm their virtual nerves, so we needed drinking to be much more valuable than that.

Thankfully, drinking alcohol is a choice that has many smaller choices tucked inside. In real life, knowing yourself, your company and your own drunken limits, you might avoid a specific cocktail if you don’t want to get too aggressively flirty, or you might down three shots to calm your shaking nerves. So the drinks in Afterparty drastically change Milo and Lola’s personalities to fit the ridiculousness of their situation. For example, one makes you talk like a cliched 20’s mobster until the effect wears off. Another causes your conscience to spill out of your body, turning your every thought and utterance into the ruminations of a self-absorbed creep. All of this is in service of letting the player “win” these social interactions — to feel like you’re speaking to the wild and wooly demons and dead souls in a language and style they would appreciate.

Now, you could say that there’s a certain callousness to this approach. How can you make a meaningful connection to somebody if you’re trying to constantly “game” the interaction, by playing into what you may think they want to hear? So it was necessary to make every character you talk to and “party” with in Afterparty feel real, and special, and have them react to what you say and do as honestly as they can. Talking to someone shouldn’t ever feel like you’re just finding the right keys for the right locks. Yes, you have your Big Goal™ — getting out of Hell — that you’re working towards, and all the minor goals and obstacles clogging your way, but that doesn’t mean conversations shouldn’t be as fun and unpredictable and stress-inducing and elating as a real, glancing encounter with someone new over beer pong. Achieving this means making sure the characters you meet have their own goals, their own fears, their own hangups and pet peeves. And making sure they remember how you treat them during the night.

As Sartre cheerfully pointed out, “Hell is other people,” denoting the pervasive, existential discomfort of being “known” by another person. When you see yourself as other people really see you, it can be an awful experience. Milo and Lola’s “Personal Demon” Sister Mary Wormhorn was the mechanical way of expressing this idea. She pops in and out of the story at the most inopportune times, taunting every decision you’ve made up until that point, bringing up ad nauseum the immense futility of trying to escape the afterlife. She brings up the fact that you’re sitting somewhere, probably alone, playing a video game, instead of actually going out into the world to meet people (something that’s a bit of an impossibility now). She’s a terror, and there only to get in your way. But she’s a “person,” too, in the end, with her own struggles and desires. So we hope Afterparty leaves players with at least the tiniest of comforts: everyone really is just like everybody else.