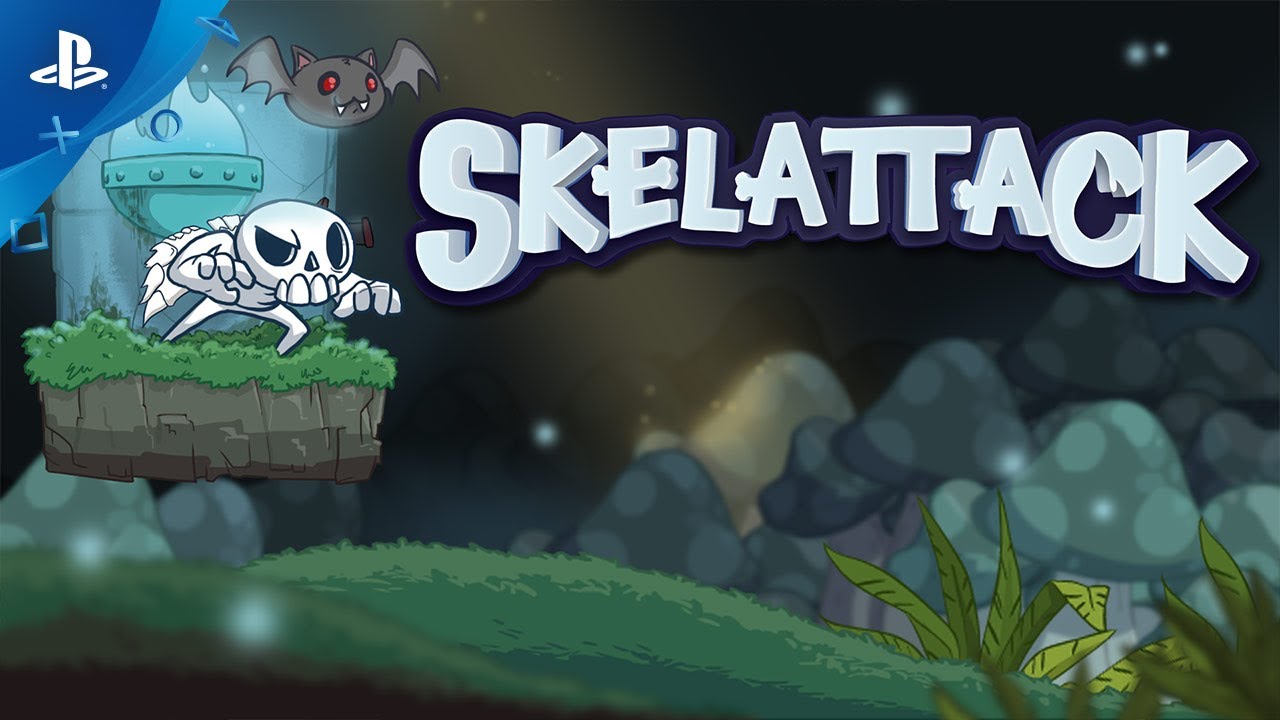 Ukuza partners with Konami to create a new hand-drawn side-scroller.

Raiding dungeons for riches and glory has always motivated adventurers as they slashed down skeletons, monsters, and magical creatures. Kill the monsters, get the bounty, and become lauded across the land. Easy right? But has anyone asked the monsters how they feel? In Konami and Ukuza’s newest title, Skelattack, we flip the genre on its head as a reverse dungeon crawler where you play as that skeleton NPC you are used to slashing down as an adventurer.

Play two characters in the bustling underworld of Aftervale: Skully, an enchanted skeleton, as well as his feisty bat companion Imber. As Skully prepares for his Remembrance to come to terms with who he was in his past life, Aftervale is raided by humans and the elder is kidnapped. Throughout the adventure, players will jump, flap, and slash their way through the underworld to save their neighbors and eliminate the humans.

As a team, we always felt an immediate connection to Skully and Imber. They are best pals that exchange bad jokes as they traverse Aftervale. Aftervale itself is a magical bustling hub in the deepest part of the dungeon inspired by the likes of The Nightmare Before Christmas. Tim Burton was a big inspiration for our team to turn the ghoulish creatures of Aftervale into lovable characters that you’d be happy to call your dungeon neighbors.

Our hand-drawn art style and quirky dialogue helps build the richness of the game even further. As a bag-o-bones, players find Skully’s charm in his cute styling, friendship with Imber, and journey of self-discovery as he sets out to help his friends and neighbors. While players get their fix of fun platforming and unique mechanics in this metroidvania, the story provides a rich backdrop of discovery, doubt, friendship, and peril.

While the dungeon dwellers are quirky, humans aren’t known to send shivers down your spine. But push their personalities past their limits and we get something quite ridiculous. We took inspiration from movies like Monty Python and the Holy Grail and made the humans over-the-top parodies of themselves with the warrior, bard, assassin, paladin, and more. This played out extremely well with quirky dialogue and humans that puff up their chest to lay claim to your dungeon dwellings. By the end of the game you are rooting for the dungeon denizens and demolishing the humans with some extremely skillful abilities.

Skelattack is unique in the fact that there are no game overs and players respawn instantly at Blue Flame checkpoints, where they can jump right back into the fight after using up all of their life. This mechanic ended up exploding into a rich story where the mysterious Blue Flame allows the undead to live forever. Don’t just take that death on the chin. Pick up your sword and keep swinging instantly!

As a metroidvania, expect to run, jump, and wall jump to make your way upward through the realms of the underworld. New challenges await in every corner. Hazards and unlockable abilities allow for varied gameplay styles. Traverse the watery depths of The Sewers, the lush forests of The Greenery, the molten rock of The Lava Forge, the torturous Prison, the haunted Crypts, and the high-class ruins of The Grand Halls. As Skully progresses upward in the dungeon, he begins to sense the growing human presence within his home.

As Aftervale and the realms are filled with magic, Ukuza didn’t want a run of the mill brick dungeon. The art direction was important to give variety to the characters and the levels. Our team’s hand-drawn assets go from pencil sketch to digital sprite, providing us with a classic ‘Saturday morning cartoon’ look with crisp frame-by-frame animation. When designing the game, we felt pixel art was everywhere and 2.5D loses some of the charm of classic retro games and cartoons. Hand-drawn assets allowed us to give a unique look to Skelattack along with layering, lighting, and particle effects.

The overall design aesthetic evolved from a test project into a very rich world with rich characters, environments, and props. Skully originally came to life through various napkin-style sketches where he went from a lone skeleton to being a duo with Imber, ready to take on an epic adventure.

Ukuza is very excited to share the world and story of Skelattack with you. We are extremely grateful to partner with Konami where classics like Castlevania, Contra, Goemon, and Metal Gear were brought to life. Together we’ve been able to harp back to that golden age of 2D games with the quirky, fun, and hand-drawn world of Skelattack, now on PlayStation Store.