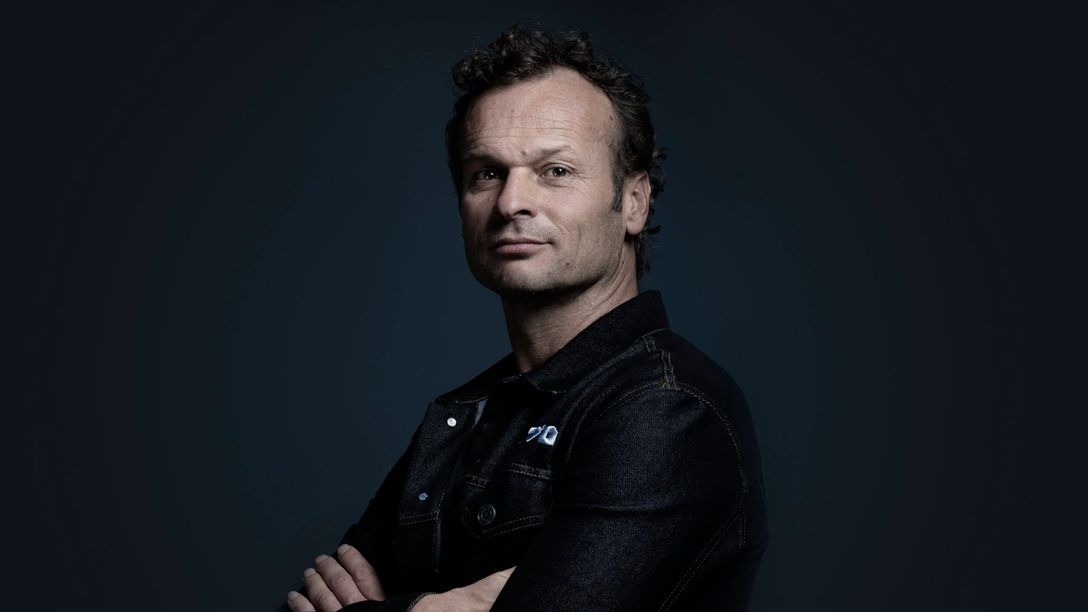 What's next for Guerrilla, upcoming TV and film projects, and the guiding principles that drive PlayStation’s network of world-class game studios.

Just a few days ago, I caught up with Hermen Hulst, formerly the managing director of Guerrilla. In his first interview since becoming Head of Worldwide Studios, Hulst provides insight into his new role overseeing PlayStation’s international network of game developers and creators.

Our talk covers a lot of ground: from upcoming film and TV projects based on Uncharted and The Last of Us, to the upcoming PC port of Horizon: Zero Dawn, to what’s next for PlayStation’s international network of game studios.

Listen to our full interview here, or read on for some key excerpts, edited for brevity and clarity.

PlayStation.Blog: For years, you’ve been the head at Guerrilla, the studio behind Horizon Zero Dawn and the Killzone series. What have you been up to lately?
Hermen Hulst: First off, just let me say that it’s a great honor for me to lead such an incredibly talented team. Since I’ve been appointed as the Head of Worldwide Studios I’ve been spending some time at various studios, going around listening to teams. Obviously I knew a lot of people already [from my time at Guerrilla], but I’ve met a ton of new devs. And I’ve been trying to get a better understanding of how we can work even more closely than we already do.

I’m obviously involved in projects that I wasn’t before. I’m really pleased to see how well fans and press are responding to Dreams. It’s such an ambitious game.

PSB: There are PlayStation fans out there who have heard of Worldwide Studios, but they don’t know exactly what it is… How would you describe Worldwide Studios?
HH: I think I would define Worldwide Studios as probably the most global network of game creators that exists, or has ever existed. I mean, we’ve got studios across the world from Sucker Punch in Seattle to Media Molecule in Guildford to Polyphony Digital in Tokyo. It’s truly global.

And pretty much all of these teams started as independents. Typically they have their own identity, their own name, their own studio culture. But at the same time, they’re all very much part of this global network that is Worldwide Studios. So there you have it, in a nutshell.

PSB: Since you’ve come on board, have there been any changes at Worldwide Studios?
HH: I think Worldwide Studios is in a really good spot. We have been, and we are still, very much a quality-oriented group of developers. We’re storytellers, and we like to create new experiences.

We’ve had a couple really great appointments of new leaders at the studios recently. You probably heard about Nicolas Doucet as the new head of Japan Studio… Alan Becker, who I’ve worked with for many, many years recently retired from Sony Interactive Entertainment. So Nick is a great appointment, he’s been creating innovative showcases for PlayStation since his early days at London Studios. He worked on EyeToy… he’s one of those guys who can tinker with hardware and bring innovation to the platform.

And Yumi Yang has been appointed as the new head of Santa Monica Studio. You know Yumi Yang, she’s been there from the beginning. She knows the people… she’s been such a vital part of establishing all these processes that have generated 20 years of great games coming out of Santa Monica.

She’s one of those people that gets creative talent. And I think the creatives love working for her because of that.

Actually, while we’re talking about Santa Monica Studio, I’d like to give a shoutout to Shannon Studstill, whom I’ve partnered with for many, many years. I’m really grateful for her, she left recently. And with her special brand of leadership fostering talent, she’s been so great at succession planning. And that’s exactly why we have Yumi there now, all set up.

PSB: From your perspective, what makes Worldwide Studios special? Can you chalk it up to the structure, people and talent… or is it the freedom that’s provided to these folks?
HH: I think all of those elements are crucial to it. What’s unique about Worldwide Studios is that everyone here loves making games with a lot of heart and soul. It’s never just a job. People at the studios are so connected to the titles that they make.

And I think what’s key here is Sony Interactive Entertainment’s commitment to giving creative teams time to realize their vision. It takes time to create these heartfelt experiences, to create innovative experiences. And Sony really gets that, so I’m very grateful for that.

I should also mention the PlayStation community. I think it’s one of our greatest strengths at Worldwide Studios and PlayStation at large. Increasingly, I see deeper connections between developers and the community.

PSB: You’ve been with the company for a long time, you know what goes into a hardware launch year. A lot of challenges and opportunities that studios face, including Worldwide Studios. What are the teams focused on right now?
HH: You know, these are the most exciting times when you develop on a console. We are super hard at work at the moment… and honestly, I can’t wait to talk to you in more detail about that.

Let me just say — we have some of our biggest exclusives on PlayStation 4, either having recently released like Dreams, or coming out very soon like MLB The Show on March 13 (editors’ note: early access date, with pre-order), The Last of Us Part II on May 29, we’ve got a really great new IP that I’m so psyched about, Ghost of Tsushima. So there’s a lot coming out on PS4 as well.

PSB: Is there anything you can tell us about your vision for the future of Worldwide Studios, whether it’s going into next generation or beyond?
HH: We’re very committed to dedicated hardware, as we were before. We’re gonna continue to do that. And we’re very committed to quality exclusives. And to strong narrative-driven, single-player games.

At the same time, we’re going to be very open to experimentation, to new ideas. Just trying things out to see what works. I think that’s also very much part of the DNA of Worldwide Studios.

PSB: Speaking of experimentation, there have been rumors of a Horizon Zero Dawn complete edition that might be coming to PC… can you confirm or deny that?
HH: Yes, I can confirm that Horizon Zero Dawn is coming to PC this summer…. There will be more information coming from Guerrilla, from the new studio directors [Michiel van der Leeuw, JB van Beek, and Angie Smets] pretty soon.

PSB: PlayStation is no stranger to publishing titles on the PC, but Horizon: Zero Dawn is one of the largest games to make that leap. Is there anything you would say to PlayStation fans? What does it mean for the future?
HH: Sure. I think it’s important that we stay open to new ideas of how to introduce more people to PlayStation, and show people maybe what they’ve been missing out on.

And to maybe put a few minds at ease, releasing one first-party AAA title to PC doesn’t necessarily mean that every game now will come to PC. In my mind, Horizon Zero Dawn was just a great fit in this particular instance. We don’t have plans for day and date [PC releases], and we remain 100% committed to dedicated hardware.

PSB: What do you think of Dreams?
HH: I think what Media Molecule pulled off is just pure wizardry. These guys are empowering players to make and share their own games. If you reflect on that… not only did they create a new engine, and not just an edit suite, but a digital content creation suite on top of it.

I’ve been speaking with a few graphic coders from other teams about Dreams, and it’s hard for them to even get their head around it… [they’re] puzzled about how Media Molecule pulled it off.

PSB: PlayStation Productions is out to expand the reach of PlayStation IP by bringing it to mediums like film and TV. There’s not a lot of info out there — can you tell us about the strategy?
HH: I would say the purpose of creating PlayStation Productions is to introduce our stories, characters, and worlds to new audiences while making content our fans will be proud of. The approach is to bring together film and TV directors, work with people who have a ton of respect and passion for our gaming IP.

We’ve got IP dating back for more than 25 years now, and we’ve been delighted to find quite a few PlayStation fans among these film and TV creators. What I’ve also come to understand is that our IP is perfectly suited to adapt to linear storytelling.

In a film and TV market, where IP and franchises are king, we’ve built up one of the most exciting IP libraries in entertainment…. I should mention that we are including the game makers in this expansion process. We want to ensure that we’re very authentic in that approach.

It’s really important that the game makers are a big part of it. We’re not just creating direct copies of our games, we’re really making an effort to adapt their stories to best fit that medium.

PSB: We know about the Uncharted film. What other projects are underway?
HH: We’re very excited. The Uncharted film starts shooting this month with Columbia Pictures. It’s got a great cast — Tom Holland, Mark Wahlberg, and recently announced Antonio Banderas. It’s going to be a really fun movie, [it] will help reach audiences who maybe haven’t heard of Uncharted before.

A big one recently announced — we’re partnering with HBO on a The Last of Us TV show. We’re so excited to be working with the award-winning team that brought you Chernobyl, with Craig Mazin co-writing the show with our very own Neil Druckmann from Naughty Dog.

There’s a lot more to come on PlayStation Productions, but that’s what I can tell you now.

There’s even more in the full interview! Hulst also shares how he broke into the gaming industry, whether he inverts his Y-axis, and what his 1994-era self would say if he could see 2017’s Horizon: Zero Dawn.