The History of the Future: Delving into the Universe of Outriders 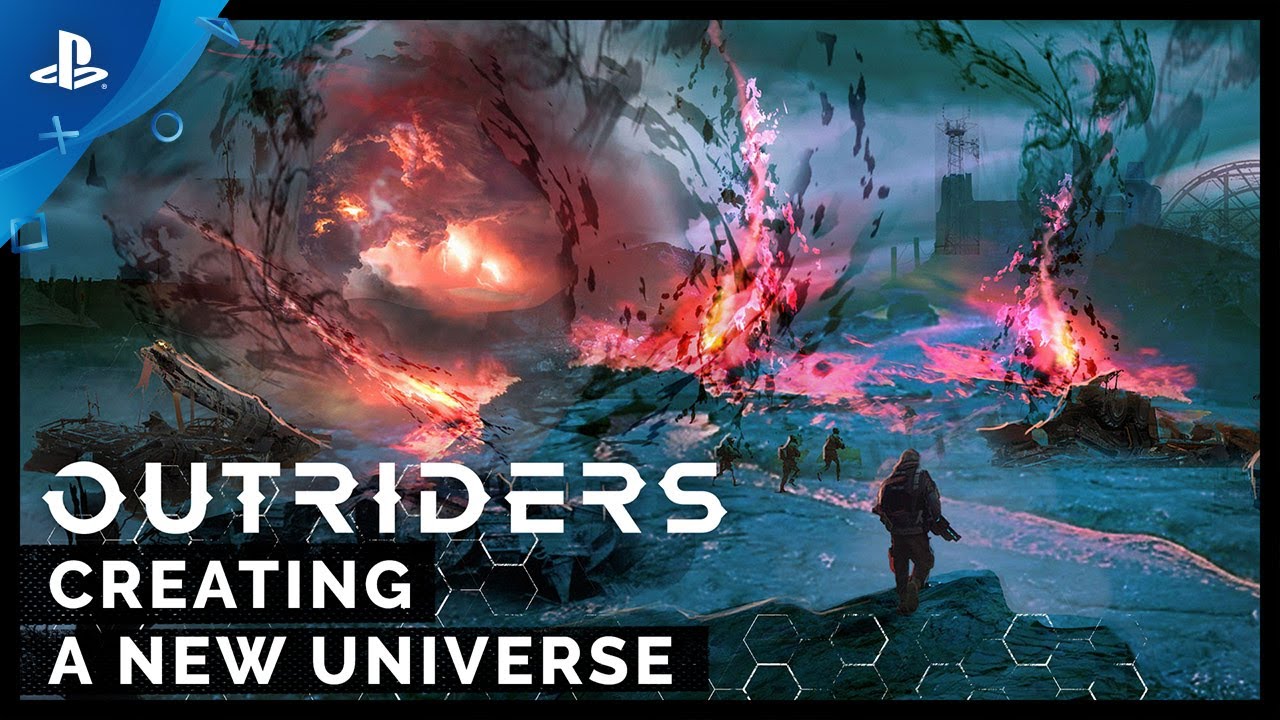 Into the Heart of Darkness

We’ve just wrapped up our Panel at PAX East, where Lead Writer Joshua Rubin and Lead Narrative Designer Szymon Barchan spent some time talking about the work that has gone into creating the universe of Outriders, as well as discussing the space that Outriders intends to carve out for itself in the RPG shooter genre. If you missed the panel, you can watch a VOD of it here, but I also wanted to take the time here at PlayStation.Blog to expand upon some of thematic ideas behind Outriders, which releases Holiday 2020 for PlayStation 5 and PlayStation 4.

If you’d like to find out a bit more about some of the thought processes in the early days of new-universe creation, have a look at the short video above, which also includes some previously unreleased concept art.

One Question that we’ve seen be bounced around a lot is: How does the science fiction setting of Outriders differ from everything else that’s already out there? Simultaneously, I’ve also seen a handful of observers insist that we seem to be “doing sci-fi wrong.” Where are the beam weapons, lasers and shiny suits of armor!?

But that is exactly the heart of the Outriders universe. When People Can Fly first envisioned Outriders and started putting the first pieces of it all together, the idea was to do sci-fi a little differently to the current day trend. One of the game’s basic principles is to meld the science fiction frontier setting of an unexplored, alien planet, with the visceral grittiness of warfare. That being said, buckle up for a moment everyone, we’re about to get a little cerebral.

One of the fundamental aspects of science fiction is the exploration of ideas, particularly with a view towards potential consequences of innovations or changes in science and technology, but also society. These notions all lie at the core of the Outriders universe and narrative.

From day one the team had a strong focus on narrative and story and with Outriders we wanted to craft a science fiction universe which was far more than just window dressing. We want to build lore that has depth and creates discussion and conversation. You may already be familiar with the game’s tagline: “Leave Humanity Behind.” The true meaning behind this phrase contains several different layers that you will encounter and have the chance to mull over in your travels across Enoch. There are other themes worth considering as well and keen observers may draw parallels with aspects of works such as Joseph Conrad’s “Heart of Darkness.” Finally, there are some more overarching themes and metaphors in the Outriders universe that we, for the sake of spoiler avoidance, don’t want to delve into just yet.

The cornerstone of a rich science-fiction world also lies within the effort dedicated to world building. Much of this was already done at the very outset of the Outriders project: People Can Fly wrote almost 200 years worth of “pre-universe lore,” from 2020 through to 2209 — it’s the History of the Future and is enshrined in our game’s design bible. Dozens of pages chart the political and economic landscapes that led to the demise of planet Earth, as well as the work done to save what was left of the human race. All of these events occur before the actual game narrative of Outriders begins. As you progress through the game, you will uncover a treasure trove of lore that will reflect upon this history, all of which you can explore and read at your own pace should you be so inclined.

When humans first land on Enoch, the planet upon which the Outriders game takes place, they encounter a storm henceforth referred to as “the Anomaly.” This storm renders all the high tech equipment of the new arrivals useless, forcing them to fall back upon relying on the most basic of remaining technology and ballistic weaponry. This same set-back also means that colonizing the planet as planned is no longer possible — all the equipment and resources needed for this are still stuck in orbit, waiting for an uplink signal that cannot be sent now that anything more advanced than a two-way radio has been fried. Here’s an excerpt from the Journal that explains the Anomaly a bit more:

Knowing this, and bearing the themes mentioned further above in mind, you may already be able to discern some of the narrative elements that Outriders may touch upon. In particular, how does a generation of humans who have experienced the pinnacle of human advancement on planet Earth fare when thrown into the savagery of a primitive new world? Stripped of everything that gave them an advantage in the old world, how far will they go to maintain, save or sacrifice their humanity? And how does an Outrider who awakens from cryo-sleep 30 years too late find their way in this changed society and deal with the children of Enoch, who have been born into a world of conflict and struggle, and raised on the propaganda of war and hate? What sacrifices will need to be made to give the human race a second chance on Enoch?

We’re looking forward to seeing you delve into the universe People Can Fly created and for you to experience the rich story that they’ve crafted when Outriders releases Holiday 2020 on PlayStation 5 and PlayStation 4. For more information about Outriders, be sure to follow the Outriders social channels!