Building the Magical Underworld of Afterparty, Out October 29 on PS4 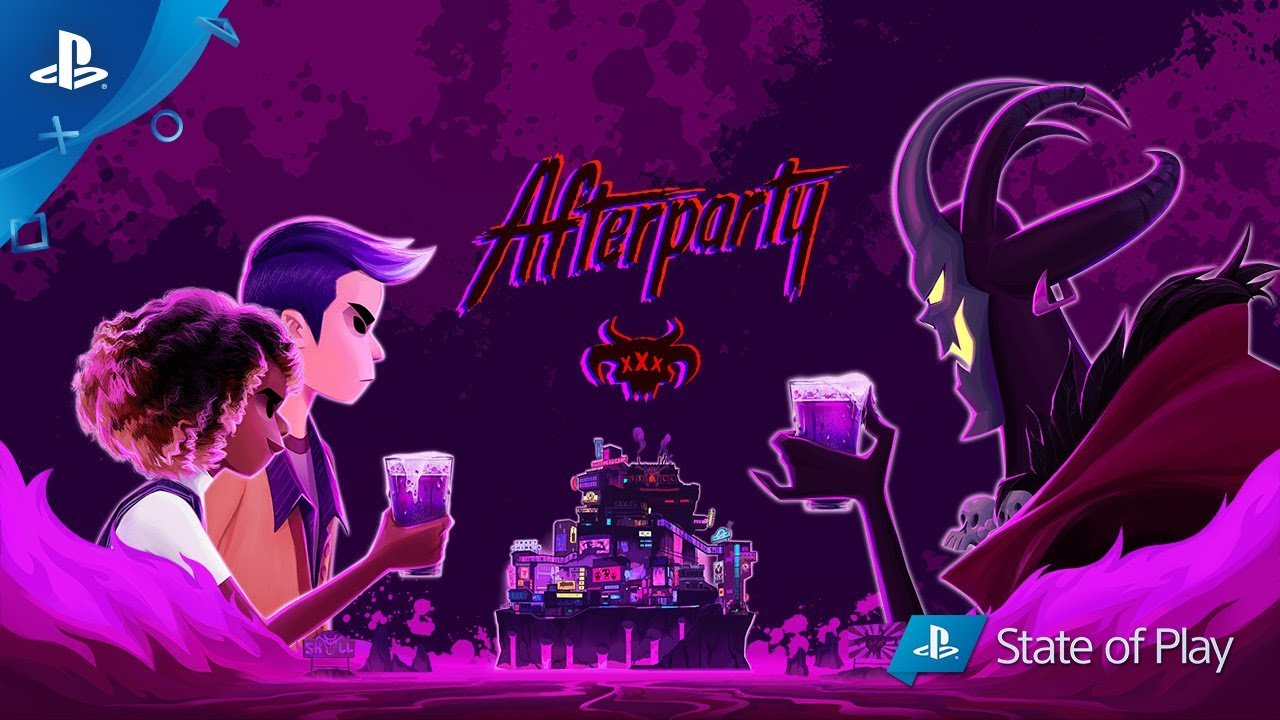 Now the not-so-great news: you’ve died and are about to burn in Hell. Instead of getting cozy with the concept of being eternally flayed, you must elbow your way into Satan’s house party and convince him to grant you re-entry to Earth. But (lucky for you?) the only way he’ll consider it is if you can outdrink him.

That’s the premise of Afterparty, our next original game after Oxenfree.

If it wasn’t apparent, our team’s mission these last couple years has been to let players inhabit their own darkly comedic adventure. The game evokes the vibes of Bill & Ted, Superbad, and Beetlejuice, but as a playable bender through Hell’s weirdest districts.

To fulfill this promise, we needed to build a world, mechanics, and story that constantly reinforced the dream of letting players star in their own comedic romp. To that end, here are the key creative pillars we focused on while making Afterparty.

First, it was imperative to our crew that you embody not one, but two characters via Afterparty’s leads, Milo and Lola. Over the course of your night in Hell, you’ll explore the peaks and valleys of long-term friendship in ways that haven’t been seen in games before.

Playing as a duo let our writers and designers explore not only the upside of long term friendship, but the pitfalls of knowing too much about each other. The game will pay close attention to how you shape your Milo and Lola; who you relate to more, whose plans you follow through with, and ultimately how you navigate the benefits and compromises of their friendship. By the end of the game, their relationship will be completely formed by your choices.

A new vision of Hell’s denizens

Afterparty’s version of the afterlife draws from all religions, but is firmly rooted in reality. It was a blast developing our own set of rules, deviating from the familiar pitchforks and fire in most interpretations of Hell. Our dead people and demons have jobs, families, and argue over the good parking spot like the rest of us. But they also throw Death Day parties for serial killers.

Whereas our last game, Oxenfree, had a unifying dilemma that the whole cast was trying to overcome, we wanted to make the situations in Afterparty reflect a much larger cast with their own unique problems. Milo and Lola just happen to stumble through these moments on their own journey, and the game is structured to feel more like a binge-worthy streaming TV series filled with an unpredictable cast.

Win over the demonic band manager who brokers deals in exchange for souls. Dance for the EDM DJ in the middle of the throbbing two-story pile of limbs. Start a fight during the reunion of a grown man with the demon that possessed his toys when he was a kid. Every bar or street corner can lead to another set of strange characters who can help Milo and Lola on their greater journey.

Things to do when you’re dead

In a game where communication is one of the player’s central abilities, we wanted to let players customize how their characters would speak.

So to aid them on their extraordinary quest, Milo and Lola are going to need a little liquid courage. To that end, we’ve created over 30 drinks to get sauced on throughout the game, each providing a different type of personality boost. Think of it like equipping a weapon, but for your words… every bar has a few different drinks that, once imbibed, give extra dialogue choices. Want to talk like a raging psycho? Order a Global Extinction. Fancy some vaudevillian flair? Grab a Great Exhibitionist. Don’t even ask what a Jeffery Bomber does.

Like the best nights out, it’s about the friends you make, ditch, or piss off along the way. We’ve structured Afterparty in a way that tries to reflect those bumpy nights, so depending on who you interact with along the way, you’ll bump into a variety of folks again later in the game, many of whom may become crucial in your quest to take down Satan.

It wouldn’t be a night on the town if you didn’t get a chance to compete in stupid games against the weirdos you meet. Beer pong, dance-offs, and shot stacking competitions will pop up when you least expect them, adding another dimension to the story.

All of these design and story choices gave us the foundation to create our weird underworld. We hope you’ll join Milo and Lola on their quest to escape Hell, or at least throw a few back with the dead, on October 29.