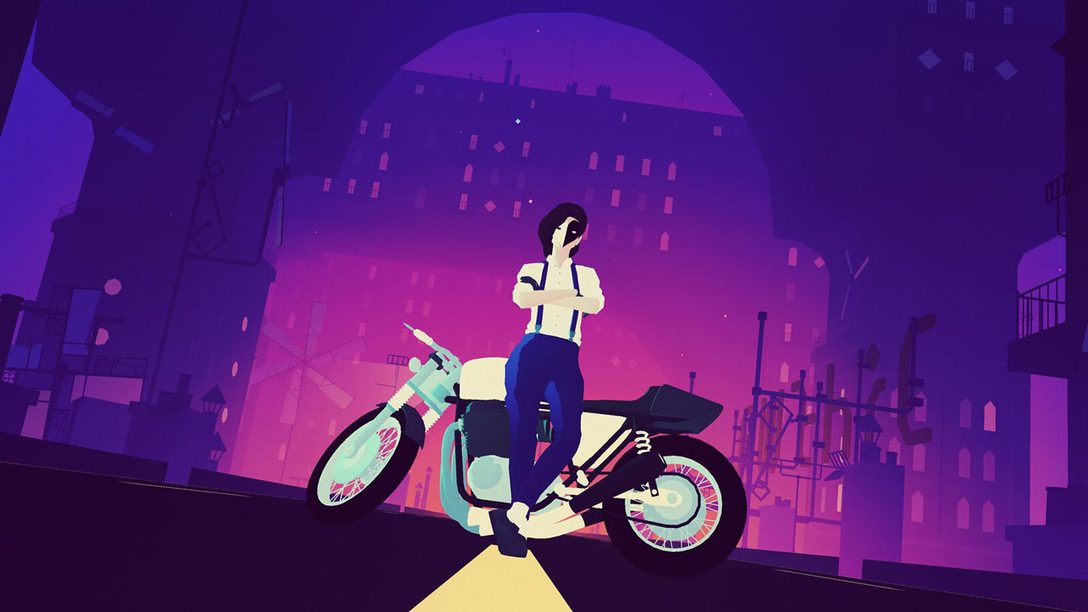 A splash of pop music-infused color comes to PS4 next week. Sayonara Wild Hearts is a dreamy, arcadey game that features motorcycles, dance battles, and an energetic soundtrack to tie it all together. Groove and battle to the beat on PS4 September 19.

In a near-future Tokyo, Special Agent Kaname Date is on the case of a mysterious serial killer. Date must investigate crime scenes as well as dreams on the hunt for clues. Hone your detective skills in this thrilling sci-fi murder mystery with 30+ hours of gameplay and multiple endings.
Bus Simulator
PS4 — Digital

Your bus. Your route. Your schedule. Whether in the industrial or harbour zone, downtown, in the surrounding villages or the business park, experience the exciting everyday life of a bus driver in a vast and freely drivable urban area. So what are you waiting for? Your shift has already started!
Castle Crashers Remastered
PS4 — Digital

Hack, slash, and smash your way to victory in this Remastered edition of the popular 2D arcade adventure from The Behemoth! At 60FPS, Castle Crashers Remastered delivers hi-res visuals like nothing you’ve ever seen before. Up to four friends can play locally or online and save your princess, defend your kingdom, and crash some castles!
Gnomes Garden Lost King
PS4 — Digital

The princess of our fairytale kingdom grew up and got married long ago. But one day, her beloved husband went hunting and didn’t come back. Where did he go? Gnomes Garden is a fun fantasy strategy game about a world of gnomes. Save the king and return prosperity to the kingdom!
Groundhog Day: Like Father Like Son
PS VR — Digital

You’re stuck in a time loop as Phil Connors, Jr., back in Punxsutawney for Groundhog Day in this virtual reality sequel to the iconic hit movie. Don’t worry, Ned will show you the way. But watch that first step — it’s a doozy! So why don’t you stay here a while?
Inferno 2
PS4 — Digital (Out 9/19)

The world’s favorite dungeon crawling Roguelike, Lost Castle is finally here with this impressive PS4 Edition! Running at 60fps, including all content available elsewhere, play with up to four friends online or offline and experience an adventure enjoyed by 1.5 million players worldwide.
Massira
PS4 — Digital (Out 9/16)

“Massira” is a story driven, puzzle adventure game with a “low poly” style, where you will experience an unforgettable adventure in the shoes of a girl and her grandmother, who make a trip from Syria to Europe, all seen through the eyes of the little one.
Mowin’ & Throwin’
PS4 — Digital (Out 9/16)

A perfect addition to your party game library! Use lawn gnomes to mow your yard and throw things to keep your neighbors from beating you! Play as lawn gnomes and wreck your neighbor’s yard by throwing rocks, fertilizer bags, and psychedelic mushrooms. Surprisingly fun!
Mutazione
PS4 — Digital (Out 9/19)

A mutant soap opera where small-town gossip meets the supernatural. Join Kai as she arrives in the mysterious community of Mutazione to care for her ailing grandfather. Discover scenic hangouts, magical gardens, new friends, and old secrets… They can survive an apocalyptic meteor strike, but can they survive their small-town drama?
Ni No Kuni: Wrath of the White Witch Remastered
PS4 — Digital, Retail (Out 9/20)

Journey back to the other world in Ni no Kuni: Wrath of the White Witch Remastered. Level-5’s classic tale returns with improved graphics and performance. Join Oliver as he embarks on an adventure through a world inhabited by new friends and ferocious foes alike in the hopes of bringing back his mother after a tragic incident.
Niffelheim
PS4 — Digital (Out 9/20)

Survive in this hostile world, ransack the neighbor lands, explore dangerous dungeons and find your way to Valhalla. Warriors remain warriors even after death. Set out on the path to the last challenge and prove yourself to the Gods. Crush anyone who dares to attack your lands. Each fallen enemy brings you closer to Asgard!
Overland
PS4 — Digital (Out 9/19)

Take care of travelers on a post-apocalyptic road-trip across the US in this turn-based survival game. Fight scary creatures, rescue stranded survivors, and scavenge for supplies. Just remember, there are consequences for every action. Get ready for dramatic escapes, hard choices, arguing about whether or not that dog gets rescued, and the end of the world.
Rebel Cops
PS4 — Digital

Lead a rag-tag squad of cops in rebellion against their town’s new criminal power, and see how long you can hold out in this unforgiving turn-based spin-off game from This Is the Police. You’ll be desperately short on supplies, and a single shot can cost a cop his life.
Sayonara Wild Hearts
PS4 — Digital (Out 9/19)

Sayonara Wild Hearts is a dreamy arcade game about riding motorcycles, skateboarding, dance battling, shooting lasers, wielding swords, and breaking hearts at 200 mph. As the heart of a young woman breaks, the balance of the universe is disturbed. Let’s Pop!
Scheming Through the Zombie Apocalypse: The Beginning
PS4 — Digital

Scheming Through The Zombie Apocalypse: The Beginning is the first episode of an episodic adventure game. Help Hank & Larry find food and loot to survive through the harsh zombie infested streets by convincing other animals to do the work for you! Featuring fully voiced dialog, experience a funny adult themed zombie apocalypse story.
The Sojourn
PS4 — Digital (Out 9/20)

Traverse a thought-provoking puzzle game and its immersive color-drenched world of light and shadow. The Sojourn takes place in a mysterious land, where lights guide you forward and the world reveals itself to be full of challenges. Overcome these intricate and ever more demanding obstacles to uncover the nature of reality.
Truck Driver
PS4 — Digital, Retail (Out 9/19)

Build your career as a Truck Driver! Haul a wide range of cargo and make a name for yourself amongst the local community. Start from the bottom, take on jobs, buy new trucks & parts and become a respected Truck Driver!
Witching Tower VR
PS VR — Digital

Immerse yourself in the dark fantasy world of the Witching Tower, a VR Action Adventure in which you solve puzzles, fight enemies, and uncover secrets. Explore the labyrinth of the Tower, unraveling each level’s new mysteries and unique gameplay mechanics.