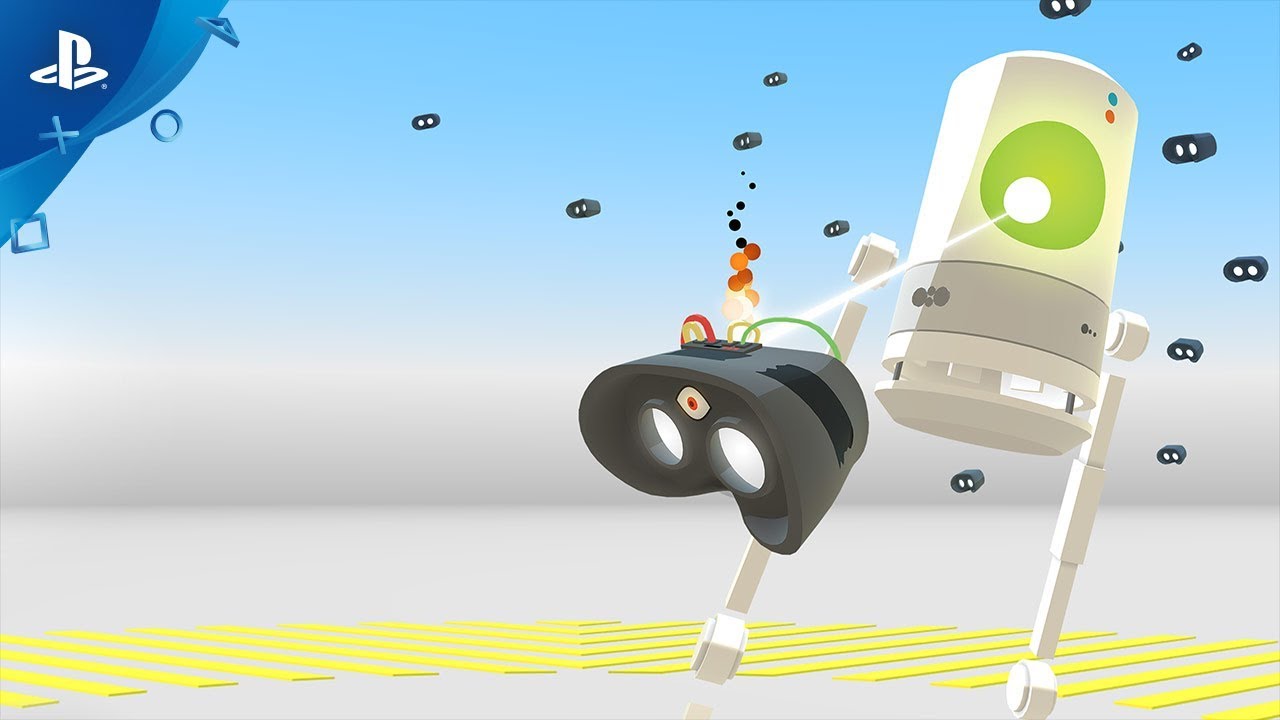 We’re excited to bring our darkly comedic and surrealist sci-fi adventure to PlayStation VR! As we open the world of Virtual Virtual Reality to new players today, I’m here to share a little about its inspiration.

Put On Your Headset, Find Your Calling

VVR plays like an extended sci-fi fever dream. In the near future, AI may have taken our jobs, but no hard feelings — we humans are kept as cherished pets, beloved by AI for our quirky, inefficient ways. Activitude, the Virtual Labor System, still provides “meaningful” employment and assures you that your artisanal human companionship is highly sought by our A.I. clients, even if their requests seem… eclectic.

You could, dear reader, live quite comfortably completing an odd assortment of mildly unsettling tasks for AI looking to be entertained by that human je ne sais quoi. Perhaps a gruff pinwheel named “Sprinkle Tooth” needs his garden tended or “Butter” is in good need of a bread slathering.

Or, or you may just find a deeper purpose lurking just beyond the scenes: the story of Activitude’s evolution from VR start-up to the “human purpose provider” it is today. Along the way, put on VR headsets in VR to jump between virtual realities or simply vacuum up reality with your Activitude Brand Poly Cleanup Tool™! And then there’s Chaz… but, I wouldn’t want to spoil Chaz for you…

Before the current era of VR, I worked for eight years on narrative projects for a Cave Automated Virtual Environment: a form of VR different than the HMDs (helmet-mounted displays) we have today. I watched technology evolve, even while observing the industry weather a “VR Winter.” This was actually a fruitful time to work in VR. Lower stakes permitted a lot of risk-free experimentation by researchers tinkering away at universities. There was room for not-typical creators to play around with the tech like writing students under the guidance of novelist Robert Coover.

Living through this time, it was clear that VR was more than just flashes of hype, but something more enduring tied into our collective desire for ever more perfect immersion in fantasy worlds. Something that goes as far back as 360 paintings in Roman Villas, maybe further. The efforts of researchers and artists to continuously iterate on this promise eventually led to the VR of today.

But… much of what came before was forgotten: archived, like Activitude’s history. VVR began in Fall 2015 as a hackathon project inspired by the surreal, often comedic experience of watching an industry grow up, re-invent itself and forget itself. Activitude’s evolution and characters are very much inspired by lived experience. VVR is as much a love letter to VR as a cautionary tale that simultaneously celebrates and pokes fun at all our technological aspirations from AI and mind transfer to gig labor and smart cities. But, at its heart, VVR is also a comedic adventure that one can just experience and enjoy.

“Any new graphics tech needs a demo, and every demo needs a whale.”

As a member of the space whale community, Bernice was once the quintessential XR demo for everything, ever. In a future of VR adoption, she’s a former starlet, dreaming of her glory days.

Eliza: A homage to the first computer therapist, her AI evolved to run a Virtual Travel Agency. She believes “armchair tourism” soothes the senses.

Hernandez: Currently an artichoke and CEO of “Activate,” an older platform for hiring virtual AI assistants. He likes to work out and gets cranky without his vitamin C supplements.