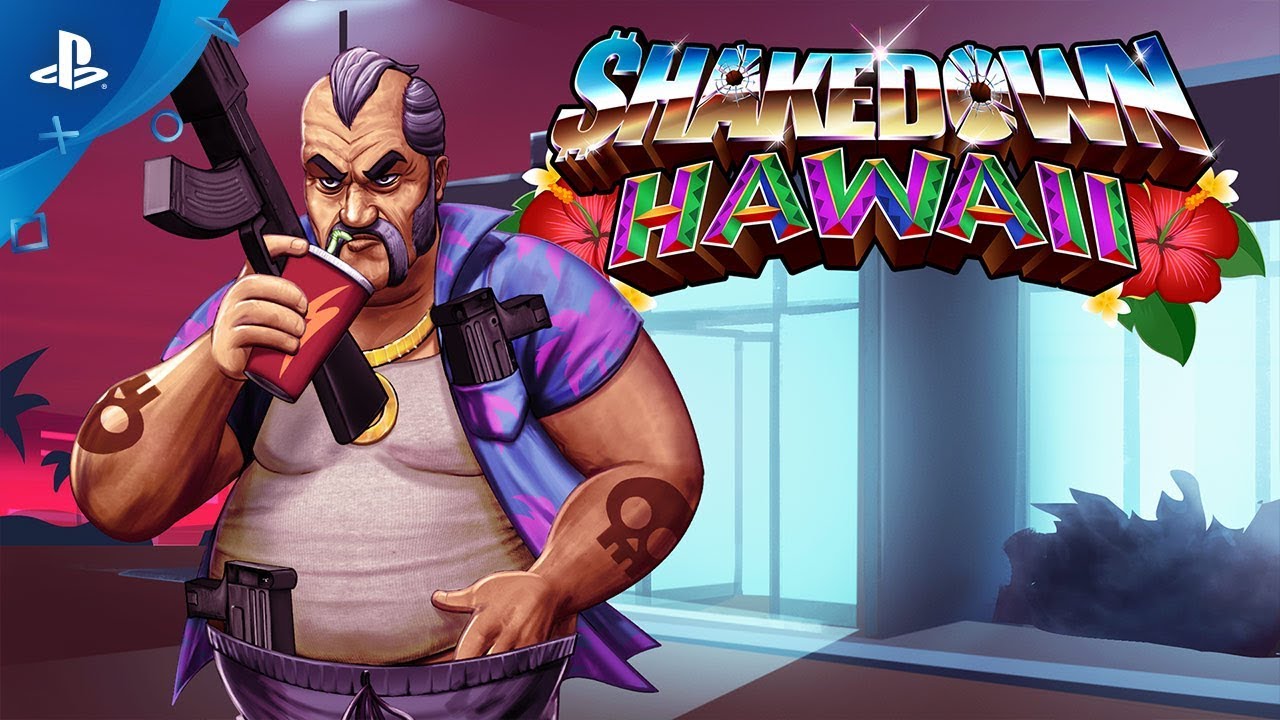 Get ready to dive into Shakedown: Hawaii’s 16-bit open world! It’s finally wrapped, and landing on your PS4 and PS Vita on May 7!

In case you missed the last blog post, Shakedown: Hawaii combines its open-world gameplay with empire building. Every building on the island is up for grabs — or at least, could be — with the right business model…

For an even deeper overview of the game, check out this video:

With that, now let’s talk a bit more about how some of the game’s key aspects came to be.

The Entire Island Is Up For Grabs

Shakedown: Hawaii is a sandbox for you to play in, however you choose. There are missions, sidequests, minigames, arcade challenges, shops to shake down, and, of course, businesses to acquire. Businesses and buildings unlock through several means: some through the story mode, some through shaking down shops for protection money, some through sidequests, and some simply by levelling up your mogul status. There are over 80 shops to shakedown, and they can be completed in any order, adding to the open world experience. With each successful shakedown, you’ll not only earn some pocket change, but can also unlock the entire building for purchase.

Purchased properties have various benefits. For example, acquiring residential ones will create a housing shortage, and acquiring gun shops will unlock more weapons. Most properties can generate revenue, and that revenue can be boosted by adding multipliers such as “convenience” fees, unnecessary best before dates, store credit cards, and lobbyists. If you’re like me and want to own the entire city, it’s all at your fingertips. However, if you just want open-world action, how much of the island you choose to take over is all up to you.

It was important to me that the game’s comedy came across as playful and tongue and cheek. Ultimately, I approached the subject matter through situational comedy. You can imagine a TV show, in which a blundering protagonist misses their bus, stubs their toe, then slips on a banana peel, all to audience laughter… but instead of those events, their misfortunate here comes from a cartoonish bombardment of misleading ads, deceptive packaging, fine print, and other questionable business practices.

As often as the CEO formulates a harebrained scheme, he too — as a consumer — is on the other end of some other company’s scheme! It’s from this, where some of my favorite moments came. The back and forth skits between the CEO and his son as they struggle with “convenience fees,” etc. really helped anchor the tone to where I wanted it.

By the third mission, the game makes it loud and clear where things are headed. That’s when the CEO learns that this newfangled thing called “online shopping” is killing his retail stores! Naturally, his solution is to put on a mask and go around destroying delivery trucks in an attempt to save his business. With that, the tone is locked in! This game is goofy, absurd, and not to be taken seriously!

Although Retro City Rampage adhered relatively strictly to 8-bit limitations, moving forward, I decided to pursue more of a “rose-tinted glasses” approach. With Shakedown: Hawaii, I gave the art and artists complete freedom. It’s a 16-bit style game, but without limitations, and it aims to evoke more of the 32-bit era of 2D games and beyond.

By tossing away the restrictions, the characters could boast as many frames of animation as the artists could produce; the world could be as large as it needed to be; and literally everything in the background could be interactive an animate.

Of course, I didn’t quite realize what I was getting myself into! I began production with the line, “Let’s give the character a super smooth walk cycle, an almost rotoscoped look.” Ooof! I completely underestimated what I was asking for. I’d somehow forgotten that the characters would need both walk and run cycles… for every direction… and multiplied by every weapon — all hand-drawn. By the end, those little sprites literally boasted thousands of frames! However, now that all the work’s behind us, I’m glad my naivety made that decision!

Art of the 16-bit era was much more than just 8-bit with more colors. It was a total paradigm shift — and once you make the decision to boast the fidelity on one aspect, it often opens a can of worms (in a good way, but a daunting way). For example, Retro City Rampage’s vehicles sported 16 angles of rotation, which felt right in 8-bit, but felt stiff in 16, so for Shakedown: Hawaii, the vehicles needed to freely rotate. But, once they were freely rotating, the driving controls needed to be completely redone and retuned.

Likewise, once we had a smooth walk cycle, intermediary animations were needed everywhere else to match the fidelity. A squashed enemy couldn’t just “pop” into a squashed frame; they had to play a full animation! Then, of course, timing is critical to gameplay — an animation might look great, but if it’s too long in-game, it won’t feel right, so the timing of every frame had to be carefully tuned. One thing leads to another, and leads to another… All in all, it was a huge undertaking to produce this volume of art, but the result is something I’m incredibly proud of!

If you want to get physical, pre-orders for the PS Vita cartridge version go live on at Friday, May 3 at 10am Pacific / 1pm Eastern at vblank.com. The PS4 physical edition is coming a bit later, but you can sign up for alerts to get a notification!

A final PS Vita physical edition of Retro City Rampage DX also goes on sale Wednesday, April 24 at vblank.com, so if you missed the 2015 release, there’s another chance to complete your collection!

That’s all for now! Be sure to comment below, and I’ll try to answer your questions!