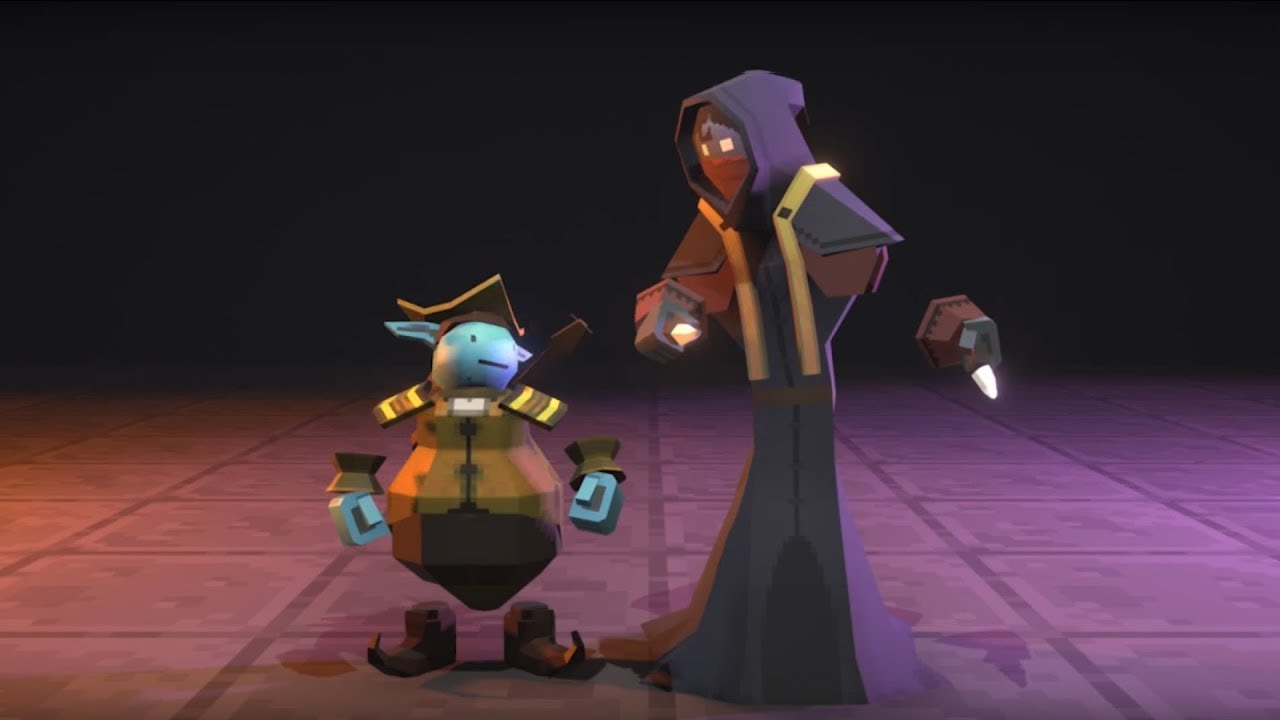 Whether alone or with friends, there are plenty of ways to ransack a treasure-filled castle in PS VR.

Smash Hit Plunder is out in the US regions! You can play the game single-player, but you can also play together with friends and family with local co-op and vs. multiplayer gameplay using the TV screen.

Smash Hit Plunder has a full single player campaign, with plenty of story and levels to go through. It’s really important for a game to give you a sense of progression, to make it feel like a “full game” rather than a demo. In Smash Hit Plunder, we have a various ways of feeling like you are progressing through the game and getting better at it.

There is the story — with a start, middle and end — and it feels like a complete game by giving both context and an aim to the game. You have signed a contract with Mordred, the loan shark, to agree to take on the family castle debts. You have to pay back your mortgage to be able to recover the castle, and keep Mordred happy. Of course, there’s also the ghostly conclusion…

You are scored for each level, and by collecting more loot you are awarded more crowns. As you get more crowns, new levels, story and game modes unlock. By unlocking new levels and game modes you get new tasks to do, places to explore, things to discover and new challenges. You’ll be tested in navigation, exploration, efficiency, speed, accuracy, observation and even teamwork. All your skills are tested in different ways and amounts, in differing levels and modes — and it’s this mixture and pacing that makes you feel like you are getting better at the game, self-learning new ways of doing things, and feeling like you have something you can improve on as you progress.

There are three different game modes to play in each level:

Treasure Rush: Smash, burn, and pillage everything and collect as much loot as possible within the time limit. Your timer is always ticking down so you will end up finding your most profitable route through a level, much like in the Katamari series.

Scavenger Hunt: Now it’s time to find the item most wanted by Grandma. Look in your book, recall where that item is in the dungeon and race to get there! Try not to disturb the ghosts on your way! The time limit ticks down, but everytime you find and collect the right item you get loot and extra time to find the next. Rather like Crazy Taxi, the quicker you find that next item the larger the score and the more the bonus time.

Freeplay: Do away with a time limit and have unlimited health, and explore at your own pace. Find the best sources of loot, see where all the secrets are hidden, and scout out your path to riches. Of course you can just mess around if you wish; I quite like building and balancing the biggest pile of objects all around the level into one tall tower, then smashing or burning the lot in one go. This mode is also perfect for people new to VR, allowing them the freedom to get used to the experience before the serious competition begins.

All three of these game modes are single-player, but at any time you can have someone join you while you are in VR by using the TV screen and another controller. The TV player will join as a friendly Goblin! They can either start alongside by joining in the level-select area, or drop into a game in progress. If you don’t wish them to be there anymore, they can leave at any time.

This means you can either play through the whole campaign co-op if you wish, or just have someone join you quickly for that one room full of ghosts or to help with that one object you can find in Scavenger Hunt. We don’t penalize you in any way for getting co-op help, but you can see a breakdown at the end of who got what as well as your combined score. This allows similar sort of feel to that of Zelda: Four Swords: you can work together to complete the dungeon if you like, but you can also compete for the highest score!

Smash Hit Plunder does have online leaderboards you can compete in, but typically most people ignore standard leaderboards unless they are in the top 100 or so players. It’s also pretty boring scrolling through a long list of names which mean nothing to you. In Smash Hit Plunder we have come up with a new system that uses the leaderboard data in a really interesting way, so that it gives you realistic goals based on your abilities, and if you complete those goals you get rewarded.

We call these Trials. We generate a fresh Trials for you automatically at the start of each level — each Trial different from the last. You may have one based on how many items your friend has smashed in a level, perhaps one based on how far you ventured into the level last time, or perhaps if you are in the top 10 then telling you how much you have to score to get the top rank in the world. It gives you a great immediate goal and a reward if you have improved your skills last time you tried a level. The system both gives you a sense of progression, and always tests your own skill level. Having that extra friend coming in really helps you nail those top spots!

While you can fight each other in co-op if you wanted to, a more arranged competition is really fun. Now you can have one VR player and up to three TV players playing against each other in either of our two vs. modes in our bigger dungeons.

Jewel Duel: Grandma has lost jewelry boxes full of treasure in each of the dungeon rooms. Follow Grandma to the room she’s in, smash up the room and discover the box. Now come the brawling action as you have to be the first to give the jewelry box to Grandma to win its precious prize! Throw anything you can find at the player with the box to get them to drop it. The team with the most treasure wins!

Poltergeist Panic: This is one is special, as it really only works because of the different views the VR and TV players have. It’s a little like hide and seek, but with much more action! The VR player is a Poltergeist — a ghost that cannot be seen but can interact with the living world and move objects. The Poltergeist has to destroy the dungeon and get enough gems to unlock the trapped ghosts in each room. The TV Goblins have to stop the VR Poltergeist, but how do they do that if they cannot see the player? They have to look for clues, for the trail of destruction and try and catch the Poltergeist in action. When they think they have found the Poltergeist, they can use their Torch to reveal them. The Goblins also have a bit of their own magic which charges up over time. When ready, a Goblin can cast a spell over the dungeon which reveals where the Poltergeist is hiding. Throw objects at the Poltergeist, whether they are hidden or revealed, in order to dispel them and stop them from freeing the ghosts. If the Poltergeist runs out of time or health, the Goblins win, but if the Poltergeist frees enough ghosts, they win!