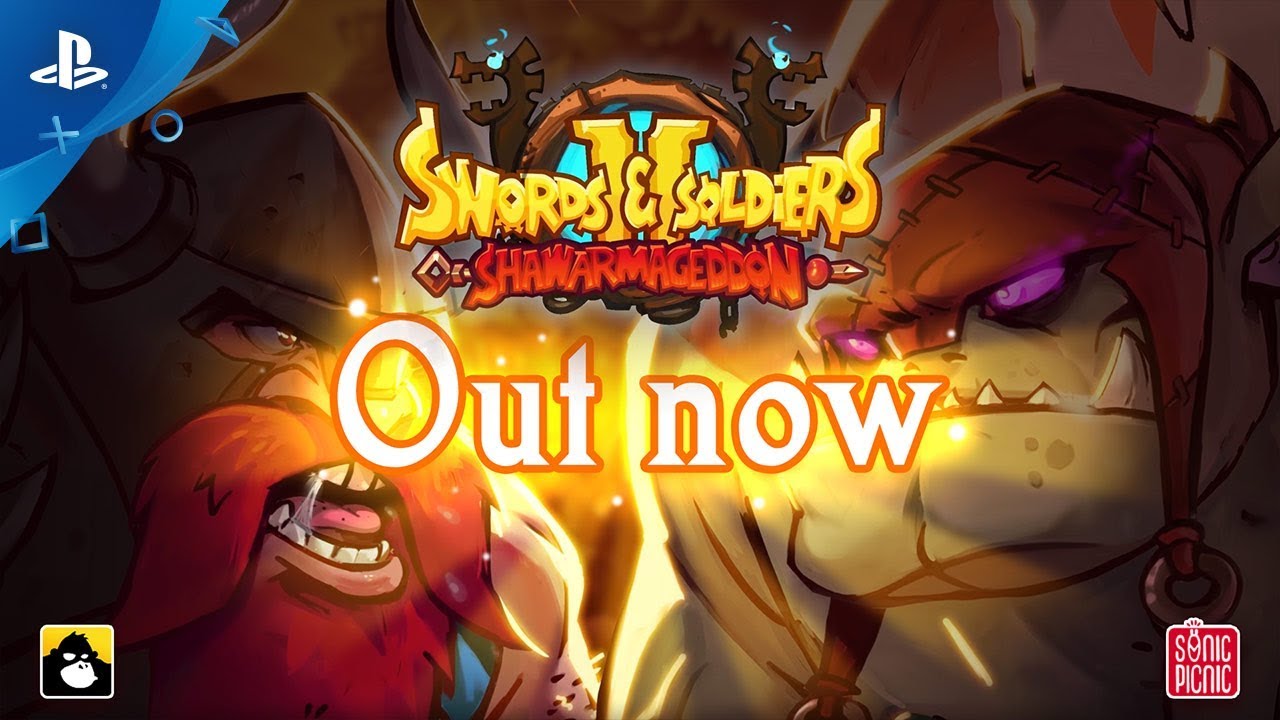 This side-scrolling strategy game is all about the pursuit of the perfect shawarma. Delicious!

Swords and Soldiers 2 Shawarmageddon brings Vikings, Persians and Demons together in an epic war for control of the perfect shawarma! Our side-scrolling strategy game has all the good stuff you’d want…

The single-player campaign tells a story leading from the Viking homeland all the way to Persian deserts and the depths of the netherworld itself! On top of this 10-hour tale you can practice against the AI in skirmish battles and try for high scores in a series of hilarious mini-games, before taking on online opponents.

Multiplayer support includes split-screen and online play, and a custom army builder feature which allows you to mix and match your favorite units, spells and structures from across the three factions. If you want to combine Viking berserkers with carpet-riding fakirs and demonic magic, go for it! You can also skirmish or mini-game while waiting for an online match-up, then return to the skirmish after your multiplayer battle is complete.

Swords and Soldiers 2 Shawarmageddon is running a special week-one bundle! That bundle includes a 10% launch discount and four special avatars from the game in a Launch Promo Pack: Phil the Genie, delicious Sheep, solid Shield spell, and the Persian ‘Dance of Daggers’ super spell! More avatars will be available at PS Store of course, both free and paid, as the variety in our factions and units mean there’s something for everyone. Let’s take a look!

Unleash your inner genie with Phil, the djinn of a magic lamp which plays a large part in the story of Swords and Soldiers 2 Shawarmageddon. He looks very serious compared to the Vikings. We wouldn’t recommend asking him for any wishes! He’s included in the Launch Promo Pack, along with two magical avatars — literally! The Dance of Daggers spell offers a dynamic, dashing and deadly demonstration of a delightfully distinguished disposition, while the Shield spell avatar will protect you from trolls*.

*May not actually protect you from trolls, but it does look cool…

If these avatars sound too serious you could choose to represent yourself as… a sheep! A delicious, delicious sheep. Source of shawarma, bringer of brilliant flavor, utterly useless in a fight. In fact, one of our mini-games involves dropping meteors to defend one of your tasty four legged friends from waves of demonic sheep rustlers! If that’s not enough sheep for you, the Vikings also have a spell to transmogrify troublesome enemy units into a harmless fluffy food source.

We really wanted to emphasize differences between factions, from unit and spell variety to how they collect the mana for spell casting.

The Vikings generally rely on brute force, with tough but expensive units backed up by Freya’s Healing and Thor’s Lightning. They use valuable real-estate for putting up mana menhirs to generate more of the magical blue stuff, and they can summon snowstorms or call Thor’s hammer Mjolnir to smash into massed enemy ranks if lightning isn’t enough.

For beard-lovers, there will be a free Viking Avatar Pack featuring both the Viking leader Redbeard and Gramps, whose beard is less huge but makes up for it with fetching tartan and a traditional tam o’ shanter cap. The other Viking representative in the pack is Helga, their faction hero unit in the game. This valkyrie is as skilled with her operatic singing as she is with that enormous hammer, and will inspire friendly units to fight harder!

Other avatars that will be available at PS Store will be from the Demon armies, who offer a mix of cunning and brute strength! Two demonic leaders, Sir Loyn and Miss Chief, are featured alongside the humble boggart Charles (boggarts are the demon workers in-game). The fourth demon avatar is the sinister Necromancer, who raises the dead to fight again as spooky skeletons. We think the Demon units are great fun – particular favorites include explosive barrel riders and the enormous Troll hero, who can literally hurl friendly units over enemy defenses or hurry them into the fray!

Practicing dark magic, the Demons can sacrifice their own units to suck mana directly from their health bars, leaving behind a skeleton to fight on (they also have a Crypt structure that pops out a stream of skeletons… you may be noticing something of a theme here)! Their spells can explode corpses, transform their workers into cash stealing fighters, or summon kobold trappers who float above the battlefield waiting for enemies to catch and consume — fiendish!

The ancient Persian armies can hit hard and turn the tides of battle with stealthy Desert Stalkers and subtle magic with the ability to leap allies forward, bribe enemy units into switching sides, creating mirage doubles of units. To generate more mana, the Persians can switch their Gold Mine to become a Mana Mine. This combines excellently with their hero unit, Phil the Genie, who can activate his wish-granting mode to halve spell costs and cooldowns!

The art style for Swords and Soldiers 2 Shawarmageddon was initially heavily inspired by French comics and traditional animation. Here at Ronimo we really love the specific way of drawing characters and finer hints of detail in the art of comic artists like Albert Uderzo (Asterix & Obelix), and we strived to emulate that in Swords and Soldiers 2 Shawarmageddon. A good example of this can be found when looking at the iconic berserker unit: compared to our previous game his lines now have a lot more variation in width to create the traditional “inked” feeling. Parts in shadow generally tend to have thicker lines, while parts that are in the light are a little thinner. Increased detail can be found in both the face and the detailing on the armor itself.

To contrast with this comic look we chose to have the backgrounds in a more painterly style reminiscent of traditional animated movies like Aladdin. It also contrasts nicely with the characters to make it easy for the player to see what’s relevant to the gameplay and what’s not.

For a long time we’ve also looked at older animations to guide our choices in what we would use outlines for and what we would keep painted. The rule ‘only outline what moves/interacts with other objects’ was at first used as an incredibly strict guideline, but that lead to results that, in the eyes of the team, were not ideal. A good example of this was an early iteration of the Viking base: only the tires were outlined (as the Viking base is able to drive in certain parts of the game), and everything else was painted. This, however, caused the team while playtesting to feel a jarring visual disconnect between the two parts of this single structure. Therefore we revised our plan to the more liberal use of outlines in the game that you see right now.

To further reinforce the feeling of playing a game that looks and feels like a cartoon or a comic, we also put a lot of time in making the special FX feel like traditional animation. We did this by combining frame-to-frame animation and effects like particles and glows that our custom Ronitech engine takes care of.

We’re excited to show off Swords and Soldiers 2 Shawarmageddon to the world, and we hope everyone will have as much fun playing it as we’ve had making it! With three powerful factions willing to go to any lengths for the perfect shawarma — the only thing certain is that there will be the battle of a lifetime!