Get the Hole Story in Donut County, Out August 28 on PS4 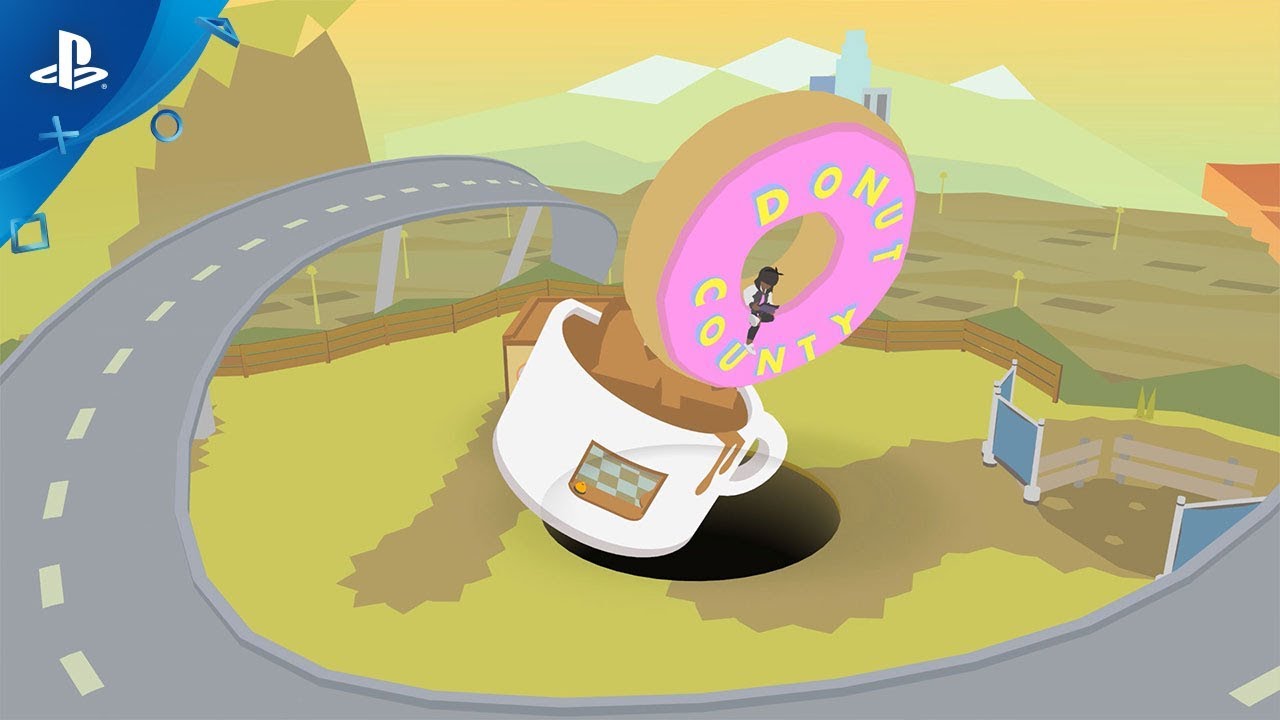 This story is full of holes.

I’m really excited to announce that Donut County will be available on PlayStation Store on August 28, with pre-orders available right now. It’s a game about raccoons who use holes to steal people’s trash. It’s a real passion project – I have been developing this game mostly on my own starting in 2012.

Those who pre-order Donut County right now will get the “Throne Room” dynamic theme for free. I hope you’ll find the theme inspiring, yet relatable:

Note: This is based on an actual scene in the game.

I like dynamic themes with chill music and non-intrusive sound effects, so I did my best to pick music and sounds from the game that you’ll enjoy hearing for a long time, haha. We also worked hard to make it look as close to the game as possible.

Donut County is a wacky physics puzzle game, but it’s really held together by a story about a raccoon named BK and his best friend Mira. Before the town gets destroyed by holes, BK & Mira work together at a donut shop that turns out to be a front for the trash-stealing Raccoon Company. While Mira turns the other cheek, BK gets sucked into the job of opening up holes to steal his friends’ houses. And that’s just the beginning.

Your guess is as good as mine.

My first apartment in Los Angeles was basically run by raccoons. They were sleeping in the laundry machines, stealing pool floats, and howling from rooftops. The raccoons kept to themselves usually, so I wasn’t scared of them until one night when I heard a chittering sound from right above my head. I froze. Four feet away on the rooftop a raccoon stared at me, dead eyed, chewing on a battery. He was eating the battery. That was when I knew – raccoons cannot be stopped.

This is a screenshot from the Trashopedia, an inventory screen where you can see all the items you collect in the game. Naturally, the descriptions are all written by an idiot raccoon.

Until then, Donut County didn’t feel right – it was kind of cruel because you were playing as an evil force of nature: a creepy, destructive hole. Since you played as the villain I knew I needed a character who was dumb and wanted to steal people’s trash. It was staring me right in the face. Chewing on a D battery.

At first I found it really inspiring, haha. I knew Donut County would be all about the brilliance and stupidity of raccoons, but I still had to figure out their personality… and how did they control the holes?

That was when we my girlfriend and I got our cat, Favor. He’s a doofus. We had a running joke about how Favor was a huge gamer who collects rare PlayStation 3 skins. Oh yeah, he also looks kinda like a raccoon.

They always tell you to “write what you know.” I love games, my cat is a gamer, and starting that day, the raccoons in Donut County were gamers. They’d control the holes using little tablets while they sit on the toilet. I loved writing BK and the rest of the raccoons because I got to make fun of myself. And Favor.

There are lots more characters to meet and throw in the hole when you play Donut County on August 28. It’s a really funny and unique game about holes, donuts, and idiot raccoons. I’m really proud of how the game came together and I can’t wait for you to try it.