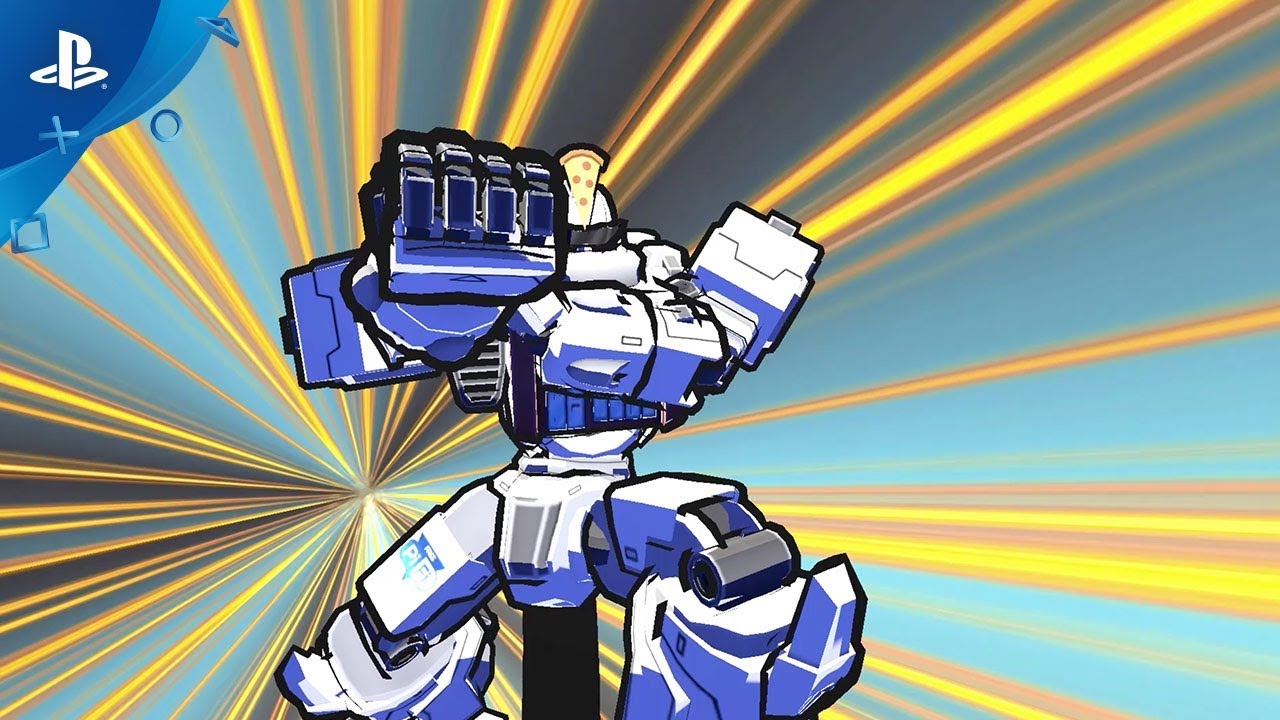 From the team that brought you a game about narwhals battling in outer space, build and command a pizza-delivering giant robot in a disconcertingly destructible city.

Breakfall likes to make pretty silly games. Our breakout success, Starwhal, was all about neon narwhals fighting in space. So of course our new title is about mechs that deliver pizza. You can get both games for an insane price with a pre-order that just went live.

A quick summary if you’re not familiar with the game: Pizza Titan Ultra is about a giant robot with a pizzeria in its chest.

This is how you “run a restaurant.”

It’s highly customizable with tons of rad looking parts, so you build your own sweet pizza delivering machine! You move through a destructible city, generally trying not to make too much of a mess. But you can basically destroy the entire city. As you run between delivery locations, you get more money and more time for each delivery. Always racing the clock and always delivering pizzas, story missions then add additional objectives.

These missions range from treasure hunts to deliberate city destruction to hunting down specific evil enemy robots. Evil enemy robots? Yes, you are besieged in escalating fashion by the minions of Cheezborg, the cheezbots, who are stolen military tech. Cheezborg used to have its own pizzeria, but it was gross and you put it out of business and now it’s angry enough to take some pretty extreme measures (it escalates to time travel).

Cheezborg taunts Ultra Pizza in the midst of a heated battle in front of City Hall.

The whole thing is something of a love letter to radical ’90s cartoons and video games and pop culture. What’s outlined above is a pretty crazy base, but it only gets sillier from there. You deliver pizzas to characters inspired by Bob Ross, Parappa the Rapper, and Captain Planet. Starwhals make appearances. A Scrooge-McDuck-inspired goose has you destroy downtown so he can build new luxury condos (you only agree because you’re trying to solve the mystery of how Cheezborg got his army).

But amidst all this insanity, the gameplay kept changing. The theme is awesome, but what exactly is the intersection of mech piloting and meal delivery? Is this more Hawken, or more Crazy Taxi? What would the love child of Rampage and Sonic look like? Are we just remaking Blast Corps with a restaurant?

We always tried to lean into player expectations, changing elements (and redesigning our entire UI way too often), to make something that felt intuitive, fast, and fun. Learning interesting systems is good, but if everything feels just a little different from what you expect when you first pick up the controller, then it’s hard to focus on punching helicopters and drop-kicking hover tanks.

Racing across the islands, punching helicopters, and drop-kicking tanks for Planetman.

We started with a long series of experiments that changed up the formula. We tried out everything from super slidey, almost skating robot physics, to incredibly slow acceleration. There were hype systems and pizza health and restaurant seating management. Most of the weird stuff felt slightly off, or was so counterintuitive we just couldn’t get players to wrap their heads around what was even happening.

The ultimate design mantra of Pizza Titan Ultra became “weighty, but agile.” We gradually gave the player more speed, more acceleration, more jump height, longer reach on attacks, and bigger area-of-effect destruction. Breakfall is trying to deliver a game where you feel like you’re crashing through a futuristic city in the most radical way possible.

Some weighty-but-agile rooftop running. Action roll across the lawn for good measure.

With the basic player controls feeling good, there were still a lot questions about other game systems. We played around a lot with gaining (or losing) time, health, or cash, for various interactions. We kept asking if enemies should be mandatory obstacles, or slow you down, or offer enticing rewards. It took a lot of iteration and testing to strike a balance where it’s worth using your attacks to dispatch enemies on the way between deliveries, but not so much that you stop delivering and just go off looking for battles (unless the mission specifically calls for that). But we force the player to do very little.

Two approaches: well-timed air dodge to get the heck away, or fight through the chaos to turn your enemies into time, health, and cash piñatas!

Another important question: how much should the player worry about destruction? We loved the aesthetic of smashing the city, but the Ultra Pizza crew are heroes, not villains. Should we punish players for destroying everything in their path? Ultimately we decided to mostly leave that one up to players too. You may hear from the Mayor if you start going nuts, but you won’t fail most missions.

It’s really not NICE to smash the city. Still, it’s at the discretion of the mech pilot.

Another interesting curveball during development was the fan appetite for our story! Breakfall likes to bring games to conventions, as it’s a great way to meet players and get reactions to our games in development. What was most surprising, though, was the shocking number of players willing to read through our text, even on a busy show floor! We probably quadrupled the amount of dialogue in the game because our players kept wanting more.

Getting the references is half the fun, but we tried to make the characters also care about what was happening. So even if you don’t know all the superheroes Firebird X is paying homage to, you can still laugh about interdimensional psychic aliens reacting to pineapple on pizza.

But if you want to skip all that, there’s always plenty of fast-paced, city crushing action.

We tried very hard to make Pizza Titan Ultra a game with great feel. Our recent inclusion in the PAX 10 top indie games of 2018 tells us a large panel of industry experts feels we did! As you master the controls, with various area-affecting high and low attacks, as well as nimble dodges and various ways to turbo speed across town, you get into a great flow. I’ve been playing the heck out of Pizza Titan Ultra for a couple of years now, and the game still delivers moment-to-moment gameplay I enjoy after all those hours.

You can power through the campaign chapters in an afternoon, but to truly master the Challenge levels takes a high level of passion for, and dedication to, mech piloting. Hope to see some of you building your own tubular mechs and stomping through Galactic City to deliver pizza soon! Pre-order today on PSN to get 20% off, and a free copy of Starwhal!