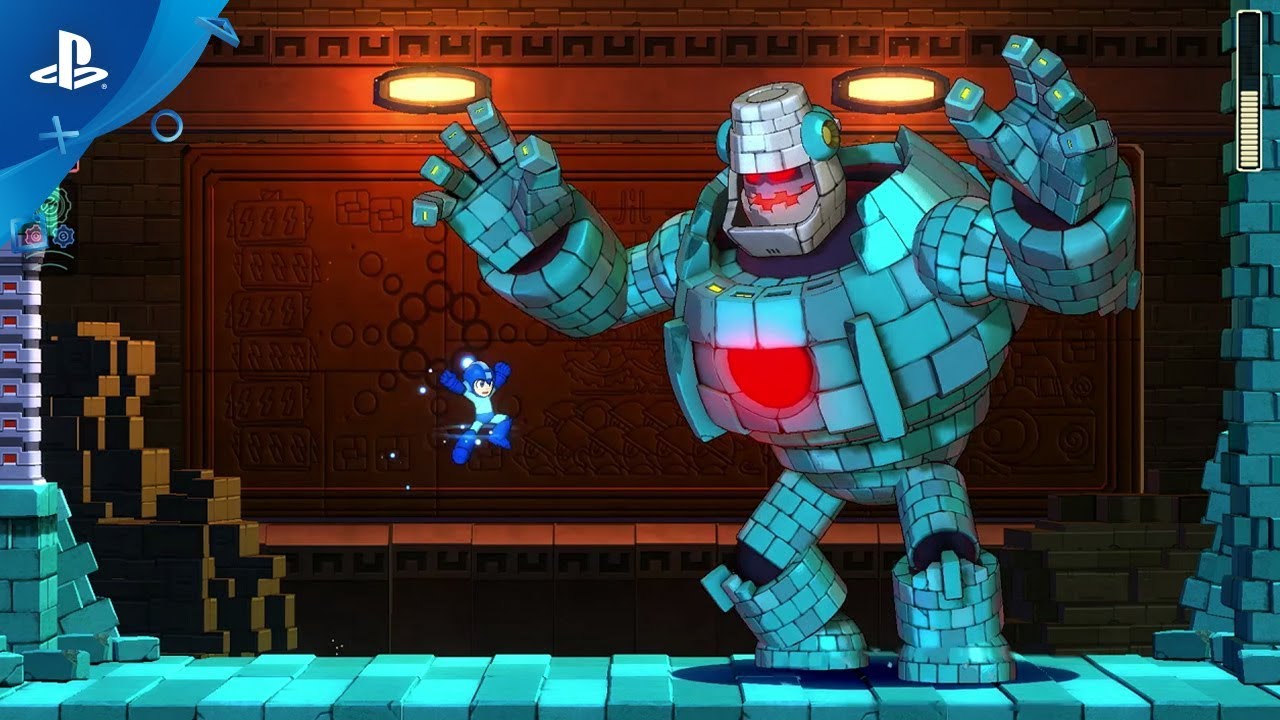 The Blue Bomber slides to PS4 later this year with new tools and tricks up his sleeve.

The iconic Blue Bomber has benefited from numerous hardware upgrades over the past 30 years. A slew of enhancements such as his slide ability, trusty canine Rush, and charge shot have helped the determined little robot fight for justice time and time again. Now, Mega Man is about to get equipped with his most powerful upgrade yet in Mega Man 11: the Double Gear system. In addition to a detailed look at this innovative new gameplay system, I will take you behind the curtain to meet two of the game’s Robot Masters – Block Man and Fuse Man – who you will be facing off against when Mega Man 11 hits PS4 on October 2.

Dr. Wily is up to his old tricks, and Mega Man must tap into the evil genius’s own technology to combat eight haywire Robot Masters. The new Double Gear system allows Mega Man to increase his speed, slowing the world around him to a crawl, or power up his Mega Buster shots to blow away tough enemies. You’ll be able to tap into these new abilities from the start of the game, which can be helpful aids in tricky situations. A tip for players: while you can turn these gears on and off whenever you want, you can only use one of them at a time. Over-use will cause Mega Man to overheat, preventing him from using either gear until he’s cooled down a bit.

So how does all this come together in Mega Man’s latest adventure? Let’s take a look at two of the stages you’ll play through on your quest to foil Dr. Wily’s plan, starting off with a pyramid-dotted landscape ruled over by a headstrong Robot Master named Block Man!

Chip Off the Old Block

Starting in a gorgeous outdoor area featuring hand-drawn backgrounds with distant pyramids, you’ll jump and shoot your way through the classic platforming action that Mega Man is known for. It makes a great introduction for the trials that are to come, a wide-open area with a few pits to hop over and a handful of enemies to dodge or try the Mega Buster – your trusty default weapon – against. It feels a bit like a playground to test out the rock-solid controls, but soon enough you’ll be stepping inside one of the many pyramids that Block Man has seemingly converted into a monument to himself. This rather self-centered Robot Master has all but carved his name in stone, leaving hieroglyphs and murals everywhere that feature his face.

As you make your way further into the pyramid, you’ll find plenty of places to put the new Double Gear system to the test. The hammer-swinging skulls that guard cramped corridors are tough as iron, but easily crumble when you use the Power Gear to rapidly unleash overcharged Mega Buster shots. Vertical corridors filled with sliding blocks will challenge your platforming skills, but using the Speed Gear can slow things down and help you can navigate tricky jumps and avoid blocks dropping on your head. Slowing time also helps you navigate maze-like blocks that threaten to carry you straight into a massive literal metal-grinder if you don’t escape quickly enough.

Once you’ve reached the end of Block Man’s stage, get ready for a boss battle with the self-centered Robot Master himself! He seems like a bit of a pushover at first, dropping blocks from above in a steady rhythm while running around the room. However, when he’s reached his breaking point, Block Man uses his own Power Gear to transforms into a new, hulking form that towers over Mega Man. You can chip away at his health with regular shots, but alternating between the Speed Gear to dodge his onslaught and the Power Gear to unleash powerful attacks is a great way to take him down quickly. The Speed Gear can be especially useful to slow down bosses and study their movements for easier dodging.

Defeat Block Man to show him that you’re not just another brick in the wall, and you’ll be rewarded with a unique weapon: Block Dropper! Calling down bricks from the sky, you can drop a handful of blocks on unsuspecting enemies, or use the Power Gear to kick this weapon into overdrive, increasing the number of blocks that rain down on your foes.

A nifty new addition to Mega Man 11 makes selecting weapons easier than ever. While you can still pause the game and select the Robot Master weapon you want to use from the menu, a quick flick of the right stick in any direction will reveal a weapon wheel, allowing you to simply tap the right stick in the direction of the weapon you want to use, equipping it instantly! It’s a great way to stay in the action while switching weapons on-the-fly.

Next up is Fuse Man, a powerful speed demon who resides deep within a treacherous power plant. Unlike Block Man’s stage, which is filled with falling objects and heaps of pits, the challenge of Fuse Man’s stage is the ever-present threat of damaging electrical beams and devious high-voltage floors.

Starting off among power lines with electricity crackling all about, you’ll certainly have your work cut out for you if you want to unplug this Robot Master. Glowing electric panels can cause some major damage if you’re not careful, while rooms full of laser beams threaten to bring an early end to Mega Man’s quest. Fortunately, utilizing the Speed Gear can help you identify laser patterns and give you a bit of breathing room as you jump along hazardous blocks, allowing you to figure out each room’s peculiar patterns and find safe spots from the laser light show going on around you.

However, part-way through the stage, a massive mid-boss threatens to put a stop to your progress altogether! With lasers shooting down from above, electric nodes scattered about, and projectiles flying around, you’ll have to figure out how to bust this mid-boss as you dodge its onslaught of attacks. While the Speed Gear can help you dodge incoming lasers, well-timed use of the Power Gear can help you score a quick knockout before things get too out of hand. Double charge Mega Buster while the Power Gear is activated to fire two huge blasts for massive damage. Once you’ve braved the rest of the power plant, you’ll be up against Fuse Man himself.

Fuse Man is impressively fast. He zaps around the room flinging electricity at Mega Man, challenging you to predict where he’ll go next, and making it difficult to get a shot in with the Mega Buster. The real challenge begins when this already swift Robot Master activates his own Speed Gear, zipping up to the top of the screen before crashing down in a burst of electricity. Even the odds with your own Speed Gear to avoid his attacks, then unload your Mega Buster when you’re outside the blast radius.

If Fuse Man ever gets the upper hand and you’re reduced to critical health, Mega Man has one emergency ability he can unleash: the Double Gear technique. Utilizing both gears at once, Mega Man can slow time to a crawl and overcharge his buster, allowing him to unleash a massive, powerful shot! You’ll need to make it count, though – once the Double Gear is active, you can’t turn it off, and after it’s ended, Mega Man will be severely weakened until he’s completely cooled down.

No matter how you defeat Fuse Man, knocking his lights out will equip Mega Man with Scramble Thunder, an electric attack that can be fired up or down and zips along floors, walls, and ceilings to deliver a shocking blow to any enemy it touches. Activating the Power Gear increases the size and allows it to pass through enemies!

All-in all, the new Double Gear system combines with classic gameplay to give players of all types a wide variety of tools to use in their fight for everlasting peace. From those who are brand-new to action platformers to veterans who have been there from the very beginning, anyone can enjoy Mega Man 11 thanks to a comfortable range of difficulty options. For a true hardcore challenge, the game can be completed from start to finish without ever using the gears once!

You can pre-order Mega Man 11 today on PlayStation 4 for some extra bonuses as well! All pre-orders will include in-game alternate soundtrack DLC so you can groove through stages with remixed music. And, in celebration of the 30th Anniversary of Mega Man, pre-orders on PlayStation Network will also include an amazing interactive Mega Man theme created by Truant Pixel. Set within Dr. Light’s iconic lab, this theme is packed with plenty of nods to the Blue Bomber’s escapades over the years.

Mega Man 11 comes to PlayStation 4 on October 2, so mark your calendars and gear up for classic platforming action!