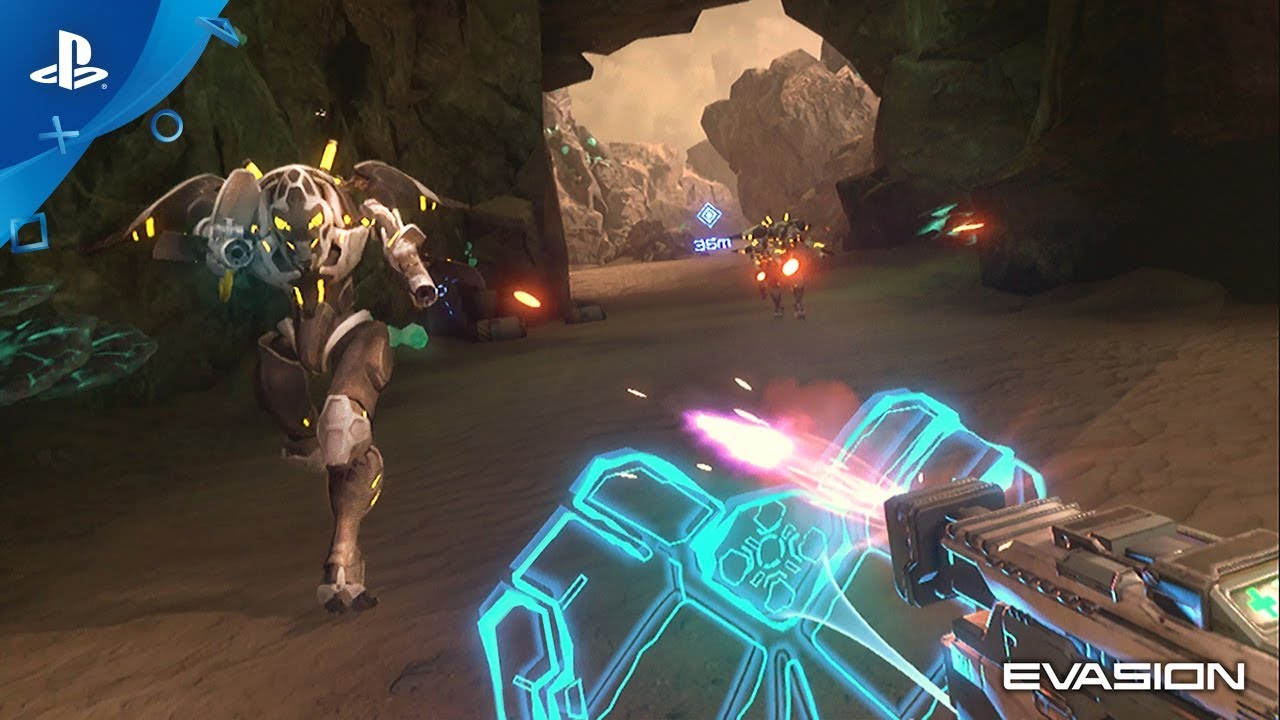 Play as one of four unique hero classes in this FPS built from the ground up for virtual reality.

The Evasion team is focused on one big goal: to offer a shooter designed for VR that delivers on everything we love about FPSes. We want to evoke that fast, frantic feeling that you get from games like Doom and Borderlands where you’re ducking behind cover to avoid a barrage of attacks, laying down suppression fire as your teammate hacks a gate, or racing down a corridor with enemies around every corner. After almost two years building our dream game for VR, we are delighted to announce that Evasion is being released on PlayStation VR, with custom support for the Aim Controller.

Evasion was built from the ground up for full locomotion – getting around is so core to the game, it’s even in the name! When designing movement options, usability testing and really listening to player feedback has been key. No single movement scheme works for everyone, so we’ve made sure that the game has all kinds of options for different players and is totally balanced, no matter your preferences. We’ve tested with so many players that we’re confident you’ll find a locomotion option that works for you. We’ve also designed custom rifles for the Aim controller, so holding it in your hands and feeling the intense haptics brings a whole new level of immersion to the experience.

Evasion evokes the feeling of a ‘bullet hell’ shooter, so it’s packed with intense battles. Victories in our game are hard fought. Major engagements in Evasion aren’t one-on-one affair where you sit back and slowly pick apart an enemy’s defenses; they’re tense and chaotic, requiring you to run and dodge and take on multiple enemies simultaneously. It definitely nods to some of the old school arcade shooters like Space Invaders and Galaga, but designed for full VR immersion and AAA-quality graphics powered by the Unreal Engine.

Evasion was designed to be played either solo or co-op, and features both a full Campaign as well as a Survival Mode, where you face escalating swarms of enemies. You play as a member of the Vanguard, an elite special operations team who are charged with saving an embattled human colony from swarms of invading Optera. The Vanguard have four playable hero classes, each with their own unique full-bodied avatar, weapons and special abilities.

Evasion is a passion project and we’re incredibly thrilled to bring it to PlayStation VR fans. We truly believe there is nothing like it on the platform and hope that gamers will love it, especially when elevated to the next level on the Aim controller. It’s been an incredible ride so far. We’re so happy with the feedback we’ve received, and we can’t wait to deliver this game to all VR fans later this year.

We want to hear from you. Got a question about Evasion’s classes or locomotion options? Drop us a comment in the space below, we’d love to hear your thoughts.