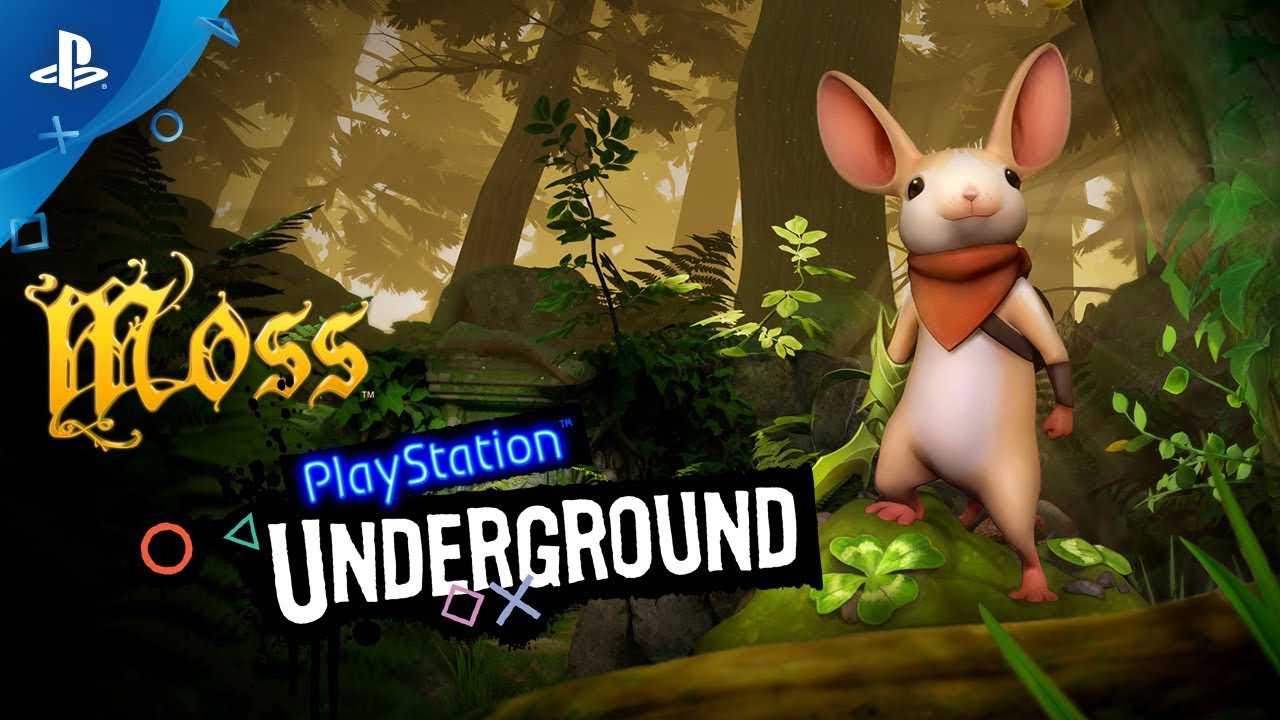 We play Moss and talk to the passionate team behind it (and its impossibly adorable hero). Plus, new wallpapers and an iOS sticker pack!

Since its first reveal at E3 2017, I’ve been completely enamored with Moss. Polyarc’s debut PS VR adventure casts you as Quill, an adorable (and exquisitely animated) miniature heroine in a lush, foreboding fantasy world.

I had the chance to play through a new area of Moss recently, and I’d like to share it with you in our newest episode of PlayStation Underground. Watch the video above, then head over to PlayStation Store to preorder Polyarc’s debut title ahead of its upcoming launch.

Moss is the first title Polyarc is releasing as a studio, but the team’s individual members have a wealth of industry experience — around 12 years per member, on average — across a broad variety of disciplines. Despite their diverse backgrounds, a common thread running through the Polyarc roster is their focus on characters.

The studio makes it look almost effortless, but a lot of work has gone into making Quill a character players instinctively care about. Things like the sense of scale in each area, the believable way Quill reacts to situations, and how players can interact with her all play a part. At certain points in the game, Quill will communicate directly with the player using ASL!

Since she can only squeak, I figured I'd play around with ways she can communicate with the player. Also a great perk for our deaf players. pic.twitter.com/BAiPc8CUMO

So which came first, the gameplay concept, or its impossibly adorable protagonist Quill? “We didn’t want to make the player move around a lot, so we wanted to build a game where everything is happening in a reachable space,” said studio director Tam Armstrong.

“For the concept we had, that meant that the character needed to fit within arm’s length. A small character resulted from that, then it was a question of ‘how do we theme that?’ That’s where Quill came from.”

Quill is on the way to add a little cheer to your chats! iOS users can head to the App Store starting right now to download a new iMessage sticker pack.

The positive public reception to Quill herself after her E3 debut has made Polyarc take a second look at where they’ve been focusing their development efforts: “We had theories about VR game design from a mechanical perspective,” Tam explains, “but once we started making the game and this small character we surprised ourselves with how strongly we felt about her.

“Having that reinforced by the response from our audience just affirmed it, and development shifted to focus on her and the things she does. We have things in the game now that we weren’t planning to do, but that we felt needed to happen after watching people interact with her at E3.”

One example of this is being able to wave at Quill (by physically waving your controller in the air) and having her wave back. A tiny touch that some might not even think to try, but one that adds a real sense of believability — that feeling of immersion creators have been trying to perfect since VR first hit the scene.

Head to Polyarc’s online store to download a set of beautiful new wallpapers for your desktop or mobile device.

One of the first things players tend to point out after playing Moss is how excellently animated Quill is. Watching her struggle to clamber over obstacles, or timidly unsheathe her sword in the face of looming danger, or even just look toward you with a confident nod is enough to make me want to protect this adorable little hero with every resource available to me. The work of Polyarc’s lead animator, Rich Lico, has a lot to do with the bond players feel with Moss’s petite protagonist:

The response to Polyarc’s work so far, and in some cases Lico’s work specifically, has been overwhelmingly positive. The team wisely strives to channel that energy back into the game.

“When I come into work I’m not thinking about what people’s reactions are going to be, so when I see them I’m just blown away,” Lico says. “Especially with the sign language community, when we put out that tweet and it got such an emotional reaction, it really touched me and motivated me to want to come in and do better.

“I’m just super thankful that I’m able to do this for a living,” he adds, “and that people appreciate what we do.”

It’s clear from playing Moss and speaking with its creators that this is going to be a special kind of adventure, and the team at Polyarc is equal parts anxious and excited to finally send Quill out into the world. But Stephen Hodde, audio lead on Moss, feels that the project is already a success.

“I never felt like I was taking a big risk, honestly,” Hodde admits, to the surprise of everyone else in the room. “The risk is going to a place that doesn’t have heart. We’ve already succeeded, in a way, because we’re making something that is heartfelt.”