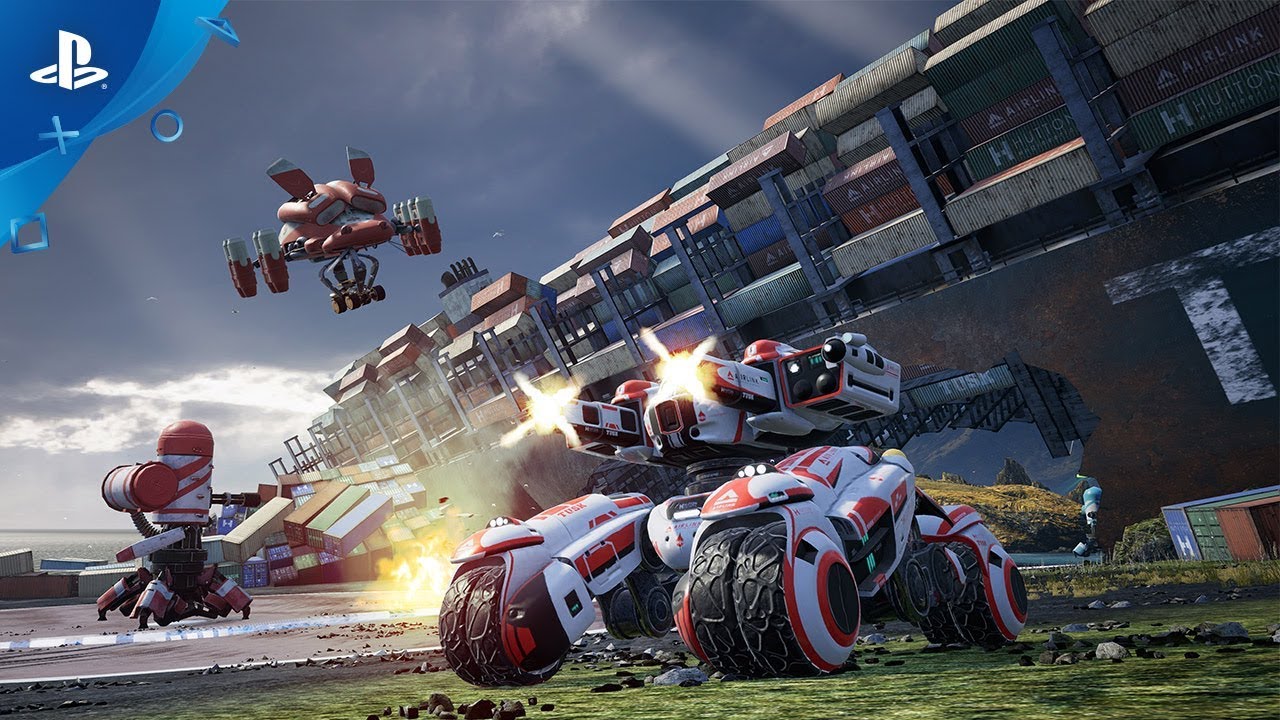 Switchblade is an intense high octane action combat game with an ever shifting array of strategic choices as the battle unfolds. Switch seamlessly between different heavily armed vehicles on the battlefield to create endless tactical choices.

The closed beta opens to players on January 22nd and will only be available for a short period of time, so make sure to sign up here.

For those of you who are unfamiliar with the game, we have a short Q&A below with Switchblade’s Project Director (Jeff Lewis) and the Creative Director (Craig Howard).

How would you describe Switchblade to a newcomer in a single sentence?

Craig: You play in a team of five and you just have to take out the rival teams bases to clear a path to their core before the time is over then it’s a knockout and you win the game.

What are the rules in Switchblade?

Jeff: You must disable the towers first by escorting exploding mobs to them, but the enemy team has the same objective. Everyone can take two vehicles into a match and switch between them at any time by calling a dropship.

Where did the idea for Switchblade come from?

Craig: We wanted to push the concept of vehicle combat games further than anything out there. The idea of a vehicle-based sport where strategy, as well as reactions, was key to winning and our focus as we feel compelling sports need both of these.

What kinds of strategies tend to be most effective during a Switchblade match?

Craig: The vehicles all have a unique range of skills that are better for different roles such as support and attack. As the game progresses it really does pose different strategic challenges for the team, such as when to defend or when to just hold ground. We have been playing the game internally for over a year, and even now no two games are ever the same. The range of tactics and action is something we are really excited about.

Why did you decide to have cars be able to switch roles at any time?

Craig: Switchblade is not just a three-minute-a-round game. With the constant ebb and flow of the battle, we felt that it would be more exciting for the player to be able to switch their vehicle as they switch tactics and weapons.

Why did you decide to go free-to-play?

Craig: It is a risk for us, but with Switchblade we want to create a new sport, and going free to play takes down any barrier for gamers to play our game. Even PlayStation owners who don’t have PS Plus can go online and play competitively. I must stress that it is not pay to win — skill is the only currency that you need to win a season in our game.

Who, or what, inspired you creatively while working on Switchblade?

Jeff: A lot of guys at Lucid used to work at Bizarre Creations, and the last game they worked on there was Blur. At first, we were considering a sort of a sci-fi update of that. Slowly, and from very small beginnings, it’s evolved into what we have today. Almost all that’s left from those days is that you drive a vehicle, it can shoot and you can switch to a different vehicle at any time.

What’s next for Switchblade?

Jeff: More vehicles are coming really soon. Further down the line are more maps, more game modes, and our own little twist on audience participation.

How are you looking to capture E-sports fans’ attention?

Craig: E-sports are something that we are very interested in supporting with Switchblade. It is a game based on pure skill and great teamwork. However, we cannot just assume it will become a popular E-sport, that is down to the players and its popularity. In the meantime, we will support it by featuring special broadcast modes so people can commentate on the action — along with some other features that we are not revealing yet.

When will Switchblade leave beta?

Craig: We are aiming for the end of Q1 2018, although like any beta we will be listening to the players and refining the game as we go along.

We’ve only scratched the surface on what’s available in Switchblade. You can find out more by signing up for the closed beta today. Be on the lookout for exciting content updates and new maps coming soon!