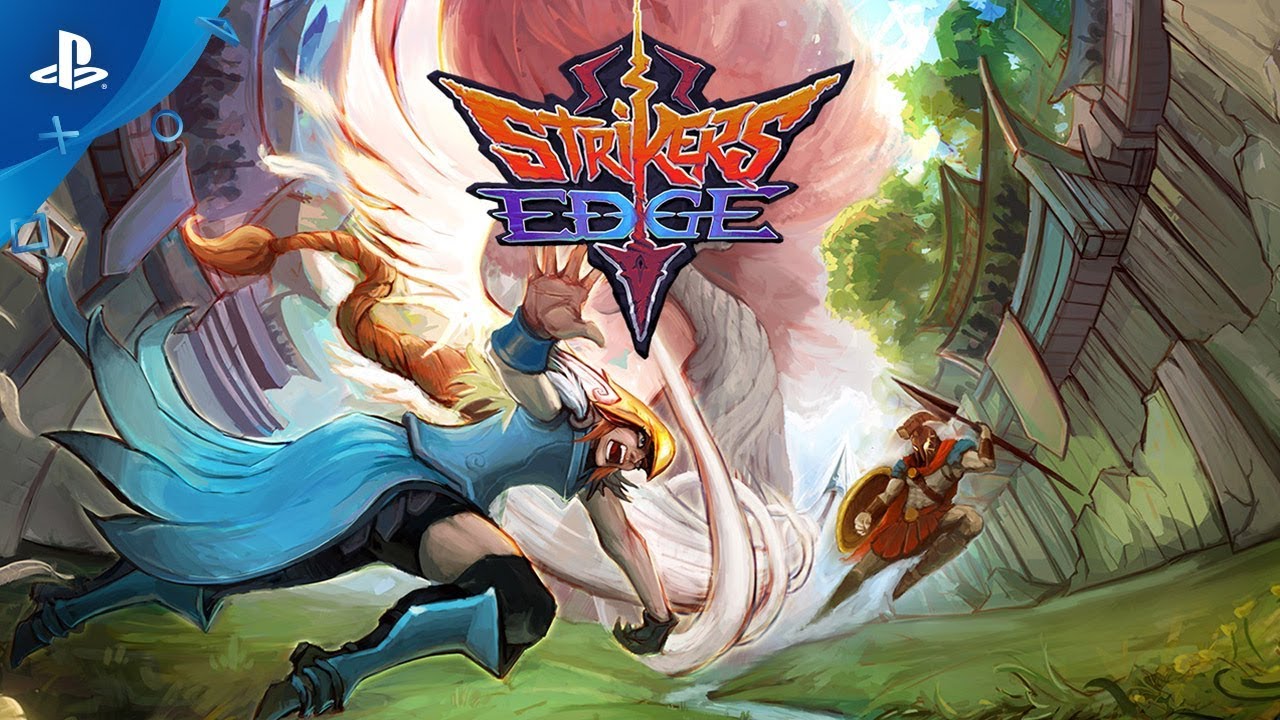 If that headline doesn't sell you on this game, I don't know what to tell you. Out January 30 on PS4.

Strikers Edge was originally born from a “game development marathon” hosted at the Lisbon Global Game Jam back in 2014. It was raw, unpolished and ugly, but the main mechanic was there: shooting weapons at each other to take down your opponent.

We saw its potential at the very beginning; it felt unique and easy to pick up, while offering an almost hidden complexity that versus fighting games usually offer. But above all, each match felt intense. With so much going on, every spear shot and skillful dodge felt like a clutch moment.

Moving forward with the concept required us to think everything through. In this PlayStation.Blog post we’ll talk about two of the many, many aspects we improved since that game jam back in the day: the gameplay and the theme, while designing for intensity.

Strikers Edge is a versus game that thrives on clutch moments and the intensity of each match. We wanted to maximize these feelings to provide “WOW” emotions and moments. We always came back to the wow moment that was Street Fighter 3rd Strike’s “Moment #37” and asked ourselves: “Can Strikers Edge provide even a small amount of the feeling this moment is about? Even for less technically experienced players?”

We had an idea that was able to provide its share of wow moments: slow-motion. It works simply by momentarily slowing down time when someone is about the get a fatal hit.

This ended up working great for multiple reasons:

This is where mind games come into play!

On top of the slow-motion mechanic, we added other little interactions that ended up adding to the game’s intensity potential. Here are just a few examples:

Yet, for Strikers Edge to be as intense as we meant it to be, we had to find a theme for our game that would frame everything.

It was clear from the beginning that ranged combat was core to the game. We wanted to make it somehow physical, making the player feel like every hit made a difference. Most of all, we wanted Strikers Edge to feel intense. Guns wouldn’t cut it, since bullets travel too fast and we needed something that was slow enough for players to dodge.

The answer was obvious: the first prototype had spears, so it felt natural to keep going with ranged and melee weapons. Everything from axes, spears, javelins, shuriken, knives, even stones, among others, made it to our list of possible weapons. With this list we immediately started thinking about all kinds of warriors who could use these in combat, as well as what kinds of unique abilities they would have.

This stage of development was super fun and it would have been easy to get carried away and lose focus, so we established a theme: medieval fantasy.

It’s a theme that can host lots of different kinds of warriors without them feeling out of context. You can imagine a Ninja fighting a Viking and find it much more credible than, say, an Egyptian warrior against a modern-day Marine.

We were quite happy with the theme and intensity the characters, their potential background and their weapons could bring to the fray.

With the medieval fantasy theme sorted out, it became easier to come up with and justify characters, abilities, events, locations and everything about the world.

Looking back, I’m proud of the team here at Fun Punch Games and the progress we’ve made. We hope you’ll enjoy playing Strikers Edge as much as we enjoyed making it. Here’s to clutch moments and those “WOW” feelings that have kept us gaming and creating. See you online when Strikers Edge launches on January 30.