From defying gravity to battling your nemesis, these are the systems that got creators hyped

While story, characters and visuals are all key components of what makes a videogame memorable, it’s their core mechanics and gameplay systems that make them fun – and 2017’s release roster offered fun in abundance.

To celebrate the last 12 months’ embarrassment of riches, we wanted to call out the systems that have wowed players over 2017 – and what better people to ask than the expert developers who have crafted some of PlayStation’s games over the past 12 months?

“I loved playing around with this and ‘flying’ through the world.” Hermen Hulst, Co-founder, Guerrilla Games (Horizon Zero Dawn)

“I know it’s technically not a new gameplay mechanic, as it was the star of the first instalment of the series, but it’s still awesome. The addition of gravity styles means you get to play around with some new tricks. Roaming through the floating city really gives me the feeling of freedom every time.” Michał Dobrowolski, Senior Game Designer, CD Projekt Red (The Witcher 3: The Wild Hunt, Gwent) 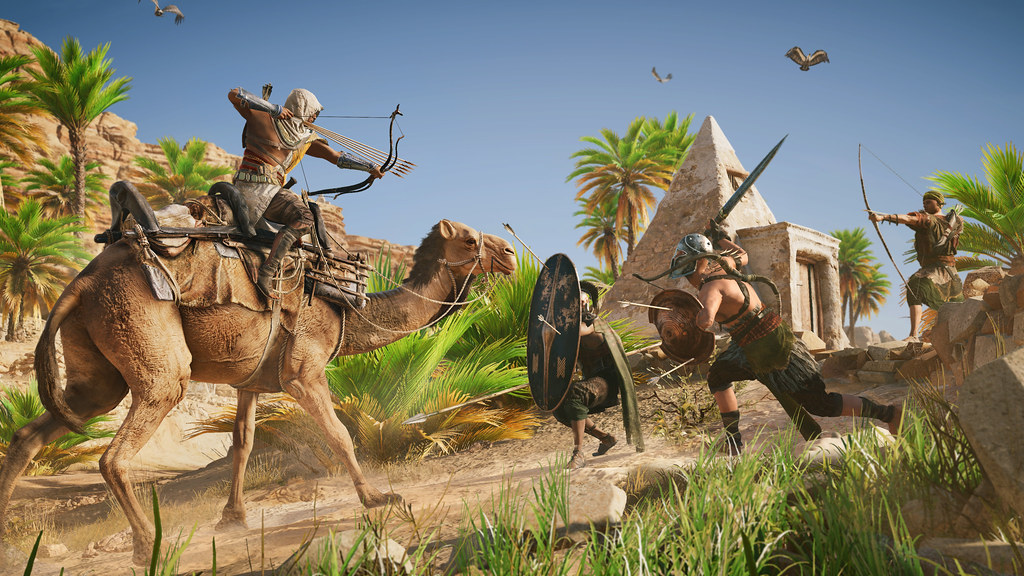 “My favourite part was the system that allowed you to walk along with cats. Also, the quality of the action surprised me. Although the combat and animation have always been high-quality, the latest title raised the feel and touch of the controls to the next level, yet I feel that people didn’t recognise these improvements.” Fumihiko Yasuda, Director, Team Ninja (Nioh)

“Being able to enjoy the world of Assassin’s Creed Origins through the air with the eagle or in auto-walk mode on the camel’s back is brilliant. The world is the star of the game and this allows you to enjoy it even more. No limitations, just pure freedom.” Damien Kieken, Game Director, Ubisoft (For Honor)

“Having things change from shoot ’em up, to a 2.5D platformer, to an open-world 3D RPG. I can’t remember ever having played a game that not only deftly switched between completely different genres of games, but that did each of them so seamlessly and to such a high level of execution that I would totally have played each of them as a standalone game.” Jeramy Bergerson, Associate Producer, Arkane Studios (Prey)

The upgrade system of Nier: Automata

“There have been a few games that have made me put the controller down and simply admire the ingenuity of the teams behind them and this year that game was Nier: Automata. The way the game contextualises upgrading 2B, 9S and A2 through the chip system and the way that thread carries throughout the game was a masterstroke. Game mechanics and story coming together to create this near-perfect whole.” Brad Davey, Lead Designer, Sumo Digital (Snake Pass)

“Driving the go-carts in Everybody’s Golf. I spent way too much time just running into other players, I’m surprised they didn’t ban me. I’ve since learned to drive responsibly and respect others.” John Johanas, Director, Tango Gameworks (The Evil Within 2)

“Horizon’s stealth mechanics are very gratifying, I love sneaking around in the tall grass, scanning enemies to identify weaknesses and setting up traps to take them down like a total badass. Triggering slow-mo whilst jumping and take down machines with the bow and arrow are easily my favourite moments in the game.” James Valls, Senior Producer, Rebellion (Battlezone, Sniper Elite 4)

“Argh! I hate it when developers do this in interviews, but honestly, I love the core mechanic in That’s You! When we hit upon the idea of asking players questions where they themselves are the answers, it was just immediately brilliant. It’s so simple and pure, and usually hilarious to play with friends. We regularly laughed ’til we cried while play testing it at Wish, and there aren’t many games you can say that about.” Capsar Field, Wish Studios (Knowledge is Power!)

“It is blowing my own trumpet somewhat, but I would say the double-speed mode in Final Fantasy XII The Zodiac Age. Previously you have had to accept that you need to invest a lot of time to play an RPG, but I would like to brag that with the double-speed mode we put in, you can play in a pleasingly speedy manner!” Hiroaki Kato, Producer, Square-Enix (Final Fantasy XII: The Zodiac Age)

“There’s so much to love and applaud with that game but the Dark rot visual and what it stands for in terms of game-over was very well executed.” Gavin Price, Creative Lead, Playtonic (Yooka Laylee)

The Nemesis system of Shadow of War

“The new Nemesis System in Shadow of War, hands down. In all its complexity and – let’s not ignore it – cruelty, the dimension of your actions echoes all over Mordor.” Raul Rubio Munarriz, Director, Tequila Works (Rime)

“It was impressive to see a bigger, more extensive version of Shadow of Mordor’s Nemesis system in 2017’s Shadow of War. Controversies aside, the Nemesis system seems like a great addition to improve players’ experience in a sandbox game. Watching people playing Shadow of War, I couldn’t help but wonder the possibilities of those mechanics applied to other major sandboxes like Grand Theft Auto, Red Dead Redemption or Assassin’s Creed.” Román Echevarrena, Producer, RecoTechnology (Numantia)

“We may be a bit biased given that we developed Hidden Agenda, but PlayLink’s ability to offer new design opportunities to developers and open up gaming to new audiences, meant it was my favourite.” Steve Goss, Director of Design, Supermassive Games (Hidden Agenda)