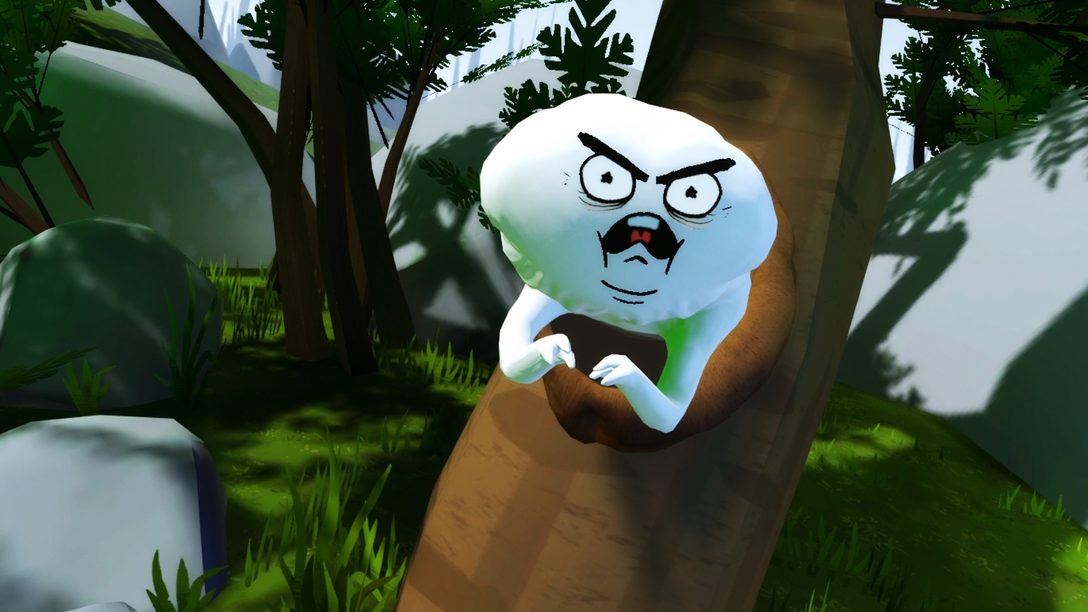 Things are about to get weird. Accounting+ launches next week on PS VR.

Dive into layer after layer of VR madness with Accounting+, brought to you by Rick and Morty co-creator Justin Roiland and Crows Crows Crows designer William Pugh.

Accounting+ features instruments made out of human remains, dark secrets, demonic summons, and an angry Tree Guy. I will be honest when I admit that I don’t understand what this game is about. I encourage you to play it instead of reading this text.

For a full list of new games out next week on PlayStation, read on. And enjoy The Drop!

In this procedurally generated platforer, you have to avoid deadly lasers, circular saws, and spikes to collect all the Fragments and get their greatest gift. Do you have what it takes to collect them all?

With 3D Billiards you can enjoy the ultimate billiards and pool experience in the comfort of your own home! Step up to the virtual table and show what you can do with a cue!

Accounting returns to its roots with Accounting+, a nightmare adventure comedy made by Crows Crows Crows and designed with Squanch Games! It’s got the guy who voiced Rick and Morty — for real this time!

Cat Interstellar is a short story-driven science fiction game about humanity’s attempt to terraform Mars. Play as a DOG V4 drone, a newly activated maintenance bot who is assisting in the terraforming effort.

Defunct is an indie adventure game with a focus on flow, speed, and an engaging world. You are a broken robot that accidentally falls out of a giant cargo ship onto a post-human Earth, now inhabited by robots. You have to get back to your ship before it’s too late!

Jump into the hot seat of a combat helicopter and fly behind enemy lines under heavy fire as you search and rescue hostages!

Gunhouse is part puzzle, part active tower defense, as you make big combos to launch a hail of bullets and special attacks at the alien invaders who would like nothing better than to consume your delicious orphan friends.

Transport yourself to the land of Greek mythology on a RollerCoaster ride you’ll never forget.

Scan, serve, and pack produce whilst shooting guns to defend your store from mutant fruit! Shooty Fruity is a multi-tasking shooter only possible with PS VR. Can you do your job as a sharpshooting shop clerk during the heat of combat?

Outfight the enemy with your own army of foot soldiers, tanks, helicopters, tactical vehicles, and fighter jets. Capture rival territories and extend your military power over the sprawling map of Zipang.

Ultrawings is the first aerial-themed, open-world game where you’ll pilot multiple aircraft to complete a variety of missions across an island-themed world.

VirtuGo is a classic puzzle game. Colored tiles come at you nonstop, and you must put them on your carrying platform and arrange them as best you can on a 5×5 grid. Have fun!

Xenon Valkyrie is a rogue-lite platformer game with RPG elements in which you must fight to the deepest part of a moon and halt the plans of a wicked witch.

Battlefield 1: They Shall Not Pass (Original Game Soundtrack) – Johan Söderqvist and Patrik Andrén