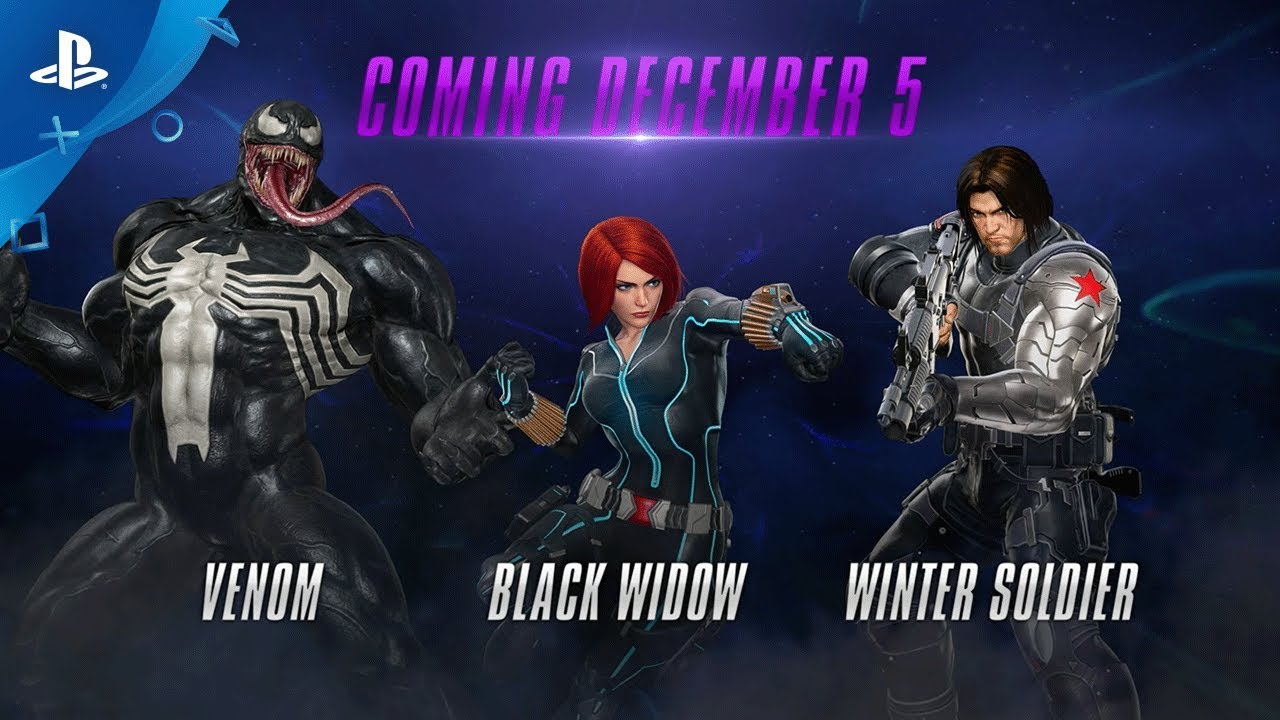 Unleash mayhem with a trio of new combatants.

Alert, PlayStation Nation! We just received intelligence that a soldier, a spy, and a symbiote have set their eyes on Marvel vs. Capcom: Infinite. Your mission is to watch this action-packed gameplay trailer to prepare for the upcoming DLC characters Winter Soldier, Black Widow, and Venom, all available on December 5!

Young soldier Bucky Barnes fought alongside his best friend Captain America during World War II. Presumed dead after a dangerous mission ended in tragedy, he was captured by enemy forces and secretly brainwashed into becoming a deadly assassin known as the Winter Soldier. Bucky, now free from his captors, is once again ready to fight for the good of humanity.

Winter Soldier excels at ground combat using special moves that send the opponent flying across the screen and projectiles that bounce off the walls and floor. Bucky can activate metal shield, which utilizes his cybernetic arm to turn him into an anchor, allowing him to ignore attacks without taking any damage!

Trained extensively in the art of combat and espionage and outfitted with state-of-the-art tech, Natasha Romanova is the super spy known as Black Widow. Dutiful and fearless, she is a master assassin who found her true calling as an Avenger. She now fights to protect the world from Ultron Sigma’s influence.

As a deadly spy, Black Widow has tools for every situation. Her unique acrobatic jump can be performed in mid-air and followed up with one of her many tricky projectiles with the press of a button. Natasha also showcases her skills in hand-to-hand combat with her trusty electric batons.

Blaming Peter Parker for the failure of his journalism career, former Daily Bugle reporter Eddie Brock bonded with a malevolent, symbiotic alien creature who had previously attempted to bond with Peter. United by the goal to destroy Spider-Man, they are the fearsome force known only as Venom!

Prepare for the unexpected with Venom’s shapeshifting abilities. As a frightening force on the battlefield, Venom can launch himself across all angles of the screen and has no issue manipulating the opponent’s options to favor his own.

Everyone who has the 2017 Character Pass will unlock access to Winter Soldier, Black Widow, and Venom on December 5 — along with the previously released Black Panther, Sigma, and Monster Hunter. Each character is also available for purchase individually.

All 30 launch characters will be available to play, meaning you’ll be able to witness Captain Marvel’s strength, Dante’s style, and much more. There’s plenty of time to see which characters and teams speak to you along with which Infinity Stone you’ll choose to bring into battle.

Be a hero and tell your friends and family to check out Marvel vs. Capcom: Infinite! We’ll see you — and them — in the epic clash!