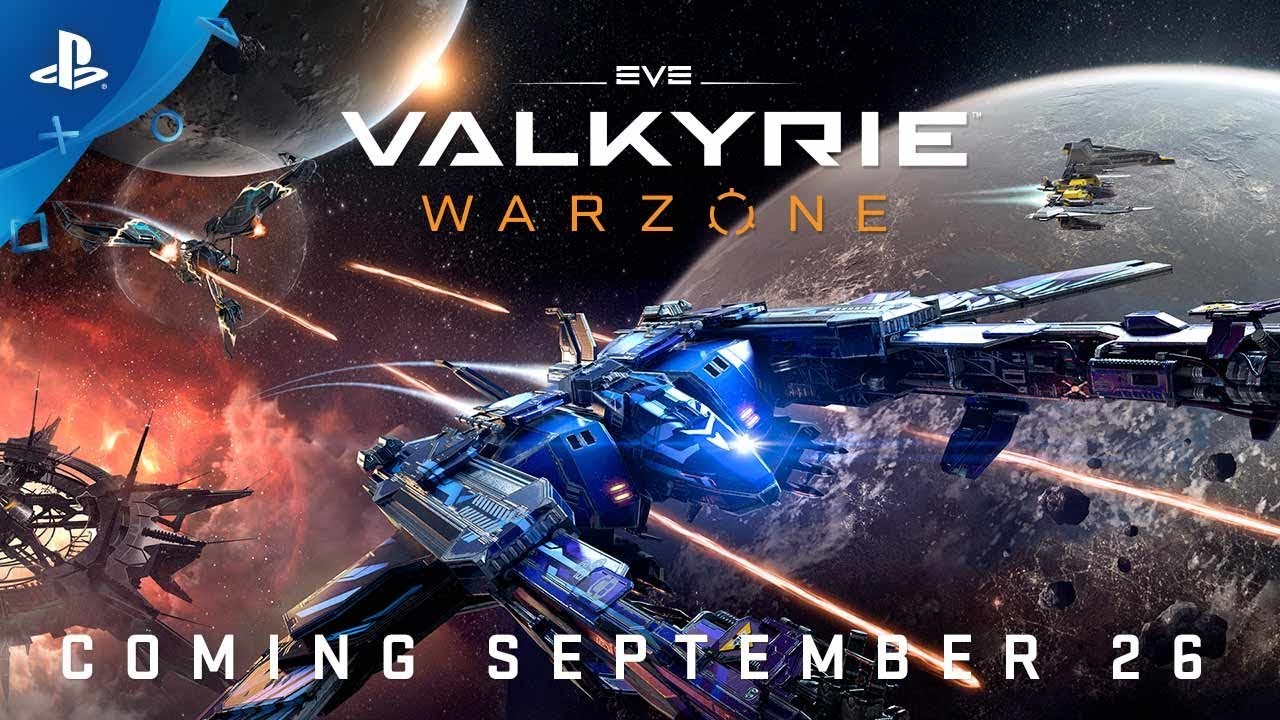 The Warzone expansion introduces a huge range of exciting new features, with the biggest game changer being support for both standard and VR gameplay. PS4 and PS VR gamers will be able to fly and fight alongside each other in EVE: Valkyrie – Warzone, both in and out of virtual reality. We look forward to seeing the already intense competition between Valkyrie pilots going up a notch, as more players from around the world will be able to join existing pilots for all-action space-dogfighting battles.

But that’s not all – not by a long shot. This expansion is a complete overhaul for the game, making EVE: Valkyrie – Warzone an entirely fresh experience. Better yet, it will be a free download for all existing Valkyrie pilots, with the complete package coming down in price to $29.99 SRP for new recruits.

Set against the glittering darkness of space in the unforgiving corner of the universe known as New Eden, EVE: Valkyrie – Warzone is a visceral and immediately accessible first-person spaceship shooter, where you can jump straight in and heroically turn the tide of battle. Guiding you through your Valkyrie journey is Rán Kavik, leader of the Valkyrie, brought to life by critically acclaimed actress Katee Sackhoff (Battlestar Galactica, Longmire).

The cockpit of your spacecraft is an immersive bubble and your window onto a battlefield among the stars. It’s from here that you’ll enjoy multiple competitive multiplayer modes, co-op and squad-based gameplay as well as getting involved in Leaderboards and, later this year, Leagues.

Choosing from one of the four distinct ship classes – Assault, Heavy, Support and the all-new Covert class ship, the Shadow – your awesome vessel becomes your avatar, where using the intuitive controls to combine great firepower with agility provides genuine tactical depth. When chasing the thrill of victory, just remember that your next kill – or death – may lie above or below as well as behind you.

EVE: Valkyrie – Warzone brings with it enhanced and refined gameplay features across the board.

Each ship within a class will have a more distinctive role to play in battle and all ships will be available from the first time a pilot enters the Clone Vat. This new, open hangar will allow pilots to experiment and find the ships that best fit their playstyle within a few matches.

There will be new weapons and abilities to inflict upon each other, including powerful ship-specific Ultra abilities that, when timed correctly, can turn the course of battle. Ultras facilitate a deeper combat experience, being fuelled by the performance of you and your team.

Pilots will be able to explore a new modular progression system that introduces multiple new modifications for each ship. With unique abilities and meaningful upgrade paths for each ship, you’ll have more control over how you evolve and customise your fleet.

Warzone introduces the brand-new ‘Extraction’ game mode – think capture the flag in outer space – that mixes combat and navigational challenge in new and exciting ways, encouraging pilots to use the environment to their advantage. Most importantly though, it makes team-play – and team-tactics – a key component of success.

In addition, the Warzone expansion will also feature two new maps; ‘Fleet’, a Sisters of EVE space station, and ‘Outpost’, a mysterious Drifter base, that will bring even more aspects of the rich EVE universe to the world of the EVE: Valkyrie. There will also be new weekly Wormholes to fight for, where established reality is twisted for a fresh gameplay experience.

In Warzone, we’ve simplified EVE: Valkyrie’s previously complex in-game economy with the removal of Gold and the reduction of surplus Silver. You’ll earn XP per ship and use only XP to craft a Modification for that ship, which is far easier to follow. Salvage picked up during a battle by you or your team now has a more immediate effect by fuelling your ship’s Ultra gauge.

You can also fight over Spoils of War to earn Reward Capsules, enabling you to unlock a hangar-full of personalization options for your ships and pilot. Each item rewarded is categorised as Common, Rare or Epic to convey its sense of worth and desirability, plus a random element ensures that the content of each capsule remains a surprise.

EVE: Valkyrie – Warzone is for everyone. If you can play first-person shooters, you can pilot one of Warzone’s amazing ships. Not having access to VR hardware will no longer hold you back from diving weapons-first into intense and highly competitive space combat with your friends. It’s fast, it’s fun and there’s a ship with your name on it.

Fly safe and fly together!