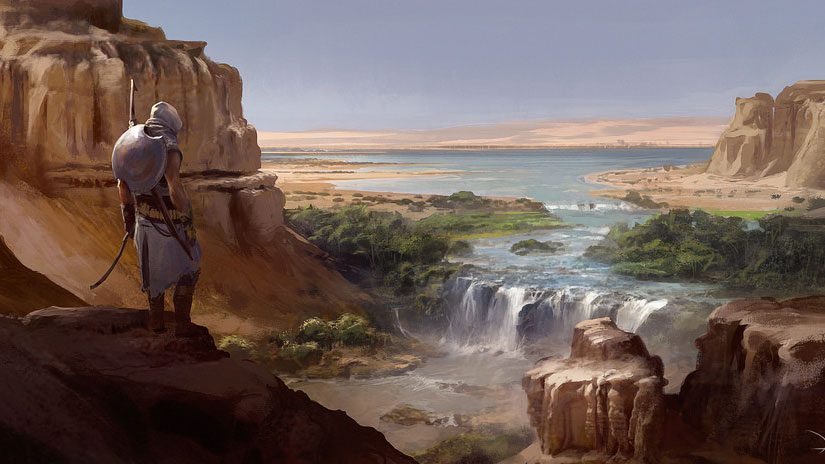 There’s a routine that Irish comedian and Go 8 Bit presenter Dara O’Briain performed a few years ago that’s always stuck with me. It touches on the idea that the average person’s worldview becomes rapidly simplistic the further afield any country in question is from them; a rich culture of peoples and lands boiled down to two or three basic concepts.

As technology progresses and access to the globe and its multi-region, multi-cultural histories are a mere touch screen away, it’s a routine the grain of truth in which gets more shameful as the years past. We should know – I should know – more about our neighbours. And I’m not talking about the ones you can wave at from your backyard.

So, you say Egypt, and I think two things: deserts and pyramids. Admittedly a pair of defining features to the region, but not the sum total of its parts. Hence I stopped longer than should have been necessary outside Ubisoft’s E3 booth, drinking in the beautiful banner for Assassin’s Creed Origins that hung overhead.

It showcases new lead Bayek astride a camel to one side. But both are but a minor detail as the eyes soak in not only the lush valleys, rivers and towns, but also the diversity of colour that dominate the landscape shot.

The time-travelling series has always used its setting primarily to have an eye-catching locale for its adventurous romps of silent takedowns and multi-century warring of opposing factions.

But that fiction has always been built on the foundations, and fought over the rooftops of, real-world history. Or at least a close approximation of it.

However small, there has been an educational element to these time hops – Jerusalem, Italy, Paris, London – with the studio(s) behind them rendering the time and place with as much authenticity as possible.

“You don’t have to pay attention to your level of hydration,” states Guesdon. “You don’t need to drink; but you will experience a bit of hallucination, because of the heat. And so we have what we call this desert overheat system that will make things appear, so it’s always interesting to go there.”

“When we started to dig into it, to learn about it, to study, reading up and meeting Egyptologists, we realised quite soon it’s way more than deserts and pyramids,” acknowledges creative director Jean Guesdon when I catch up with him in the booth proper. Though out of sight, we’re standing only a few feet away from that banner. “Still today in the 21st century, this is a place in time, in the world, that triggers a lot of fantasies. It’s a lost world, a forgotten world.”

The research that followed is possibly the most intensive any team tied to the Assassin’s Creed franchise has had to do, as, Guesdon freely admits, “very few things remain today” of what was there at the time that Origins is set.

“The beauty of that is it allowed our artists to recreate it,” he continues. “It’s more a recreation… we have no maps, no plans, as to how it was. We have a good idea. And so really we’ve put our efforts into recreating mostly the atmosphere… you have the Mediterranean sea, you have the Nile river, you have mountains, deserts… the beauty of this world is that it’s already rich with almost 3000 years of history.”

Guesdon and his team at Ubisoft Montreal – and aided by Ubisoft Singapore – have crammed in all that history into a gigantic map. They started with the bigger picture, then worked downwards, “from global to detail” as the director puts it.

The studio first dropped in simple grey boxes, travelling between them at the speed of a horse to fine tune the volume of content and make sure its deployment of population centres stayed consistent with the real world location.

The map was then divided up between teams. Each used concept art as reference to define its region’s mood, lighting, materials, vegetation, fauna. To echo Guesdon, to “recreate the atmosphere” rather than duplicate what was there.

“Where do you find the verticality?” asks Guesdon rhetorically. “In Egypt, what we did was that all rock formations, for example, are climbable now. So it’s not only limited to cities, or locations. We have big cities, villages, camps and now all these mountains & rocks that you can climb.”

In previous Assassin’s Creed titles, it wouldn’t be unfair to say most players look for the nearest high point of the map and make a beeline for it. In Origins however, vertical isn’t as prominent, or as important, as the horizontal.

You take a quick sip of the landscape. Then, thirsty for more, you trek into the great unknown. Not surprisingly, given the team behind it is also responsible for Assassin’s Creed: Black Flag, journeying to the distant horizon is a richer and more intriguing experience than gaining an overview from on-high like an eagle.