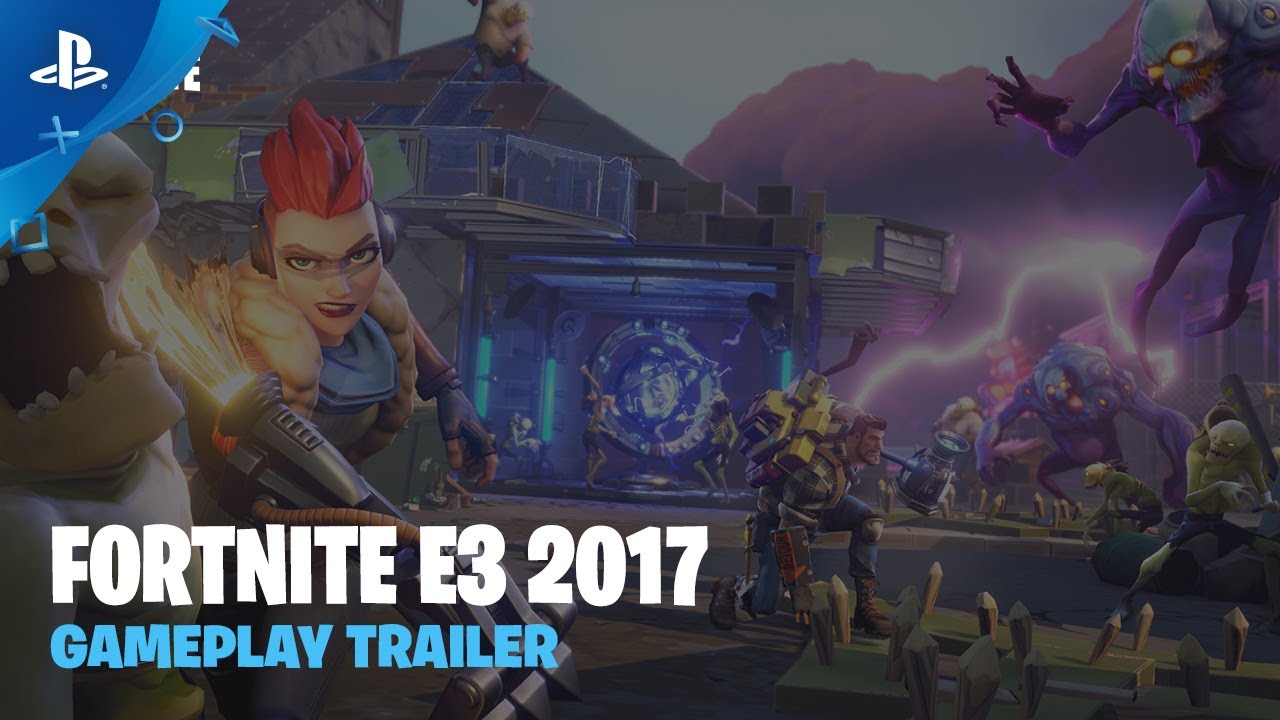 The storm is coming. Build your team and prepare to save humanity in Fortnite.

Fortnite is coming to PlayStation on July 25. Build huge forts, craft exotic weapons, find loot, and level up your squad while leading the world’s remaining Heroes in the fight to save humanity and take back the world. You can watch our brand new gameplay trailer to get a feel for the game and even pre-order a Founder’s Pack. In addition to the Founder’s Pack, we’ll be offering PlayStation-exclusive hero cards only available to players on PlayStation 4. These special cards sport a unique color scheme designed to show off your Sony pride.

The Soul of Fortnite

Everybody loves building forts. Whether it was blankets and couch cushions, or building a fort in the woods by your house, you and your friends could spend Saturday afternoons hiding out, or repelling monstrous hordes of imaginary creatures. This idea is universal. It’s everywhere in stories and movies. It’s Harry Potter defending Hogwarts from Voldemort’s army, and Aragorn, standing against the orcs at Helm’s deep. This idea inspired the rich, colorful world of Fortnite, where you and your friends are Heroes, building forts and making a stand against hordes of monsters, and of course, blowing them up.

The world of Fortnite is expansive and uses a hybrid of procedural generation with sculpted “puzzle pieces” to create interesting play spaces to explore. Almost anything can be harvested for loot and materials, and used for for crafting. Build the equipment you need, when you need it. Knowing when to spend your hard-earned resources is part of the strategy of mastering the world of Fortnite.

Let’s talk about the rewards you get in Fornite. (Everyone likes to get stuff right?) Fortnite takes a bunch of Epic’s gunplay know-how and smashes it together with a Diablo-style RPG system. We have a solid assortment of guns: sniper rifles, rocket launchers, lasers and shotguns galore all in your favorite rarity colored flavors. We also have a pile of close-combat weapons that range from claymores to katanas and my favorite: the rocket-powered sledgehammer. Along with weapons, players are also able to collect and recruit Defenders. These are specialist NPCs that help you hold the line against the Husk hordes.

Building in Fortnite is designed to be usable before combat and in the heat of battle. Need to throw up a quick wall? It’s a tap and a trigger away. Want to build more impressive structures? The editing tool puts the power of building customization in your hands, choosing between fences, windows, stairs, ramps and doors in your fort. Fortnite buildings can also be built from three different materials with different properties: wood, stone, and metal. Building coupled with the ability to craft a whole host of deadly traps, can eliminate creatures before they can even get to your Fort’s walls! It’s up to you to decide which one to use in a pinch.

Last, but certainly not least, is classes and combat. Players collect hero cards drawn from a pool of four core classes:

These classes gives players certain edges in the fight to retake the world from the monsters. A well-balanced team can nearly always save the day, but mix-and-match different specialties to find all new effective combinations. Combat is fast and chaotic in Fortnite, with a diverse groups of monsters, trying to overwhelm you with hordes of Husks, or even flinging themselves onto the roof of your fortress in an attempt to burrow from above. You’ll have to utilize all the tools in your toolbox to be successful at the top end of gameplay in Fortnite.

That’s only the tip of the iceberg of all the things Fortnite has to offer, and as an online game we will be adding new content monthly, with events, new heroes, new creatures, traps, and weapons. Fortnite is designed to continue to be built with the community, and represents a multi-year commitment from Epic Games. If the players want more Fortnite, we will keep making the world bigger, with big new features and gameplay types.

We are about to enter into a new phase of development, where PlayStation 4 players can be part of the paid Early Access. It is our intent that Fortnite will evolve into a free-to-play title during 2018. However, we wanted to give people the opportunity to gain Early Access to the game along with exclusive items and in-game events that come only with the Founder’s Early Access.

So if you want to come hang out with some cool folks, get tons of cool loot, and help make Fortnite more awesome … jump on board and help us build the community. Still not sure? That’s cool too. You decide when you want to jump onto the train. We mean it. No BS. We will be here when you are ready to build killer forts with your friends!

Questions/comments? Come hang out with the team. They’re awesome, and they love making games for you. I’m really proud of the all the people who have contributed to the world of Fortnite, (devs and the community) and I’m really looking forward to more people taking back the world and making it their own!