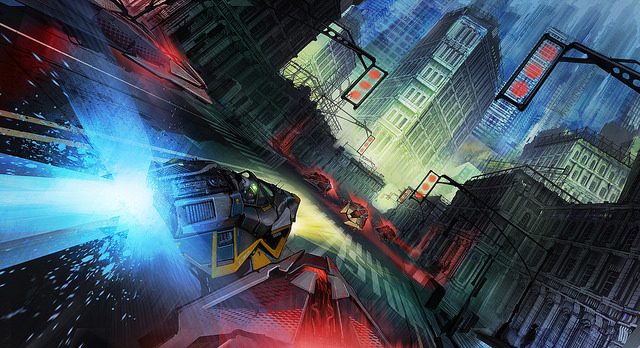 Ease the days remaining until the launch of Wipeout Omega Collection with a gallery of wallpaper-friendly concept art.

When WipEout Omega Collection launches next week, the iconic PlayStation franchise will be nearing its 21st anniversary. Yet even at over two decades old, the racing series still exudes a futuristic sheen that is entirely unique, entirely its own.

To celebrate the upcoming release, former artists from the franchise unearthed just a sampling of their visionary concept art that informed the final games from across the series’ entire span. You’ll be able to see even more via the digital artbook that releases alongside WipEout Omega Collection next week, but for the moment let the artists behind those works walk us through the stories behind 25 pieces of previously unseen concept art…

“This was sketched with pencils, then colored in Photoshop. It appeared on a billboard in WipEout 2048, as an ad titled ‘Real Replicant’. The basis was our resident WipEout pilot (ex-community manager) Ami, and the costume she’d crafted herself. Genius.”

“Another piece of art from WipEout 2048. Not the first time we sketched the backend of a ship racing down a track. Not the last either. Again, this was a pencil sketch given color in Photoshop.”

“Another pencil/Photoshop job. We were looking to give all our pilots cool backstories, and this was a potential explosive tale captured via a single, cover-style, image.”

“At some point – maybe prior to WipEout 2048 – we had this idea of street racing on bikes through regular traffic. This moment captures those bikes roaring past a big-ass container wagon.”

“This piece was created around 1997. We hadn’t highlighted the pilots and their ship interiors much in promotional material (or indeed in-game), so we thought it’d be fun to give a glimpse inside the ship, and whipped up this concept of an in-fiction promo shoot.”

“Showcasing one of the cooler moments that comes from anti-grav racing: you’d race up the side of that big ol’Feisar tower building.”

“This may have been for a poster, definitely around the Fury era though. The initial idea was the Zen/Fury concept, but we didn’t quite nail it.”

“Circa 2003. It wasn’t a piece assigned to anything particular, more as a tester as we got to grips with Painter [program]. God, they’re horrible pastels, aren’t they?”

“This was a render for WipEout Fusion. Look closely and you can see why Nat’s biting her lip – the reflection of the baddie in the canopy! You can blame Batman ’66 and Miami Vice for the garish colors, but you won’t get any apologies!”

“Another piece from around 2003. We were trying to capture the early days of the Anti-Grav Racing League, and the wider WipEout world. A desert race seemed cool, and I’d been watching the bionic man and wanted to do pilots in a dry lake setting.”

“A rather neat robot design that we used for the WipEout space in PlayStation Home.”

“A concept, similar to the idea of street bike racing, that was envisioned in this energetic piece, of big wheeled cars rolling through traffic. It never got greenlit, but did get a nod eventually in Wipeout 2048’s intro movie.”

“Playing around with the environment as we got to grips with Painter back in 2003/2004.”

“This had nothing to do with WipEout, believe it or not. But the idea – huge floating whale-like spaceships – was so strong that the original doodle sketched during downtime became a more fleshed out piece of art!”

“We spent a lot of time messing about with the final look of the start grid. This is just one of many concept pieces showcasing the structures that pop out of the track to hold the ships as well as the ground crew.”

“We were actually coming off F1 in the studio, hence the racing girls. The rain? We wanted to test WipEout out with a lot of different weather conditions (plus, I’m not a huge fan of summer)!”

“This is from WipEout 2048, as we wanted to contrast the shiny chrome of the WipEout ships with the dankness of the old city’s underbelly, as the course plunges you through this trackside history lesson – if you had time to look!”

“More exploration of the wider WipEout world, as a flatbed hovertruck showcased the winning ship. As for the cheerleaders, well, guess they stuck around a bit longer after F1 after all.”

“Two (in-fiction) years before WipEout 2048! Using real world scale allowed us to show how the tracks would stack up against – and run along – New York buildings.”

“One of a series of images showing how a normal NY street would be kitted out for the WipEout street race, with these big buggers laying down track pillars (and yep, that’s a misquoted Clerks reference on the banner).”

“Nothing like a bit of vertigo to stir the senses! Not only did it give a sense of scale to the city beyond, it was also a nod to an older piece done around 1997 that messed with the horizon perspective as well.”

“Again an early 2048 exploration, showing the real world around the track – the human scale. And I couldn’t resist a reference to that classic photo of the working men eating lunch on a girder. This is what they’re watching now.”

“We played around with the idea of an interactive comic called Wipeout Chronicles, which would shed some light on the backstory of WipEout’s founder.”

“Fun fact: WipEout 2048, for a short while, was going to have a zombie mode. It was a half-joke, a tongue-in-cheek nod to the endless ‘zombie’ modes in other games. We didn’t get time to perfect it though so we removed it. The shot was a mixture of renders and FX slammed together in Photoshop, with most of the street lights taken out to have lower key lighting so it’s even moodier than usual.”