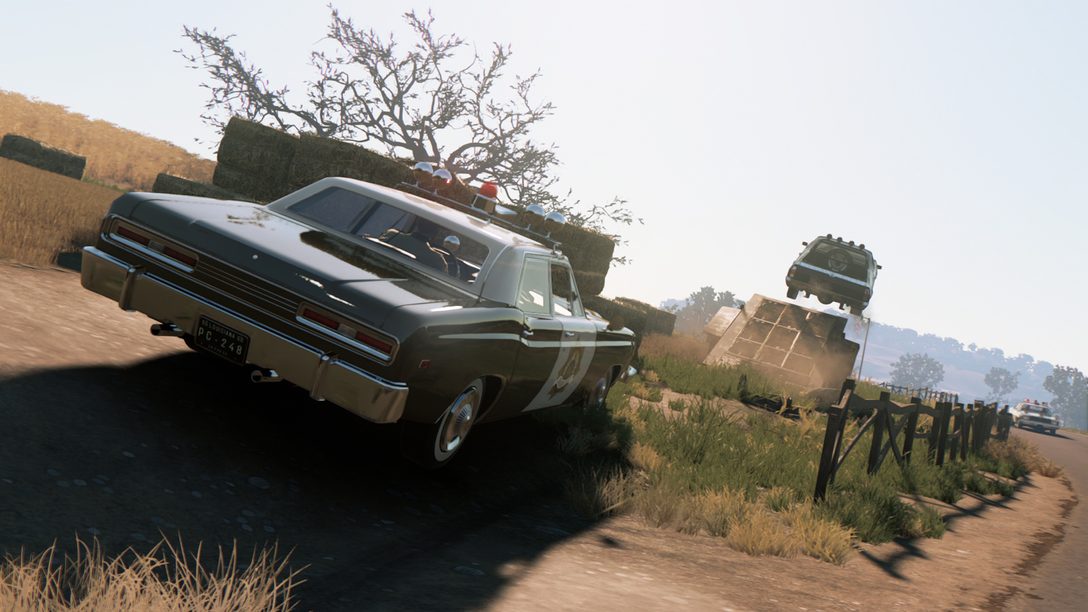 It’s time to pack your bags and get back to New Bordeaux!

When we shipped Mafia III last fall, we were humbled by the community’s response – so many of you really dug into Lincoln’s revenge story against the Marcano crime family. But if you missed out on the gritty tale before, now’s your chance to check it out for free.

Today we’re introducing a story demo for Mafia III that lets you enjoy a little bit of southern hospitality for yourself. The demo includes the entire opening act of the game – centering on an incredible bank heist sequence – which sets the stage for the rest of the Mafia III story. Discover Lincoln’s history with the mafia and witness firsthand the catalyst for his pursuit of revenge against the Italian Mob.

It’s available right now for free download, and your saved progress will transfer to the full game.

“Faster, Baby!” takes place alongside events in the game, but in an entirely new area with new gameplay experiences. A civil rights leader is murdered while investigating small town corruption in Sinclair Parish. Other activists are next on the list, and it’s up to Lincoln and Roxy Laveau to get to the bottom of what’s happening on the outskirts of New Bordeaux.

To get some behind the scenes perspective, Senior Writer Ed Fowler talked with us briefly about his favorite parts of the “Faster, Baby!” DLC.

When you first came up with the idea for the story for “Faster, Baby!” what were some of the inspirations?

EF: One of the major things we were trying to do in “Faster, Baby!” was channel that classic muscle car chase movie vibe. Lots of classic – and modern – movies served as points of inspiration along the way. We also pulled from real world events to reinforce the time and place of the story. We clearly personify this in Sinclair Parish’s top law man, Sheriff Walter “Slim” Beaumont. So combining these influences, one being what we refer to as Hollywood action driving, and the other being a strong sense of time and place, formed the perfect core for the story that grew into what is now “Faster, Baby!”.

This is a different kind of experience than the main Mafia III game. What was the biggest thing that sets this apart?

EF: With “Faster, Baby!” we were looking to tell this badass, standalone story that teams Lincoln up with someone who you quickly realize can hold her own and then some. So for me, the biggest impact, in gameplay and in a story sense, is the introduction of Roxy Laveau. Lincoln and Roxy meet under less than ideal circumstances, but as the story unfolds, they push past any misconceptions they might have of each other as they make their way through Sinclair Parish.

Let’s talk about designing Sinclair Parish for driving sequences and how to make it seem natural. What should people look for in the environment?

EF: I grew up in a small town in Ohio, so I understand the type of layout you should expect from an area like Sinclair. And I think the design team did a fantastic job of making the entire parish feel connected. One of the most effective ways we achieved this was placing these amazing billboards throughout the parish — from the farm country, to the town square and letting you slam your car right through those things. It’s an absolute blast to drive through them – especially the ones with Slim’s face plastered across them. So keep your eyes open for anything that can potentially be a ramp. And when you do find one, crank up the radio, hit that ramp full speed and have a blast.

What is your favorite part of “Faster, Baby!”?

EF: I love cruising around Sinclair with the Sheriff’s Department on my tail and hitting crazy jumps at full speed. I’m so happy we were able to expand on Lincoln’s story and introduce people like Roxy and MJ into his life. His relationships with them over the course of “Faster, Baby!” reminds us of that warmer side of Lincoln Clay.

Can you give fans a tease of what to expect in the next DLC, “Stones Unturned”?

EF: Oh, man. I am so stoked to get Stones Unturned out there to the fans. You’ll get some insights into what makes Donovan tick, and discover what motivates the man. And while I don’t want to give too much away, I can say that Lincoln and Donovan running and gunning side-by-side is a force of nature I would not want aimed at me. Those two can do some damage.

Remember: As the story of “Faster, Baby!” unfolds, you’re unlocking new cars for tooling around New Bordeaux, new outfits and new gear for taking down Slim – as well as the Marcanos. So, if you’ve never played Mafia III, now’s a great time to get a free look into Lincoln’s world with the Mafia III demo. And if you’ve already played the game, we’ve got more great content coming.