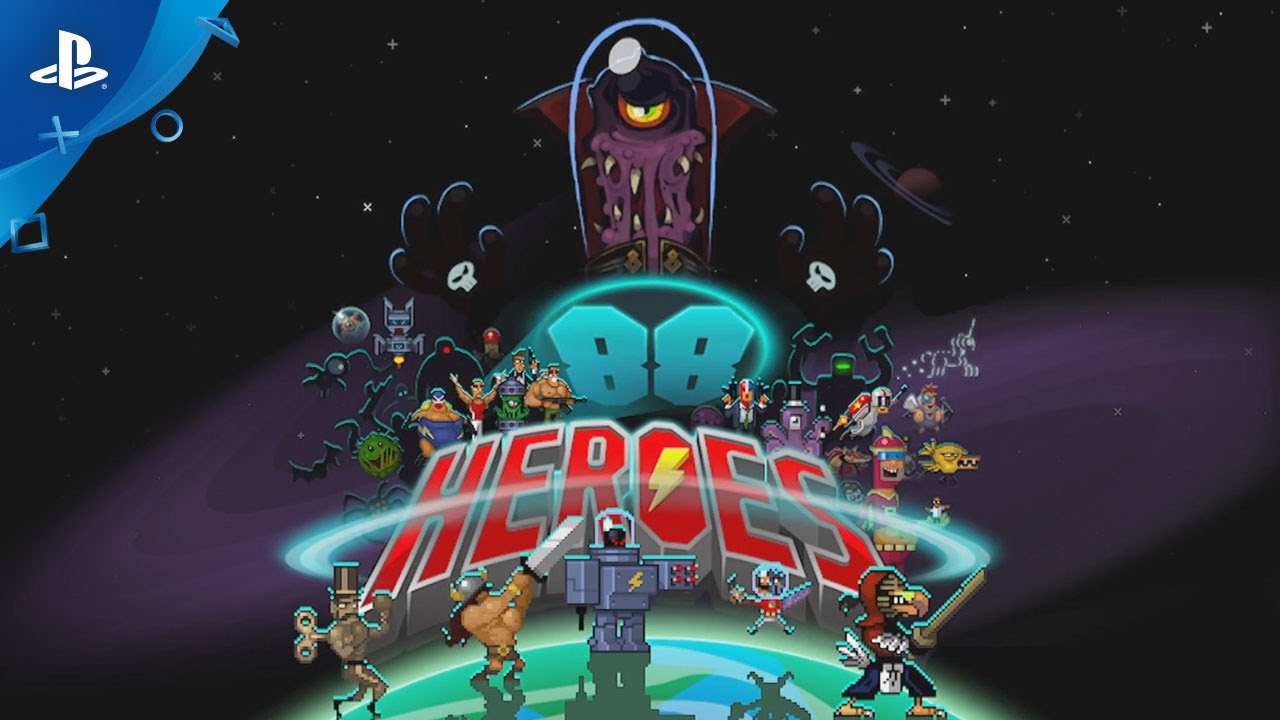 Yes, there are 88 playable heroes ready and willing to help you save Earth from the nefarious Dr.H8.

“88 playable characters? Are you crazy?!” is probably what we should have asked ourselves before we started work on 88 Heroes. But no, as with most of our previous games, we were determined to bring something new to the genre we were tackling, even if it was almost commercial suicide and would push the development team to their limits!

88 Heroes is our third platformer. We’ve also had success with Super House of Dead Ninjas, a game with a multitude of weapons available to the player and each one affected how you played the game. It was largely this that inspired us to create a game where it was the heroes themselves that changed the gameplay, rather than the weapons.

A few games had touched on similar concepts before, such as The Wonderful 101, Broforce, and Rogue Legacy, but none of these forced the player to constantly change characters every minute or so and adapt to their new abilities.

The game itself is a 2D platformer played against the clock where each completed level or untimely death brings a new hero into the fray. Dr.H8 is holding the Earth ransom, threatening to destroy the planet in 88 minutes if his demands aren’t met.

Players can’t hang around if they want to complete all 88 levels before the time limit expires. Of course, this means you’ll have to complete each level in an average of one minute to stand a chance of stopping Dr.H8, so taking shortcuts and using ingenious methods to traverse the levels is highly encouraged and almost essential!

Coming up with 88 different heroes was a considerable challenge. Although there are a few heroes with overlapping abilities (such as running, jumping, and shooting), we wanted to include as much variety as possible so that players would be pushed to learn new techniques and think outside of the box. For example, Retro Reptile controls just like the old Nokia mobile game, Snake. Booster Goose will feel familiar to fans of Asteroids, and Toxic Snot pays homage to Wizball. Of course, every hero had to be capable of completing every level, so we had to take particular care with the level design and testing, with Captain Colossus causing us a lot of problems purely because of his height!

Although the core team had many years of game development experience behind them, 88 Heroes was the most ambitious game any of us have worked on. Making a platformer in and of itself is far from trivial, but creating a game with 88 playable characters rather than just one or two was insane!

Each hero had to be prototyped before any art or audio could be produced, with the artwork in particular being a massive undertaking. Some heroes had particularly complex abilities, too, which would take days or weeks to get right. It was only when we had something like 10 heroes in the game that the concept began to shine through — jumping between heroes every time you finished a level or died helped keep the game fresh, and you never knew which hero you’d end up with next.

So, why 88? There were many times during development that we considered changing the number to something less daunting, such as 77, 66, 44, and I’m sure there was even talk of 22 at one point!

I always had a fascination with the number 88, going back to my teenage years when I used to play Area 88 on the Super Famicom, and the number was also on my car license plates from back in 1999. Crazy fact of the day: I imported an FTO to the UK after becoming hooked on Gran Turismo, without even taking it for a test drive! I have since grown up and am far more sensible now.

Fortunately development continued to go well; all 88 heroes and levels eventually made their way into the game with the fun increasing the more we added. So much so that for the boxed PS4 version we’ve added two more heroes and eight new levels in a special H8 Mode that is particularly taxing even for experts! Having spent two years making this game, we’re thrilled to finally be able to release it and see other people playing it.

We’ve had a GR8 time making 88 Heroes, and we hope you enjoy experiencing all the 88 heroes and discovering some of their hidden talents! We asked Dr. H8 for a parting thought…

“Get outta my face, human scum! I despise your puny planet. Extinction is imminent, so enjoy the very last pointless moments of your pathetic lives!”