Bioware’s shaking things up for Mass Effect: Andromeda, the first PS4 installment in its spacefaring action-RPG series. The game’s setup represents a clean break from the original Mass Effect trilogy, taking place 600 years later in another galaxy as a crew of explorers searches for humanity’s new home.

Despite the shift in time and place, Mass Effect: Andromeda retains all the signature elements that propelled the series to fame. You’ll assemble an all-star team of adventurers; explore exotic locations both beautiful and hostile; pore over rich, detailed fiction; engage in thought-provoking conversation with an ensemble cast of colorful characters.

So what’s new, then? Much to my delight, I found Andromeda’s action to be faster and far more ferocious, with tighter gunplay and more responsive handling. Two new maneuvers — a boost jump (X) and an evasive dash (Circle) — lend a more kinetic feel and allowed me to quickly reposition mid-battle or move in for the kill as the situation dictated. Based on what I played in the first four hours of the game, I’m betting that this combat overhaul will greatly expand the game’s appeal.

Andromeda’s biotics also benefit from a more muscular approach. As series veterans will recall, biotics are superhuman powers that can drag enemies out of cover, unleash energy blasts, and so forth. Bioware has reworked how all the various powers and abilities interact with each other, creating a reworked “combo” system that proved to be one of my favorite additions to Andromeda’s gameplay.

Most offensive abilities are considered either “primers” or “detonators,” and Andromeda’s UI includes a handy graphical icon to help you tell the difference. Deploying a primer skill, then landing a follow-up detonator attack will trigger a combo and inflict more damage on your target. 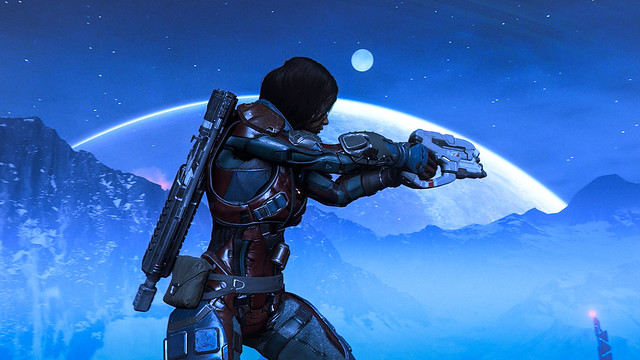 That means you can grab an enemy with Lift (primer) and follow up with Concussive Shot (detonator) for a huge damage boost. Other interactions can unleash more exotic effects; detonating a Cryo Beam attack can trigger an icy nova effect that chills nearby enemies. Better still, combos can be primed or detonated by either you or your AI squadmates. There’s plenty of room for improvisation!

Some of the new abilities caught my eye, too. On the Biotics side, Lance fires a precise energy shaft that can inflict huge damage on enemy weak points and detonate combos, while Backlash can reflect some incoming attacks if properly timed. New Tech skills include a Flamethrower that can set enemies ablaze, and an Invasion ability that weakens enemies with a swarm of small robots. For Combat skills, the Flak Cannon and Tripmines add an extra offensive punch.

On a related note, Andromeda abandons formal character classes, instead adopting flexible skill “profiles” that empower players to adapt to individual challenges. Given the tighter action and new primer/detonator combos, this seems like a smart move to me.

I noticed a host of subtle gameplay refinements as well. Taking cover is now a smoother, contextual process that doesn’t require a button press. Healing and resupplies seemed to be handled by grabbing pickups located in the environments, versus fiddling in a menu to find that Medi-Gel.

Outside of combat, my experiences with Andromeda demonstrated plenty of promise. With Commander Shepard out of the picture, newcomers Scott and Sarah Ryder make for capable protagonists. A species of brutish tyrants called the Kett appear to serve as the core antagonists, with much of the conflict revolving around an ancient alien relic called the Remnant.

Later in the demo, I took control of the Tempest, Andromeda’s answer to the Normandy, and spent a few minutes bonding with its crew. My highlight was Jaal, a soulful alien with a mysterious past touched by the Kett. I’m betting he’ll quickly become a fan favorite.

True to Mass Effect form, the conversations were freewheeling, philosophical, and deeply fascinating. It’s worth noting that Andromeda replaces the Paragon and Renegade conversation options from prior games with new conversational “tones” — emotional, logical, and so on — that can influence the direction of conversation. 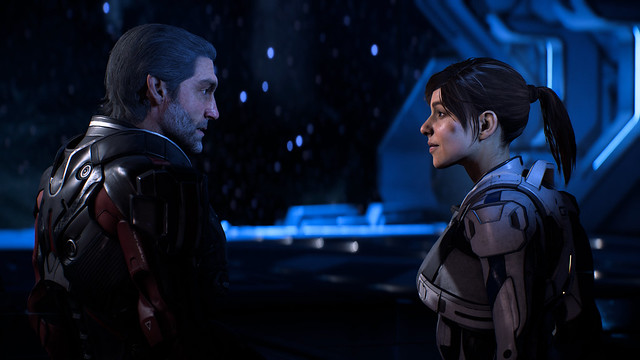 After my chat, I landed on a new planet and explored the Kadara Market, a seedy hive of villainy populated by spies and scoundrels. Then I hopped into an armored Nomad to explore the bleak surface of Kadara, carefully avoiding acid lakes and aggressive, raptor-like creatures.

These Nomad expeditions evoked the best parts of the Mako sequences from the original Mass Effect, but offered up far more environmental variety and interesting emergent combat encounters. At one point, I spotted a skirmish at a small outpost in the distance. I pulled up, jumped out, and helped some local fighters finish off a squad of Outcast Raiders. These scenarios aren’t quite open world, but they feel big, exciting, and brimming with possibility.

On a related note, exploration-minded players will love scanning objects in the environment, a new addition that’s used to solve puzzles, unlock new lore in the Codex, and earn research points for equipment upgrades.

For those wondering how much Andromeda will build on the story of the original Mass Effect trilogy, the answer appears to be: not so much. Since Andromeda is a major departure from the original trilogy, don’t expect to bump into Shepard or the Reapers. A Bioware rep did tell me, however, that eagle-eyed players may uncover a few narrative morsels that relate to that story. You won’t be importing past save files to carry on any narrative choices, either, as it doesn’t fit with the new protagonist and setting. 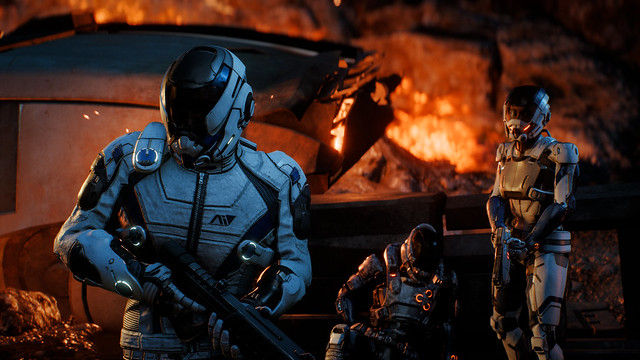 We also got a peek at the pre-release version of Andromeda running on PS4 Pro, where it will support higher resolutions as well as HDR features. The results were impressive — we’ll have more details to share there soon as we prepare for the game’s launch on March 21.

Have any questions? Let me know in the comments below!