Prey: 6 Things We Loved from the First 60 Minutes

In Prey, you’ll laugh at sharp dialogue, question reality, and fight for your life — all in the first 60 minutes. The team at Arkane (Dishonored) wants to enthrall you from the moment you wake up in the posh, sun-soaked apartment of protagonist Morgan Yu. Even as the story spirals into the abnormal, those opening moments will shake you, shock you, and even blow your mind.

Here are a few of the many things we loved about the first 60 minutes of Arkane’s sci-fi thriller, set to launch May 5 on PS4.

1.) The Whole Opening
Sure, we’re cheating a little with this one, but the spectacular opening sequence of Prey as a whole is enough to get serious hooks into you. As a new employee of the TranStar Corporation, Morgan Yu takes an helicopter ride through a dazzling cityscape to undergo routine testing at a facility operated by her brother.

But as you know, “routine” is hardly a lasting assurance, and soon the very nature of Morgan’s life and memory is called into question. Arkane crafts this entire sequence with aplomb, introducing a variety of gameplay mechanics while setting the stage for a mind-bending story to unfold.

2.) Even the World Has Something to Say
Environmental storytelling is an invaluable tool to video game developers, and the Arkane team has leveraged it with its latest campaign. Morgan can hack into terminals and read private email threads that reveal key events in the Talos I space station catastrophe. The station’s on-site museum outlines the history of the structure, complete with dramatic lighting and sparkling plaques.

Even the bodies themselves, frozen and twisted in agony, help craft the grisly story of TranStar and what’s at stake for the Earth below.

3.) Build Your Own Platforms (BYOP)
The crux of Prey’s gameplay systems? Empower you with as much choice as possible. This philosophy is exemplified in the GLOO Cannon, a device that fires a fast-acting, expanding adhesive. You can use this to slow enemies down and close the distance for a melee attack, or build platforms up to hard-to-reach areas. Or you can ignore the Cannon entirely.

4.) 0451
Yes, the legendary numeric string made famous by System Shock, Deus Ex, and countless others is on full display. Prey embraces its predecessors with a smile.

5.) The Mimics
The Talos I is consumed by a Typhon alien infestation. These dangerous, ghostly threats take many forms. Literally. The Mimic, a small creature with startling speed, can take on the shape of almost any object on the station. Now every discarded mug or small trinket could be danger in disguise. 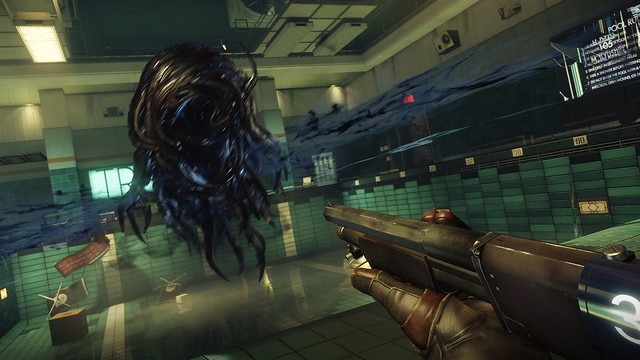 Morgan, as it turns out, can also unlock these abilities… for a price.

6.) Skill Trees
Expect to spend many wonderful, anguishing moments picking the perfect skill to unlock as you progress through Talos I. By finding Neuromod’s scattered throughout the environment, you can expand Morgan’s library of talents, from repairing broken elevators and turrets to hacking valuable terminals. The Arkane team wants to make sure that any choice you make is rewarded and valuable, with a variety of applications that fit any play style.

So by all means, swing that wrench until you’re blue in the face. Or slink down the hallways undetected. In Prey, you have all the choice in the world.

But that’s no guarantee you’ll survive it.