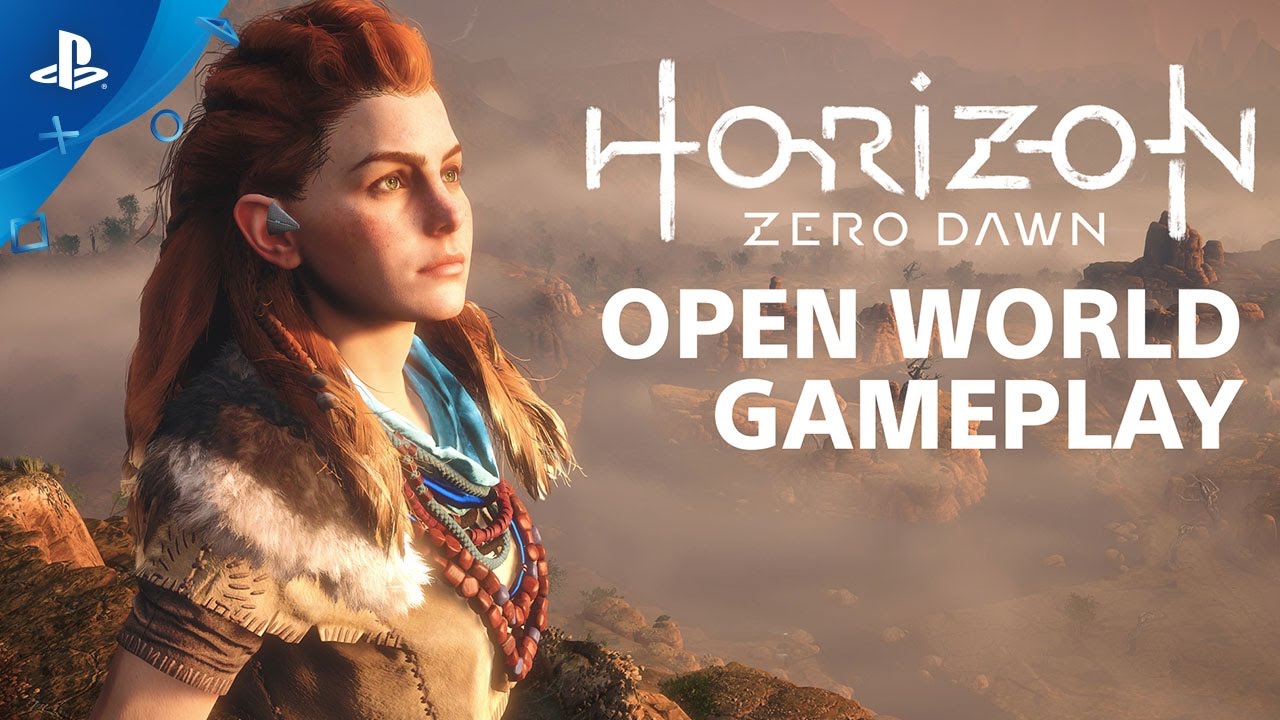 Ever since Horizon’s debut at PlayStation’s E3 2015 Showcase, Guerrilla Games has been steadily working towards its vision of a sprawling open-world action RPG set in a futuristic Earth ruled by towering machines.

Now that I’ve played the game, we’re seeing just how deep that RPG rabbit hole goes. And the answer is, pretty damned deep.

In picking up the controller, I was pleased to find a well-rounded crafting and equipment modification system, something we’ve only glimpsed in earlier looks at the game. By harvesting technology from downed machines, and looting or purchasing rare upgrade parts, I was able to customize a stealthier, more powerful Aloy that specialized in hit-and-run attacks and fire arrows.

A quick word about Horizon’s combat: it feels tight, responsive, and satisfying. Open-world games don’t always pack a visceral crunch, but I’m happy to report that Guerrilla has done their homework here. One-shotting a Watcher by drilling a well-paced arrow through its glass eye sent a shiver down my spine every single time. It’s a testament to Guerrilla’s long history in the FPS genre, and the tactile combat expands the game’s overall appeal immensely.

I was also heartened by the game’s colorful arsenal, which stands out amidst the me-too assault rifles and shotguns of so many other action games. In addition to Aloy’s iconic bow and arrow, I laid electrified tripwires, fired ropes to immobilize targets, and wielded a slingshot that launched powerful firebombs. These weapons all felt fresh, fun, and strategic, setting the stage for interesting emergent combat encounters.

I upgraded my weapons with mods that bestowed increased power, fire damage, and a stat called “Tear” that increases the odds Aloy’s attacks will knock valuable components from her mechanized enemies. And I harnessed specialized ammunition, from fire and shock arrows to ice bombs and more. Plenty to dig into there.

The game’s open-world RPG bonafides were on full display, too — NPCs doled out missions, merchants bought and sold gear, side quests speckled the expansive world map. I was surprised to discover a robust skill tree setup, which allowed me to further customize Aloy across three main pillars focusing on stealth, combat, and survival abilities.

Another surprise: early in the game, Aloy unearths a high-tech relic that can scan enemies, provide environmental information, and mark targets using a holographic-AR interface. The device, referred to as a “Focus,” can also download audio files from ancient high-tech ruins. These narrative bits provide players a bit of morbid context into humanity’s final days at the top of the food chain – I’m curious to see what we’ll find in the final game.

One moment that stood out particularly: jumping on and scaling the majestic Tallneck, an experience that evoked PS2 classic Shadow of the Colossus. They’re not just there for the view, either; the numerous tallnecks around the game world are constantly roaming and collecting terrain data. When Aloy overrides a Tallneck, she reveals a large swathe of the in-game map and unlocks points of interest the player might have otherwise missed. It’s a fun and rewarding mechanic that folds neatly into the world lore.

I’m interested to learn more about Cauldrons, high-level underground facilities that seem to serve as a breeding ground for the machines. Didn’t get much time to experience them, though they seem to be large.

Given Guerrilla’s well-known technical chops, it’s no surprise that Horizon is a feast for the eyes, serving up some of the finest visuals seen yet on PS4. Meanwhile, the PS4 Pro dynamic 4K presentation looked stunning, and appeared to be even more refined than its previous appearance during PS4 Pro’s September announce.

All in all, the game is looking promising, with a bit of something for everyone. Horizon is clearly Guerrilla’s most ambitious game – will it be its best as well? We’ll find out come February 28.