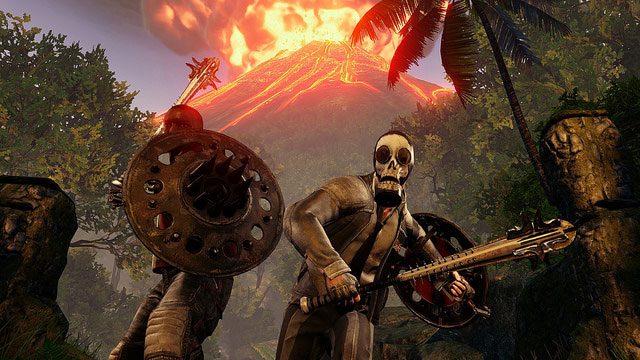 Here at Tripwire, we’re really excited to introduce you all to the first major free content pack for Killing Floor 2 on PS4: The Tropical Bash Content Pack.

At Tripwire we strongly believe in not splintering the player base by charging for map packs. This way we ensure that all players can play together all the time because they all own the same maps.

The update brings an all-new tropical map ZED Landing, plus the Bone Crusher, a brutal new Berserker melee weapon, and The Gorefiend, a devastating dual-bladed version of the Gorefast ZED to fight. In addition to this content, we’ve added a system that allows weapons to belong to more than one Perk class, which we’re calling the Dual Perk system. Finally, we couldn’t resist some hilarious all-new Emotes players can trigger in game.

ZED Landing is a beautiful new map set against the backdrop of a plane crash and a giant volcano. The volcano is not just for looks: it erupts during the battle and triggers a lava flow that enters the play space and can become a hazard for players. The eruption also dramatically changes the look of the map from a beautifully clear sunny day with long site lines to a grim, dark foggy map with much less visibility.

The Bone Crusher is a combination shield and mace that is devastating to the ZED horde. It’s extremely versatile, allowing you to perform quick, light attacks with the mace, send ZEDs flying with a powerful shield bash, or use the shield to block and parry the incoming ZED attack barrages. It’s the perfect weapon for Berserkers who want to go all melee with their most powerful weapon, as they now have an alternative to the Eviscerator.

The Dual Perk weapon system allows some weapons to belong to more than one Perk when they are a natural fit, increasing the weapon variety for some of the Perks. For example you can now use the Vlad 1000 Nail Gun, The Incendiary Trench-gun, or the Medic Shotgun with the Support Perk. Another example is that the Commando Perk can now make use of the Medic Assault Rifle, or the M16 M203 Assault Rifle when facing off against the ZED hordes.

What’s scarier than a Gorefast with one arm and one blade? How about a tougher, more powerful Gorefast with two arms, two blades, new attacks, and a massively creepy mutated tongue? Enter the Gorefiend. The Gorefiend has a greater chance of spawning on higher difficulties and definitely shakes things up with his powerful and devastating spin attacks.

All is not doom and gloom, though. Sometimes we need a little light-heartedness to break up the horror and gore. We’ve added all new Emote animations that players can trigger during gameplay. One Emote comes for free and the rest are available from opening an Emote crate that can drop during play. If you’re not into opening crates, you now have the option to recycle them into cosmetic or weapon skin material that you can eventually craft into new items instead.

The Tropical Bash Content Pack is available for free on PSN for all owners of Killing Floor 2. If you haven’t picked up Killing Floor 2 yet you can get it for 33% off from Jan 19 to 23 on the North American PlayStation Store.