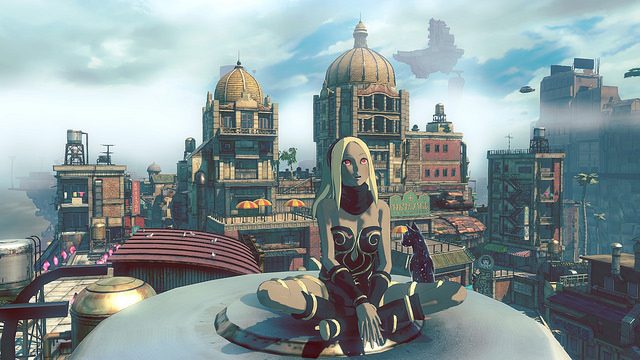 It’s time to take gravity for a spin. The colorful, dizzying, and pulse-pounding world of Kat comes spiraling back into the spotlight next week with Gravity Rush 2, out January 20 on PS4.

Continuing her search for answers, our high-flying hero Kat faces new enemies in the soaring open world of Gravity Rush 2. With Raven by her side, Kat must master three unique styles of gravity-bending combat in order to unravel the riddles of her origin and save the very universe itself from a terrible fate.

Neo-San Francisco, 2064 AD. Your life as a struggling journalist is interrupted by the world’s first sapient machine, a ROM (Relationship and Organizational Manager) named Turing. Together, you and the quirky robot will encounter a colorful cast of locals and overcome challenges as you uncover the city’s secrets behind the overlapping futures of technology and humanity. Can you survive in Neo-SF? Or will the mystery go unsolved?

Atelier Shallie has returned with additional features on PS Vita! Experience the world of Atelier through the expanded stories of the two Shallies as they meet characters from previous Dusk entries and use alchemy to fulfil their goals in this conclusion to the enchanting Dusk trilogy.

Dead Effect 2 is a sci-fi horror first-person shooter set aboard a derelict colonization spaceship. Stand up to the challenge as an elite soldier and try to seize control of the monster-infested ship.

Experience lightning-fast battlefield action across an epic story! In the digital realm of SE.RA.PH, the Holy Grail War is over, but the land’s new ruler faces challenges and threats from all sides. Those Servants who survived the war now find themselves drawing up tense and unlikely alliances, preparing for a conflict that may tear SE.RA.PH apart… or destroy it entirely.

The Flame in the Flood: Complete Edition
PS4 — Digital

The Flame in the Flood: Complete Edition is a wilderness survival game in which a girl and her dog travel on foot and by raft down a procedurally-generated river. Scrounge for resources, craft tools, remedy afflictions, evade the vicious wildlife and, most importantly, stay healthy in a dangerous wilderness.

Another mind-bending adventure awaits gravity queen Kat as a new danger emerges to threaten the fabric of the universe itself. Still searching for clues behind the mystery of her origin, and with the powerful Raven at her side, Kat must master three unique gravity attack styles as she takes on enemies and massive bosses.

Somewhere along the venerable Route 7, in the middle of nowhere, you will find Joe’s Diner. As an employee working the graveyard shift for the next month, your primary task is to keep the tables clean — no tough challenge at all. Unfortunately, the old diner was built on the site of a burial ground…

Quest of Dungeons is a turn-based dungeon crawler and a roguelike, featuring a good old 16-bit retro artistic look. An evil Dark Lord has stolen all the light, so your mission is to enter his lair and defeat him. By playing as either a Warrior, a Wizard, an Assassin, or a Shaman, you have to traverse dungeons, defeat enemies, and loot everything you can in order to survive.

Get ready for intense combat action as you battle Grimm across familiar locations of Remnant including new areas never before seen in the show. Play as Ruby, Weiss, Blake, and Yang in this character-driven adventure that explores new storylines, new Grimm types, and a new villain!

Play through the Knight campaign as you battle against the tribal Lizardmen or enjoy the groundbreaking PvP combat system that will deliver fast-paced real-time strategy action or tactical turn-based gameplay. The objective of each battle is to destroy the opponent’s keep. Players can decide to either quickly attack an opponent’s base, adopt a more defensive strategy by fortifying their own headquarters, or maintain a balance of offense and defense.

Welcome to the incredible world of Supermagical, where bubble popping has never been so much fun! Supermagical is a unique puzzle adventure with a rich world to explore, an award-winning soundtrack, and tons of powers, spells, pets, and mounts to unlock.