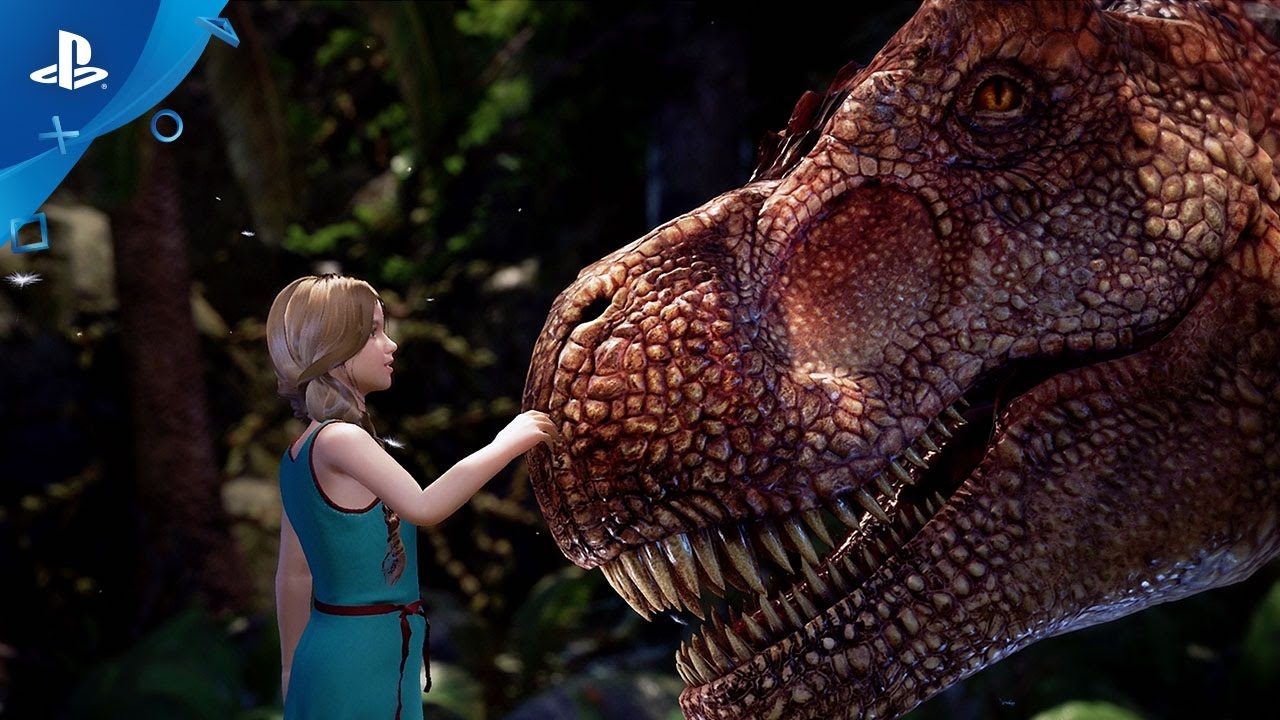 We’re ecstatic to announce that ARK Park, a virtual reality experience based on the world of ARK: Survival Evolved will be coming to the PlayStation VR in 2017! ARK Park is a virtual reality experience like no other, allowing players to get up close and personal with dinosaurs and also the immersive primal environments. Explore tropical rainforests, snow-covered mountains, and expansive plains, along with the dinosaurs that call these habitats home.

Visitors to ARK Park will be able to head out on Excursions into the lush biomes to explore and witness dinosaurs up close. At various points during the Excursions, visitors will be on-foot, riding dinosaurs, or riding vehicles. While on these Excursions, visitors will be able to participate in Gene collection of these fantastic creatures. Through crafting of ARK tools, lures, and weapons, visitors may collect Gene Cubes from the many dinosaurs and extinct creatures throughout the habitat, including more than 100 unique species.

However, collecting all of the ARK creatures can be challenging due to the reclusive habits of particular dinosaurs. Determined visitors will need to use a combination of puzzle-solving logic, action skills, exploration and careful resource management to bag the most prized animals. For visitors who would rather capture memories, ARK Park will also include a Snap mode where you can photograph these wondrous creatures for extra points! Capture images of your friends in precarious moments in multiplayer Excursions, or use your ARK Park selfie stick to record your own solo adventures for bonus points.

Capturing a creature’s Gene Cube will allow for you to upload it to ARK Park’s Hub area to learn more about the life form, including factoids and vital stats. Along with this, you’ll learn about how the ARK species has diverged from real-world variants. Gene Cubes may also be uploaded to the Hub’s Petting Zoo where visitors can get up close and personal with the creatures. In this scenario, visitors will be able to pet and feed dinosaurs, paint colors using the warpaint system from ARK, or even assign customizable cosmetics to creatures. If you have beloved creatures in ARK: Survival Evolved or ARK: Scorched Earth, you can upload your very own creatures from those games into the ARK Park’s Petting Zoo. View your favorite Black & Crimson T-Rex in life-size VR to truly appreciate the scale of your favorite pet!

ARK Park is in development by Snail Games’ Peacock Studio, in coordination with creative input from Studio Wildcard, for a release in 2017 on PS VR. We’re looking forward to providing an experience that is enjoyable and exciting both for veteran hardcore ARK survivors, as well as newcomers who want to interact with these majestic extinct creatures in VR for the first time!