Everything You Need to Know About Final Fantasy XV 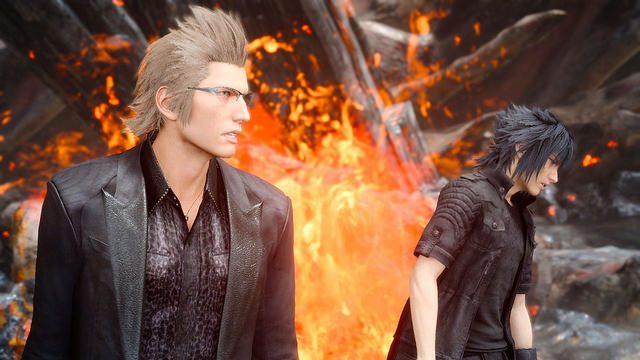 There are no spoilers ahead, so feel free to read without any worry. However, this blog is quite long. You’ve been warned!

Hi everyone! I’m excited to share this one-stop shop for everything Final Fantasy XV. Let’s distill it into 15 major points!

1.) Final Fantasy XV is right around the corner, launching on disc and PlayStation Store November 29, 2016 on PS4.

3.) The story of Final Fantasy XV is Noctis’ story. Noctis is the prince of the kingdom of Lucis. He is set to wed Luna. He’s sent away to find his bride to be with his three best friends — Prompto, Gladio, and Ignis — on a road trip using his father King Regis’ car, the Regalia.

As he is sent from his kingdom to wed his bride to be, he hears that under the guise of a peace treaty his kingdom is overtaken and invaded by the Niflheim Empire. He receives reports that his father, his fiancée Luna, and he himself are all reported dead.

Not quite sure who to believe or trust, he continues on his journey with his comrades to find out the truth and reclaim his rightful spot on the throne of the kingdom of Lucis. Pretty straightforward, right?

4.) Final Fantasy XV is completely open world. While there’s of course a main critical path to follow, you’ll realize you can do whatever you want in the first 10 minutes.

5.) The world is called Eos. It’s a massive world with multiple continents that are all completely different, vibrant, and sometimes dangerous.

6.) Combat has completely changed in this Final Fantasy. You only control Noctis, but you have four equipment slots for weapons, shields, or magic. The combat is silky smooth and doesn’t require waiting for your turn to attack. You can vary up your attack combinations by using the four equipment slots.

7.) Noctis’ warp strike is the single most awesome thing in the world right now. Noctis’ ability to throw his sword and warp from one place to another is a strategic ability that allows you to attack enemies from long distances (the further you attack from, the higher the damage multiplier), and allows you to get away mid-battle in case you need to do a quick heal, cast magic, or let your allies take care of mobs in battle.

Warp striking takes multiple forms in the game and can be leveled up quite significantly (see point 14) to become even more awesome than what you may have seen in videos or livestreams. There’s no one single image to show this, you need to experience this.

8.) Your team members’ roles in battle are critical. While you only control Noctis to attack, you can hold down L1 and use the D-pad to call on your teammates to do different abilities. There are lots of different team up attacks useful in different situations, whether in open environments, closed dungeons, against a single enemy, etc. Also, check out point 14 for further notes on making sure your party members are leveled up properly!

9.) Of course magic plays a key role. There are two kinds of magic — elemental magic and ring magic. I’ll focus on elemental magic for now. So the step-by-step process of magic is as follows. It’s simple, yet deceptively addictive…

10.) There are tons of weapon classes and individual weapons! I don’t want to spoil this for everyone out there, as it’s much more fun to find out the massive breadth of how many weapons Noctis can wield. There are, of course, one-handed and two-handed swords, small daggers, guns, shields, polearms, axes… and tons more! Keep an eye out, though — you may even be able to evolve your weapons…

11.) Leveling up does not immediately happen after each battle — take that into account! You’ll need to camp either in the wild at specific locations or designated places in towns like inns. If you die before you remember to camp or collect all the XP you’ve earned, you’ll lose it all!

12.) Picking up items! As stated in point 9, picking up items for magic is crucial. In addition to that, random items may be useful for a variety of quests. Don’t forget to explore every nook and cranny in the world of Eos.

13.) The Regalia is your father’s car. Throughout the game, you’ll have the Regalia. You can either manually drive it, auto drive, or do fast travel to get to your destination.

The radio is fully equipped with classic Final Fantasy songs and even a track from Grammy award winning DJ Afrojack! You can customize it not only aesthetically, but functionally as you progress. There are other modes of transportation in the game, like chocobos, but you’ll have to find those out yourself!

14.) The Ascension tree is the skill tree in Final Fantasy XV. We’re not using materia or a sphere grid to level up your skills this time around. The way it works is quite simple. After tons of different activities in the game, you’ll earn AP — Ability Points. You use the AP you’ve earned and apply it to level up your character depending on your gameplay style.

But be careful! The AP you earn is for all four party members, so make sure you don’t overpower Noctis and leave Gladio, Prompto, and Ignis out in the cold!

15.) All the Final Fantasy staples are still there. Chocobos, moogles, cactuars, behemoths, massive weapons, and summons (called Astrals in FFXV, so don’t call them Aeons, Espers, or Primals)!

I’m sure there are tons of questions you may have like “How long is it?” “Who’s the final boss?” “What summons are there?” “How many side quests are there?” But if you have just one question to ask the development team behind Final Fantasy XV, what would you want to ask them?