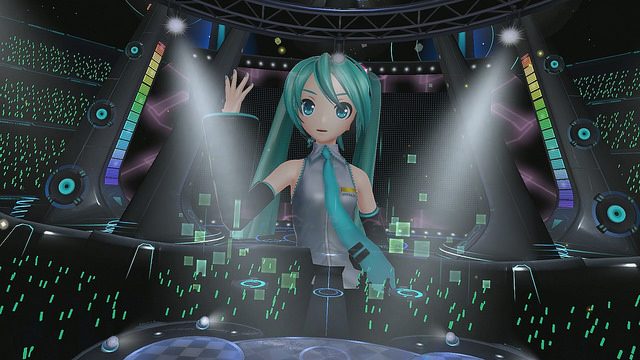 Greetings to all the Hatsune Miku fans out there in PlayStation land. It’s Sam Mullen, the North American producer for the Project Diva series and resident knower of all things Miku.

We know you guys are still coming down off your high from playing Hatsune Miku: Project Diva X which launched for PS4 and PS Vita a couple of weeks ago, but here we are again ready to talk about a totally new experience: Hatsune Miku in concert as you’ve never seen her before!

It’s not easy to put the Hatsune Miku: VR Future Live experience into words, and video pales in comparison. But when you don your PS VR headset and put on those headphones, you get transported to Miku’s world. Surrounded by thousands of screaming fans, you raise up your glowstick, swinging in time to the music. As you get more into the concert, waving your controller and singing along out loud, the concert reacts to you, showering the stage in light and effects that exceed the constraints of our boring old physical world.

Each Stage is comprised of a setlist of three songs, and you’ll have the option to choose between two songs for each set. And if everything goes just right, you will be transported to a special solo performance by Miku, just for you!

So, what songs can you choose from? Here are the tracks available in the first Stage.

Plus, there are tons of little things hidden in the concerts for you, such as special places you can call out and have special effects appear — but that’s all part of the experience, so try lots of things!

Oh, and PS VR and Miku doesn’t stop here. If you picked up Hatsune Miku: Project Diva X, be sure to check out the VR-enabling patch, which will be released alongside PS VR, that will enable you to view concerts you created using the Concert Editor in VR! While not the full VR Future Live experience, it will give you a small taste of what Miku + VR can be!

And if you aren’t convinced, be sure to check out the trial version of Hatsune Miku: VR Future Live, being released at the same time, which features a single song for you to try.

I’m super excited about Hatsune Miku coming to PS VR on October 13, and I hope you guys check it out!