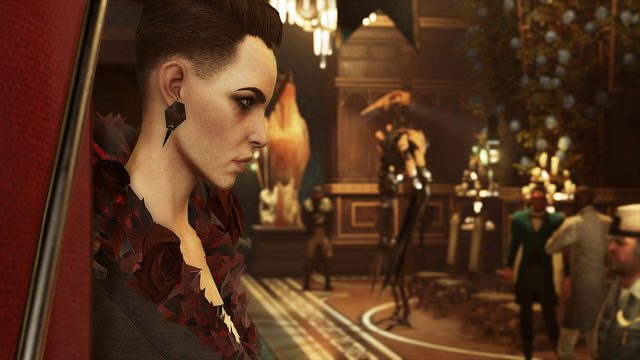 Arkane Studios’ Dishonored 2 is destined to be one of my favorite games of 2016, and not just because I loved the 2012 original. This stealth-action sequel is upping the ante on its predecessor in seemingly every way, pitting a pair of supernatural assassins against treacherous usurpers in a violent, vivid world.

Based on my hands-on experiences this week, the game is, quite simply, a bigger, better take on the original. Where Dishonored had one playable character, the sequel has two — papa Corvo and daughter Emily — each blessed with unique supernatural abilities thanks to the touch of the mysterious Outsider.

These supernatural abilities can alter the core action and stealth gameplay in some startlingly inventive ways. Sure, Corvo can instantly Blink past threats, even Possess a rat or fish to evade detection. But Emily can use Domino to invisibly bind multiple foes together, then take them all out with one blow, or use Shadow Walk to melt into the darkness.

Overall, the game’s scope feels bigger, more ambitious, and more varied than before. I played through a full mission set in the ominous Clockwork Mansion, an ornate death trap where walls and floors can shift and rotate like blocks in a murderous Rubix Cube. I was sent in to rescue a hostage and terminate (or compromise) mad inventor Kirin Jindosh before he finalizes an army of lethal Clockwork Soldiers.

True to Dishonored 2 form, I instead chose to remove Jindosh as a threat without killing him — I dosed him with a tranquilizer dart, then zapped away his intelligence using an experimental machine located in his laboratory. How merciful!

The choice between using lethal or nonlethal means to deal with your targets is central to the Dishonored experience, and I was pleased to learn that Dishonored 2 offers a larger arsenal of nonlethal takedown options.

As before, Dishonored 2 features a “Chaos” system that introduces consequences if the player racks up the body count, and which can ultimately alter the game’s ending. At the event, Creative Director Harvey Smith indicated that Dishonored 2 would feature a wider array of ending “permutations” as a response to fan feedback from the first game.

What’s more, Smith indicated that the consequences for slaying evil NPCs will be less severe — empowering morality-minded players to police the thoughts of natives using the Heart, a mystical artifact that reads minds and reveals secrets.

This revenge tale takes place in the deliciously morose, macabre city of Karnaca, which like Dishonored’s Dunwall, is as much a character as Corvo or Emily. The levels are positively riddled with fiction — notes, book excerpts, paintings, and audio recordings create a snackable narrative that I found endlessly fascinating. The Arkane team continues to design some of the most detailed, most interactive levels seen in modern game design, and I applaud them for it.

Seemingly no detail has been ignored. New character animations help the combat and traversal feel more grounded, more physical, in a way I’ve not seen outside of games like Mirror’s Edge.

Thus far, Dishonored 2 is shaping up to be one hell of a love letter to fans of this genre — it’s due out this November for PS4. Leave any questions in the comments!