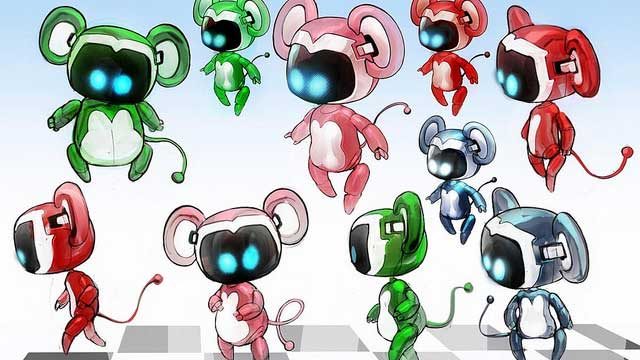 Konnichiwa! I’m Nicolas Doucet, creative director and producer of The Playroom VR in Japan Studio. Today, I’d like to tell you about how we created our VR characters.

Those of you who already know The Playroom on PS4 may remember the cute AR Bots who live inside the DualShock 4. As we began working on The Playroom VR, we wanted to continue using our robots and their visual identity to create a new cast of characters.

In Monster Escape, for instance, we created the VR 4, a group of super heroes matching the colors of the light bars on the controllers.

In Cat & Mouse, we turned our little robot friends into mice. Each one has its own way of walking, size, weight, and hiding props — for example, the green one likes to take cover inside broccoli to escape the cat!

However, the big addition to The Playroom cast of characters came through our new heroes: the VR characters!

As I explained in my previous post, The Playroom VR puts a big emphasis on multiplayer and so it’s common for the TV players to see the VR player’s head and body.

For our first test, we used a floating headset with eyes. But we soon needed to think about how each mini-game would introduce a strong and unique VR character, while retaining the overall Playroom feel.

We began drawing out what the headset should be like: recognizable as the PS VR headset but with a fun twist and a unique touch for each game. We eventually settled on a visor mounted on our VR characters so that the link with the real headset was obvious.

We also made sure that the blue LEDs, which are an iconic part of the PS VR headset, were very prominent. Where possible, we linked them to the gameplay, too. For example, in Monster Escape, the VR monster’s health is represented with the four blue corner LEDs. Those gradually get smashed in-game as the Monster’s stamina goes down.

The eyes of the monster are also displayed as an LED face on the faceplate of the headset, and show various expressions according to the gameplay (painful face, angry face etc.). Once our first VR character was created, we were able to roll out the same visual language to each game.

In Ghost House, we wanted to explain why the players on the TV were able to see a recorded feed from the VR Player, so we mounted him with a camera to the side.

Since Ghost House also uses a controller in VR, we turned the DualShock 4 into a fun ghost blaster, and physically hooked it up to the VR player via a soft cable.

Cat & Mouse was an interesting one. First of all, the eye shapes and the facial expressions of the headset had to be made quite animalistic to really feel like a cat. We also spent some time deciding whether it should have a neck or not. Unlike in Monster Escape, a stretchable neck proved to be really disturbing in Cat & Mouse (probably because we expect cats to be elegant) so to avoid an awkward visual, we simply detached all of its limbs, like in Rayman. That worked much better, as it is clearly meant to be a fantasy character.

Wanted! was also good fun because it played on classic Western genre caricatures. In the end, we settled for an eye patch because it gave the VR player an ambiguous feel, and a soft poncho because it made the VR player’s body movement fun to look at. The hat gave us a nice opportunity to slightly obstruct the player’s view and increase the feel of being a cowboy, too.

Going through this process, we were able to continue growing The Playroom’s cast of digital characters into a big, new family. Every new game was a fun brainstorm to come up with a hero character.

Do you have ideas for a fun VR character, and could you think of a theme that would be a good match? Please let us know in the comments below!